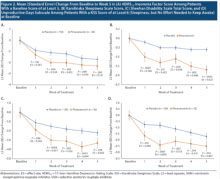 An Online Survey Study in India

Results: The response rate was 56.99%. The majority of respondents were aged 31–50 years, female, and working in urban areas. The mean ± SD total score of the respondents was 17.4 ± 2.36, with the lowest score being 10 and the highest score 22. More correct answers (98.1%) were recorded for the items “loss of confidence and poor self-esteem may be symptoms of depression” and “sleeping too much or too little may be sign of depression.” The mean total score of female respondents was higher than that of men, and the difference was significant (P = .003).

Here, the authors present a case of a patient with alcohol use disorder who developed an a...

Catatonia as Presenting Manifestation of Behavioral Frontotemporal Dementia: Insight From a PET/MRI Study

In this report, the authors discuss a case of behavioral frontotemporal dementia presentin...

Delayed Ejaculation in a Man and Premature Orgasm in a Woman: 2 Cases With a Common Suspect

In this case series, the authors describe a case of delayed ejaculation and a case of prem...