SPRAVATO® (esketamine) CIII Nasal Spray:
The First and Only N-Methyl D-Aspartate (NMDA) Receptor Antagonist Approved in Conjunction With an Oral Antidepressant for the Treatment of Adults With Treatment-Resistant Depression

SPRAVATO® (esketamine) CIII Nasal Spray is indicated, in conjunction with an oral antidepressant, for the treatment of treatment-resistant depression (TRD) in adults.

For decades, pharmacologic treatments for major depressive disorder (MDD) have focused on modulating the level of monoamine neurotransmitters in the brain.1 While antidepressants (ADs) have helped most patients with MDD, the landmark STAR*D trial2 found one-third of patients did not achieve remission by the third line of therapy.3 Remission rates were progressively lower in each subsequent therapy line and only 14% of patients achieved remission after the third line of therapy.3

For those with TRD, some patients may benefit from treatment with a different kind of medication.1,3 TRD may be defined as failure to respond to two or more antidepressants of adequate dose and duration in the current depressive episode.1,4

SPRAVATO®, the S-enantiomer of racemic ketamine, is the first and only treatment (in conjunction with an oral AD) formulated for nasal spray use in TRD (Figure 1).5 The mechanism by which it exerts its antidepressant effect is unknown.5 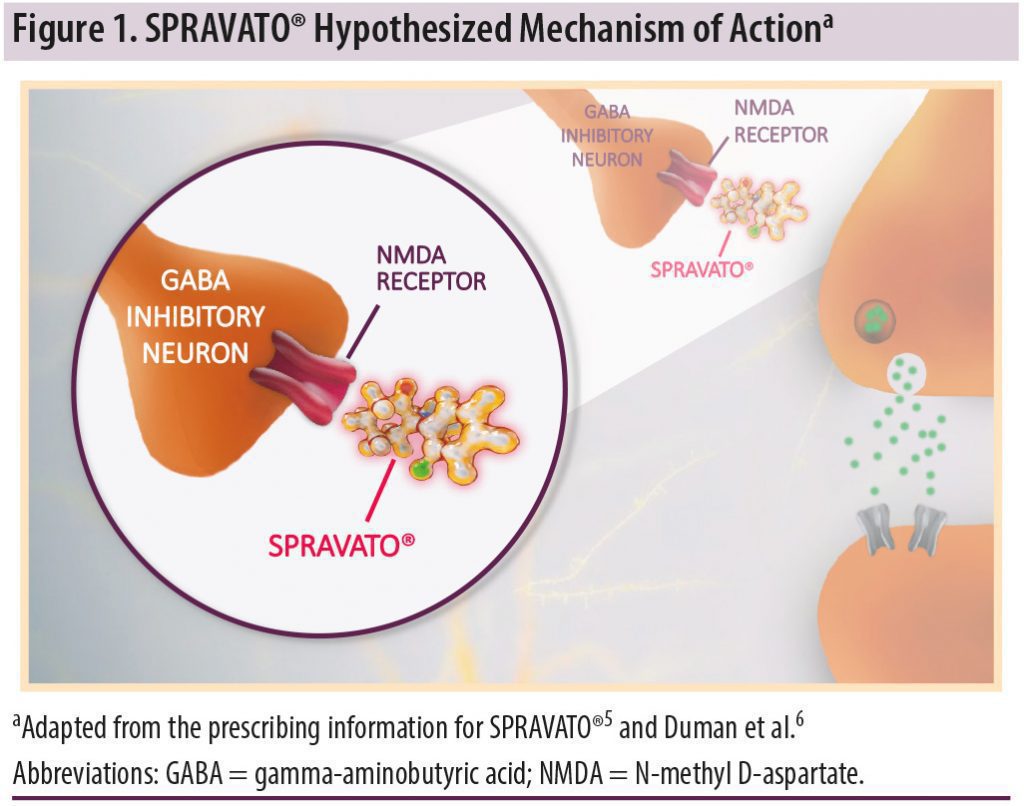 SPRAVATO® (esketamine) CIII Nasal Spray was evaluated for safety in more than 1700 adult patients with TRD.4 This program consisted of 5 phase 3 studies (3 short-term and 2 long-term) and 1 phase 2 study.5

Study 1 and Study 2 evaluated the efficacy and safety of SPRAVATO® plus a newly initiated oral AD in comparison to placebo nasal spray plus oral AD.7,8 In Study 1:

*MADRS is a 10-item, clinician-rated scale used to assess severity of depressive symptoms. Scores on MADRS range from 0 to 60, with higher scores indicating more severe depression.
†Observed at screening during Study 1. Patients with intent to act or recent suicidal behavior were excluded from the study.8

Study 1,7 was a pivotal phase 3, short-term (4-week), randomized, placebo-controlled, double-blind, multicenter trial in which the primary endpoint was change in MADRS score from baseline to day 28.7 Patients in both treatment arms were discontinued from their current oral AD to which they had previously not responded and initiated a new oral AD (Figure 2).7 The efficacy analyses included 223 adult patients randomized to receive flexible dosing of SPRAVATO® 56 mg or 84 mg plus an oral AD vs placebo nasal spray plus oral AD.7 SPRAVATO® plus an oral AD achieved superior improvement in depression symptoms vs placebo nasal spray plus and oral AD at Day 28. LS mean (SE) change in MADRS score: –19.8 in the SPRAVATO group vs –15.8 in the placebo group at Week 4 (P =.020).5

Study 28 was a long-term, randomized, double-blind, multicenter, controlled, maintenance-of-effect study conducted in adult patients with TRD who had achieved stable remission or stable response after 16 weeks of SPRAVATO® plus oral AD (induction and optimization phases).8 The primary endpoint was time to relapse during the maintenance phase among stable remitters (Figure 3).8

Stable remitters who continued treatment with SPRAVATO® plus oral AD:

The study also showed that patients who were stable responders to SPRAVATO® plus an oral AD and continued treatment were 70% less likely to relapse than patients who switched to placebo nasal spray plus oral AD during the maintenance phase (Figure 4).5 Additionally, time to relapse was significantly delayed in stable responders (2-sided P = .001).8

SPRAVATO® is contraindicated in patients with:

Suicidal Thoughts and Behaviors in Adolescents and Young Adults.

Discontinuation Rates Due to Adverse Reactions Were Less Than 5% Across the 2 Pivotal Short- and Long-Term Clinical Trials5,‡,§

In 2 short-term studies in adults <65 years old, 4.6% of adults treated with SPRAVATO® plus oral AD discontinued treatment vs 1.4% of patients who received placebo nasal spray plus oral AD (Figure 5).5

Across all phase 3 studies, adverse reactions leading to discontinuation were5: 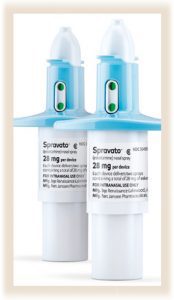 SPRAVATO® (esketamine) CIII Nasal Spray does not require daily dosing and should be administered in conjunction with an oral AD.5 SPRAVATO® is patient-administered with a single-use device that delivers a total of 28 mg of SPRAVATO® in 2 sprays (1 spray per nostril) with each device. SPRAVATO® is self-administered using 2 devices (for a 56-mg dose) or 3 devices (for an 84-mg dose), depending on the dose prescribed, with a 5-minute rest between use of each device to allow medication to absorb.5

Select Use In Specific Populations

Certified SPRAVATO® treatment centers must comply with full SPRAVATO® REMS requirements, which can be obtained at www.spravatorems.com or by calling 855-382-6022.

SPRAVATO® is the first and only NMDA receptor antagonist approved, in conjunction with an oral AD, for TRD in adults. It is for adults who have not responded adequately to at least 2 oral ADs of adequate dose and duration in their current depressive episode.

SPRAVATO® plus an oral AD demonstrated statistically superior improvement in depression symptoms after 4 weeks compared to placebo plus oral AD, based on the short-term study.5 In the long-term maintenance study, SPRAVATO® significantly delayed time to relapse in patients who were stable remitters on SPRAVATO®.5

For information on how to become a certified
SPRAVATO® treatment center, please visit
spravatotreatmentcenter.com