A Case of Creutzfeldt-Jakob Disease Presenting as Catatonia

To the Editor: Catatonia is a disorder of movement associated with cognitive, motor, and behavioral clinical signs and symptoms.1 The differential diagnosis of catatonia includes psychiatric and neurological conditions. We present a case of a man initially diagnosed with catatonia and treated with electroconvulsive therapy (ECT) who was referred for neuropsychiatric opinion following acute deterioration. A diagnosis of Creutzfeldt-Jakob disease (CJD) was made on the basis of clinical and imaging findings.

Case report. Mr A, a 61-year-old male electrical engineer, presented to a psychiatrist in August 2014 with 2 weeks of confusion, word-finding difficulties, slurred speech, and right-hand clumsiness. Ten years previously, he had developed a delusion that his wife was having an affair. He was treated with paroxetine and olanzapine, which led to resolution of symptoms, but he was unable to return to full-capacity work despite remaining on long-term medication. His background medical and psychiatric history was otherwise unremarkable. There had been no recent infectious contacts.

Mr A was admitted to a neurology ward with a provisional diagnosis of posterior circulation stroke. Examination showed no focal signs. Brain computed tomography and magnetic resonance imaging (MRI) results were reported as normal. Findings of blood tests including viral serology, thyroid hormones, vitamin levels, and antineuronal autoantibodies were negative. Provisional diagnoses of an adjustment or conversion disorder were suggested, and Mr A was discharged to his psychiatrist.

The patient’s wife noted continued deterioration over a fortnight, with difficulty communicating and following commands, groaning, upper limb posturing, and apraxia. He was readmitted to the hospital, but repeated examination, neurology review, and blood test results were unremarkable. On the basis of the presentation and history of psychosis, the patient was diagnosed with an atypical catatonic relapse and received 4 treatments of ECT. He continued to deteriorate, becoming dehydrated and tachycardic, with myoclonic jerks. He was referred for specialist neuropsychiatric opinion. 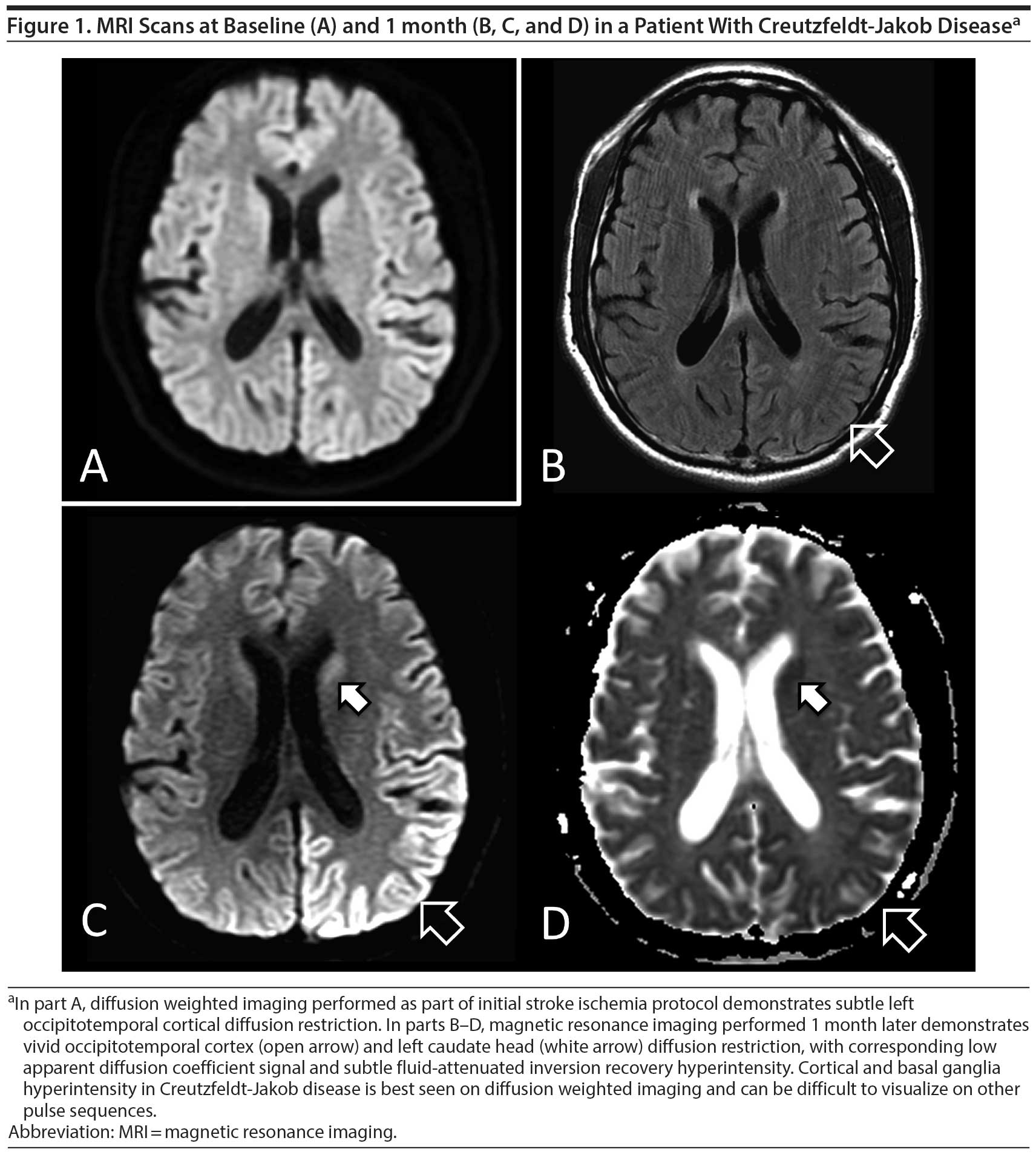 CJD, the commonest prion disease, occurs at a rate of around 1 in 1 million per year.2 Ninety percent of cases are sporadic (sCJD), 10% are familial, and less than 1% are iatrogenic or variant CJD. The typical clinical presentation is of a rapid cognitive deterioration with myoclonic jerks. Centers for Disease Control and Prevention criteria for probable sCJD require rapidly progressive dementia with 2 or more of the following: myoclonus, visual or cerebellar symptoms, pyramidal or extrapyramidal symptoms, or akinetic mutism, along with 1 or more positive findings on EEG (periodic sharp wave complexes), CSF (positive 14-3-3 protein), or MRI.1 Psychiatric symptoms including mood disturbance, behavioral disturbance, or psychosis may feature early in younger patients.3 Promising new tests with high sensitivity and specificity using CSF,4 nasal brushings (sCJD),5 or urine (variant CJD)6 have been recently described.

Imaging findings in CJD, particularly on diffusion weighted imaging (DWI) MRI sequences, are more sensitive than either EEG or CSF and may precede pathognomonic clinical features such as myoclonic jerks. Restricted diffusion on DWI in the basal ganglia, thalamus, or the cortex (“cortical ribbon sign,” Figure 1A-1D) is a classic finding early on, thought to result from a number of histopathological factors: vacuolation, accumulation of prion protein, and reactive gliosis.7 Although similar changes can be appreciated on T2, fluid-attenuated inversion recovery, and proton density sequences, these tests are far less sensitive, and the findings may be normal in a large proportion of patients.8 Later in the course of the disease, changes are more pronounced, leading to more widespread involvement and generalized atrophy.8