How Many Treatments Before Clozapine? Medication Choices Across the Spectrum of Treatment Resistance in Schizophrenia

How Many Treatments Before Clozapine?

Medication Choices Across the Spectrum of Treatment Resistance in Schizophrenia

For some patients with schizophrenia, antipsychotic medications will completely eradicate all psychotic (positive) symptoms. But most patients are not that fortunate and continue to experience psychotic symptoms despite taking medication. This reality brings us to some critical questions that come up frequently in practice. When are persistent psychotic symptoms acceptable? If the present symptoms are not acceptable, and a medication change is warranted, then which medication comes next?1

We often use response categories to guide medication choices. If a patient’s symptoms are within the boundary of what we believe to be a good response, then the patient is a "responder." Patients who seem to have no improvement with medication are categorized as "nonresponders" or called "treatment refractory." What about those who show some improvement with medication but are too symptomatic to be categorized as a responder? A common example is when antipsychotics are able to prevent acute relapse but the person is still burdened by psychotic symptoms every day. These are patients whose antipsychotic response is somewhere between full response and complete treatment resistance.

In this issue of the Journal, the study by Schooler et al2 carefully selected outpatients with schizophrenia who represented this middle group. Outpatients who were categorized as "moderately refractory" agreed to a 6-month course of treatment of either clozapine or risperidone. The study was randomized, and medications were given under double-blind conditions. The study was done at a time when less than half of the patients had any prior experience with risperidone. While the question of relative effectiveness of clozapine and risperidone is important on its own, the broader question of the role of using clozapine or any 1 of the 12 post-clozapine antipsychotic options across the spectrum of treatment-resistant schizophrenia is also very important.

Before discussing the results, let’s put this study into the larger context of treatment-resistant schizophrenia. The modern history of "treatment resistance" comes from the 1988 publication of the breakthrough study3 ("Clozapine for the Treatment-Resistant Schizophrenic," which is also known as "Study 30"). The definition of treatment-resistant schizophrenia was, by today’s standards, severe. The study took place in long-term inpatient facilities in which the average duration of current hospitalization was 2 years. All had been treated and failed at least 2 of the antipsychotics available at that time, including a prospective treatment of 6 weeks of high-dose haloperidol. If there was no improvement, only then were patients randomly assigned to clozapine or chlorpromazine. Clozapine-treated patients had a 30% response compared to only a 4% response for those assigned to chlorpromazine. Clozapine was approved in 1990 on the basis of this study, and the US Food and Drug Administration kept "failing 2 antipsychotics of a different class" as the main criterion for starting clozapine treatment. This criterion of "failing 2 or more antipsychotics" remains the standard definition of treatment-resistant schizophrenia to this day (see Figure 1A for a visual depiction of treatment resistance circa 1990). 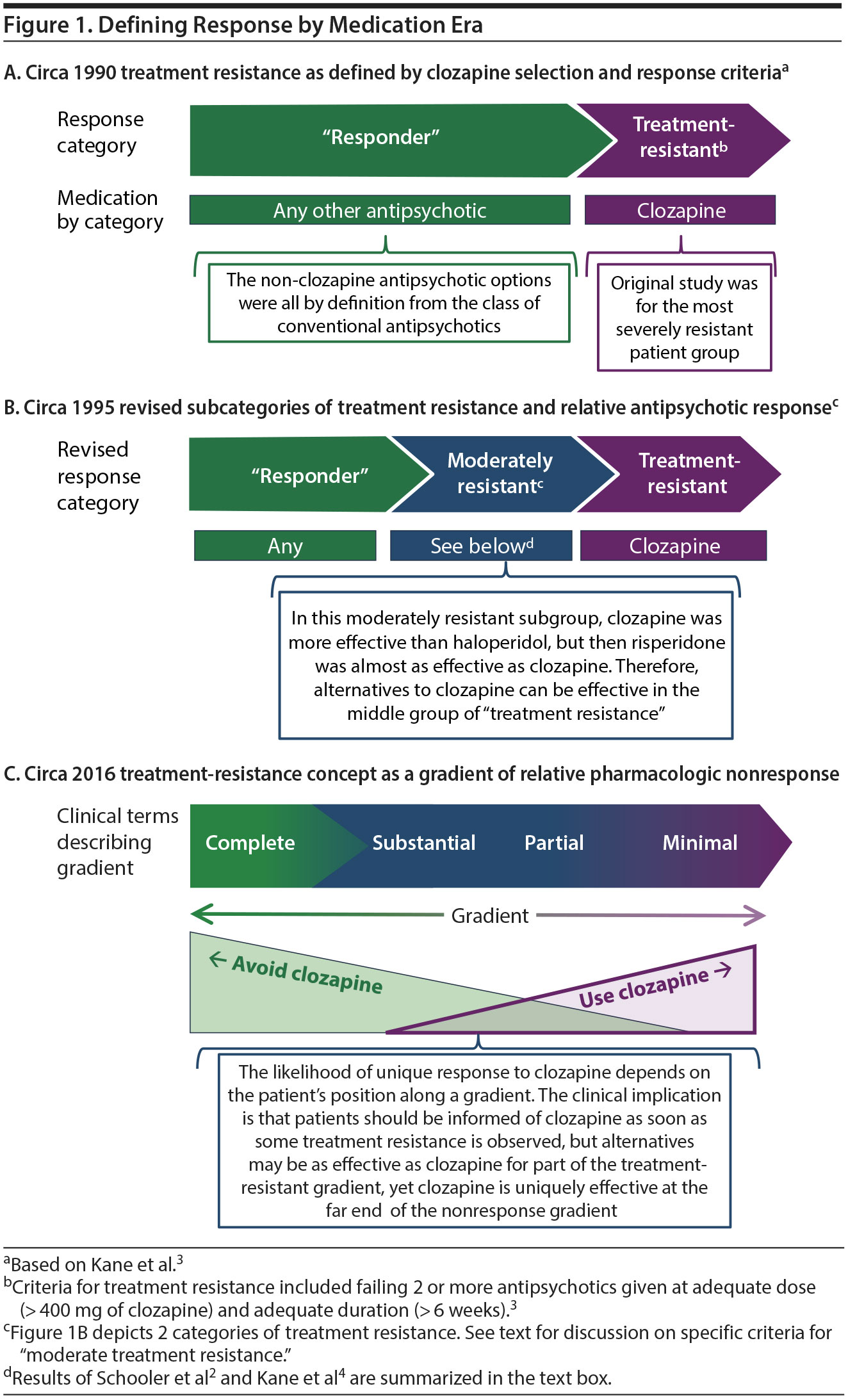 For the next 4 years after its approval in 1990, clozapine was the only "atypical" antipsychotic available. Given the dearth of other options at the time, a pressing question was whether clozapine was more effective than the other available medications for less gravely ill patients with schizophrenia. A predecessor4 to the current study2 was done when clozapine was the sole atypical antipsychotic, so haloperidol was chosen as a standard-of-care comparison to clozapine. Under double-blind conditions, "moderately refractory" patients were randomly assigned to a 6-month course of clozapine or haloperidol, the prevailing standard of care. Clozapine was indeed much more effective than haloperidol, with over 50% of clozapine-treated subjects meeting response criteria, which was twice the response seen with haloperidol. Clozapine also seemed more acceptable than haloperidol, with about two-thirds of clozapine-treated patients completing 6 months compared to about one-third for haloperidol-treated patients.4

The results of the current clozapine versus risperidone study by Schooler et al2 tell a very different story than its predecessor study of clozapine versus haloperidol.4 Over the 6 months of treatment, patients taking clozapine were somewhat more likely to respond than patients taking risperidone (71% for clozapine and 57% for risperidone), but the difference was not statistically significant. Although the overall likelihood of finishing the entire 29 weeks was about the same for both medication conditions, the reasons differed. Patients were more likely to stop risperidone early due to insufficient response (38% for risperidone vs 15% for clozapine; P < .05); however, patients taking clozapine were more likely to stop early because of tolerability problems. The finding that risperidone-treated patients had over a 50% chance of improving was a very encouraging result.2 Compared to haloperidol-treated patients from the prior study,4 risperidone-treated patients were twice as likely to achieve the same response criteria as those treated with haloperidol.2 So, in the present study of clozapine versus risperidone,2 clozapine retains (just barely) its title as being more effective for positive symptoms for "moderately refractory" patients, but risperidone was a close second. Put another way, clozapine is no longer the clear winner for the "moderately refractory" category. The results of the 2 studies together provide very valuable information on the sequencing and relative benefits and risks of clozapine across at least 2 categories of treatment resistance. Given the challenges of using clozapine, most patients in this category would probably choose risperidone before moving on to clozapine. However, some patients are so distressed by their symptoms that they would choose a clozapine trial sooner rather than later. Figure 1B illustrates the combined findings. When clozapine is chosen, it is important to be patient. The time course for response from clozapine is considerably longer than it was for risperidone. Risperidone response came earlier, so six weeks into treatment, the response rates were about the same. After 29 weeks, when the study ended, response to clozapine surpassed that of risperidone.

Failing 2 Antipsychotics Is No Longer Useful for Defining Treatment Resistance

The study by Schooler and colleagues2 shows that risperidone can sometimes match clozapine for some patients along a nonresponse gradient. This finding makes the current way treatment resistance is categorized harder to use as the best method to select appropriate clozapine patients. There is reason to think that at least some of the 12 post-clozapine atypical antipsychotics can also be effective across a gradient of treatment resistance. But our definition of treatment resistance as a way to decide on clozapine selection has not kept up. It is time to abandon the criterion of failing 2 antipsychotic trials as a proxy for treatment-resistant schizophrenia.

It has been almost 30 years since the publication of the major clozapine treatment-resistant study.3 In 1988, there were no atypical antipsychotics. At the time of Study 30,3 failing 2 antipsychotics was a proxy for the extreme end of the treatment-resistance spectrum. Today, by comparison, the usual patient who is considered to have failed 2 antipsychotics is not as ill as that and is more likely to fall under the "moderately refractory" umbrella. The relative risks and benefits of subsequent medication choices will depend on where the patient is along the nonresponse gradient. Therefore, clozapine criteria should be updated to account for the relative degree of nonresponse across a gradient. Patients who are somewhere in the middle range of treatment resistance have different response patterns to other, non-clozapine atypical antipsychotics.6 Clozapine will retain its position at the end of the gradient as the single most effective medication for persistent positive symptoms (as well as for suicide risk). In the middle of the nonresponse gradient, offering clozapine is still important, but there is at least a reasonable chance that other non-clozapine options would also be helpful.

Potential conflicts of interest: Dr Weiden has received grants and support from multiple pharmaceutical companies but has determined that they pose no conflicts relevant to this commentary on clozapine.