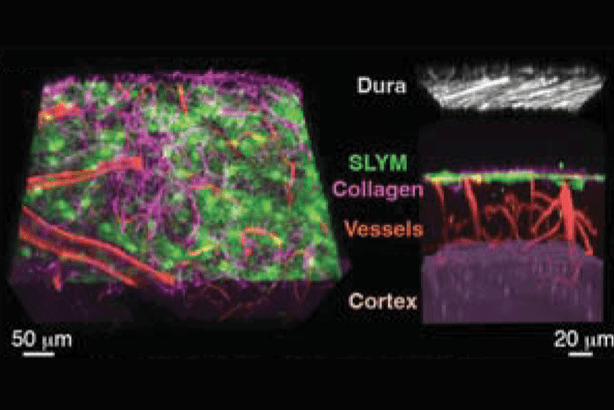 Clinical Relevance: A new discovery could lead to a better understanding of brain diseases and therapeutics

It was there all along, hiding, like Harry Potter’s cloak of invisibility. Using high-resolution two-photon excitation microscopy and fluorescent protein dyes, scientists from the University of Rochester and the University of Copenhagen identified a previously unknown structure that surrounds and protects the brain.

It’s easy to see why this slice of neural anatomy has gone unnoticed until now. The meningeal layer, called the subarachnoid lymphatic-like membrane, or SLYM for short, is very thin, delicate, and only a few cells thick. Yet scientists think it may have huge importance in brain function. Its discovery could have implications in how drugs and gene therapeutics are delivered to the brain and for understanding diseases like multiple sclerosis, Alzheimer’s, and other central nervous system disorders.

SLYM seems to act as both a protective barrier and platform from which immune cells monitor the brain for infection and inflammation, the scientists wrote in their Science journal article. It joins the dura, arachnoid, and pia mater as the fourth layer that encases the brain to wall it off from the rest of the body and keep it bathed in cerebrospinal fluid (CSF).

Why has SLYM slipped under the radar until now? Advances in neuro-imaging and molecular biology have enabled scientists to study the living brain at a level of detail they could only dream about even just a few years ago. Although much of the paper discusses the anatomy of SLYM in mice, the researchers report its existence in human brains as well.

“The discovery of a new anatomic structure that segregates and helps control the flow of cerebrospinal fluid in and around the brain now provides us much greater appreciation of the sophisticated role that CSF plays not only in transporting and removing waste from the brain, but also in supporting its immune defenses,” Maiken Nedergaard, one of the authors and co-director of the Center for Translational Neuromedicine at University of Rochester and the University of Copenhagen, said in a press release.

As the scientists wrote in their paper, SLYM is a type of membrane called mesothelium, which they already knew line and protect the margins of other organs in the body, including the lungs and heart. First author, Kjeld Møllgård, M.D, who is a professor of neuroanatomy at the University of Copenhagen, suspected that a similar membrane might also exist in the central nervous system. So the scientists fired up their high-powered scanners and went exploring.

Though tiny, the SLYM appears to have many jobs.

For one, it forms a tight seal around the brain allowing only very small molecules to filter through, thus acting as a kind of waste clearance system to separate clean from dirty CSF. The scientists suspect this function plays a role in the glymphatic system, itself newly discovered by a Møllgård-led team. As we sleep, this filtration structure flushes out the toxic proteins that build up during wakefulness, an insight that could open the door for further study of the glymphatic system’s role in brain diseases.

The SLYM may also be essential to the brain’s defenses, the researchers said. The membrane keeps native immune cells inside the brain while preventing external immune cells from entering. In addition, it hosts its own community of CNS immune cells that survey the surface of the brain, searching for signs of infection. Larger and more diverse concentrations of immune cells congregate along the membrane during inflammation and aging, the scientists noted.

Lastly, the SLYM acts as a buffer between the brain and skull as the brain shifts around inside the cranium. When the membrane was ruptured during traumatic brain injury, the resulting disruption in the flow of CSF impaired the glymphatic system and allowed non-central nervous system immune cells to leak into the brain.

The scientists said their latest discovery will help researchers learn more about the mechanics of the glymphatic system and gain a better understanding of its function and potential therapeutic applications. They were recently awarded a $13 million grant from the National Institutes of Health to continue studying the SLYM in both animal and human models.