The Top JCP Psychiatry Research of 2022 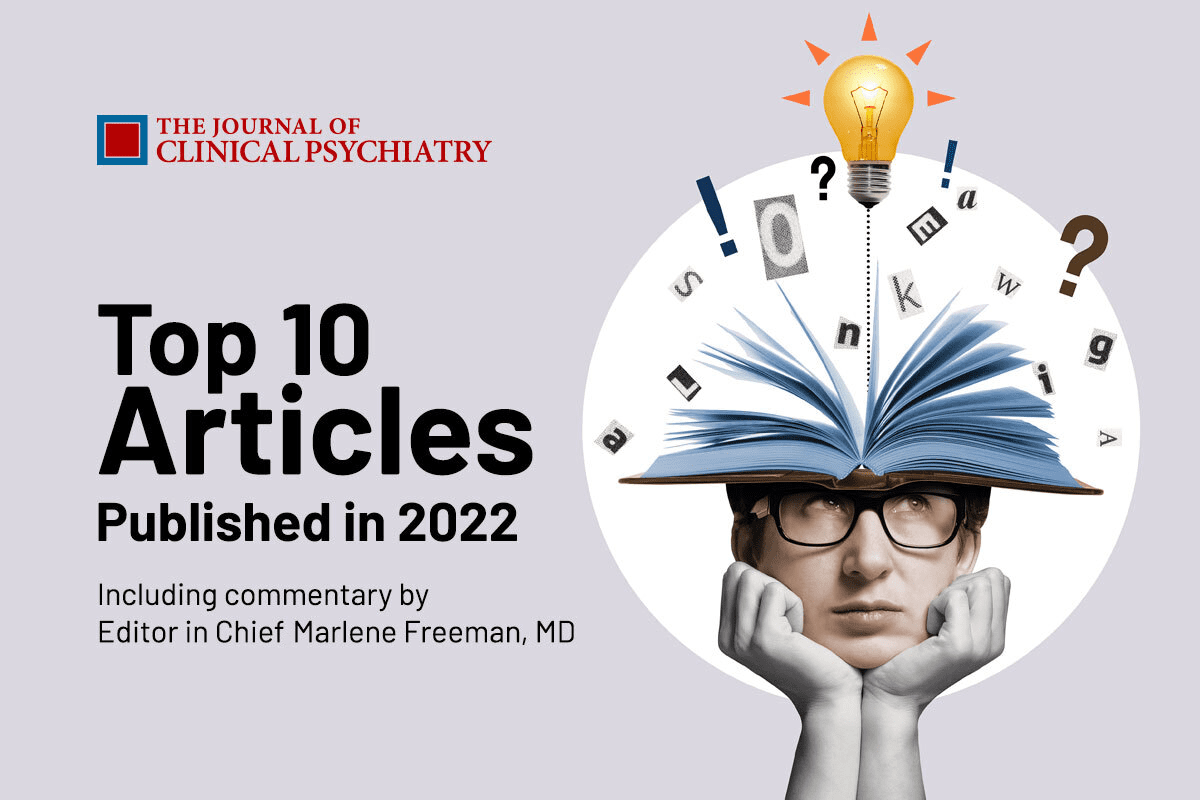 The rapid pace of change in psychiatric treatment was reflected in the top 10 most read articles published in The Journal of Clinical Psychiatry this year. Editor in Chief of the journal, Marlene Freeman, MD, pointed out that there has been tremendous interest in novel therapies and approaching old clinical problems in innovative ways.

“New classes of medications, including ketamine and psychedelics, neurosteroids, and other new treatments have the potential to treat depression in those who do not respond to standard antidepressants,” she said. “We are also excited about the potential of new treatments to act more rapidly to relieve suffering.”

Freeman said she is not surprised to see the topic of major depressive disorder and schizophrenia reflected in so many papers that made the list.

“While we continue to receive excellent papers on a range of topics pertinent to clinical psychiatry, the unmet needs in major depressive disorder and schizophrenia continue to be major challenges in our field,” she said.

Looking ahead, Freeman said the JCP will keep its focus on emerging data that propels the psychiatry field forward. She also expressed how seriously the journal takes its job serving the community of clinicians and clinical researchers.

Finally, she said she hoped to hear from fresh voices as we move into 2023. Although JCP published 176 pieces from 19 countries in 2022, Freeman said the journal will focus on expanding its viewpoint.

“We encourage junior colleagues to engage in peer review and academic writing,” she said. “We also are mindful of the need to reach diverse populations of patients, as well as build the JCP community to include more diverse authors, reviewers, and readers.”

To meet the goal of engaging early career colleagues, Freeman posted to a 3-part video primer on academic writing and reviewing.

Read on to see what caught the attention of our readers this year.

Striving for diagnostic certainty often fails psychiatric patients in the real world. Diagnostic ambiguity and “treating the symptoms” can sometimes be transformative, the authors of this fascinating case study argue. After 20 years of treatment failure, the subject achieved significant symptom relief when her primary complaint—“labored thinking”—was targeted specifically. However, because no seriously ill person has only one symptom, half a dozen clinicians from various subdisciplines weighed in on the patient’s other problems to suggest additional treatment.

9. Use of Ketamine From RCTs That Compared Ketamine With Electroconvulsive Therapy in Severe Depression

In the first of two ketamine papers that made our top 10 list, Chittaranjan Andrade, MD, looked at five randomized controlled trials to compare the benefits of racemic ketamine versus electroconvulsive therapy (ECT). The conclusion? ECT emerged as the clearly superior treatment, especially for older patients and those with psychotic depression. That said, he writes, ketamine remains a viable alternative to ECT due to sufficiently impressive response and remission rates.

The purpose of this trial was to evaluate the combination oral agent KarXT (xanomeline–trospium) in the treatment of schizophrenia. It found that KarXT provided clinically meaningful responder rates as early as two weeks into treatment. Relative to placebo, the combo drug demonstrated improvements in all five factors studied: positive symptoms, negative symptoms, disorganized thought, uncontrolled hostility, and anxiety/depression.

PTSD cost the US economy $232.2 billion in 2018. That’s nearly $20,000 per patient, and over $25,000 per patient in the military population. But in this article, the authors argued that the economic toll of PTSD goes far beyond direct healthcare costs. It carries a clinical burden that rivals other mental health conditions.

As we wrote about on Psychiatrist.com, psychedelics are suddenly a hot area of investigation. By carrying out a meta-analysis of individual patient data across eight clinical trials, British researchers uncovered evidence that psychedelic therapy has a positive effect on suicidality. However, they’d like to see additional studies to support the findings.

The diabetes drug, metformin, found its way to the top of our readers’ list thanks to an investigation looking at its use in treatment-resistant bipolar depression (TRBD). This early investigation suggests that reversal of insulin resistance with metformin could offer a path out of TRBD. Subjects benefited from a statistically significant and clinically meaningful reduction of depressive symptoms.

Antipsychotics have been the go-to treatment for schizophrenia for more than 70 years, but its mechanisms leave many symptoms unresolved. Enter a slew of new and potential treatments that address the complex structural and molecular changes this condition creates throughout brain circuits. This “InfoPack” was based on a series of teleconferences by three experts on schizophrenia.

Our dedicated readers weren’t the only ones interested in how beneficial ketamine is in treating depression. This article got wide pick up from major news sources and was the subject of a fascinating LinkedIn Live where authors Patrick Oliver, MD and Albert J. Arias, MD, MS discussed how ketamine went from hospital anesthetic to a potential wonder drug in treatment resistant depression. “In two weeks, we can take somebody from being suicidal to non-suicidal. It’s a total game changer,” Oliver said.

2. Efficacy and Safety of AXS-05 in Patients With Major Depressive Disorder

Successful treatment for depression was very much on the minds of our readers in 2022. In this phase 3 GEMINI (Glutamatergic and Monoaminergic Modulation in Depression) study, researchers concluded patients with MDD who were treated with dextromethorphan-bupropion (AXS-05) saw  significant improvements in depressive symptoms compared to placebo after just one week. Further, the treatment was well tolerated.

With marijuana now legal in 21 states and Washington, D.C., and medical marijuana legal in 38 states plus D.C., it’s no wonder this was our most read story of the year. Clinicians are seeking to learn all they can about the effects of cannabis on physical and mental health and this investigation provided important information about its use in treating anxiety. Here, researchers found that cannabis does indeed reduce the severity of anxiety and had an adequate safety profile for young people with treatment-resistant anxiety disorders.