To the Editor: Superior vena cava syndrome (SVCS) is a manifestation arising from compression or obstruction of the superior vena cava (SVC), characterized by edema of the face, neck, trunk, and upper extremities as well as collateral venous distension of the neck and anterior chest wall.1 Mostly caused by mediastinal malignancies, SVCS can be secondary to SVC thrombosis in 1%-5% of cases.2 Amphetamine-type stimulants have been extensively associated with psychiatric conditions, namely mood and psychotic episodes. They can also cause systemic effects3 including vascular conditions.4

The present case highlights for the first time an association between psychosis and SVCS in a patient with a history of methamphetamine abuse.

Case report. Mr A, a 24-year-old man, presented with acute agitation and aggressive behavior. At admission, self-neglect, delusional speech, auditory and cenesthetic hallucinations, inappropriate uncontrolled laughter, perseveration, and misrecognition were reported. No medical history or previous admission was reported, and no medical record was available. He was homeless, and all of his relatives lived in Morocco.

After an initial 3-day sedation, he was hospitalized in the psychiatry department for 6 months. 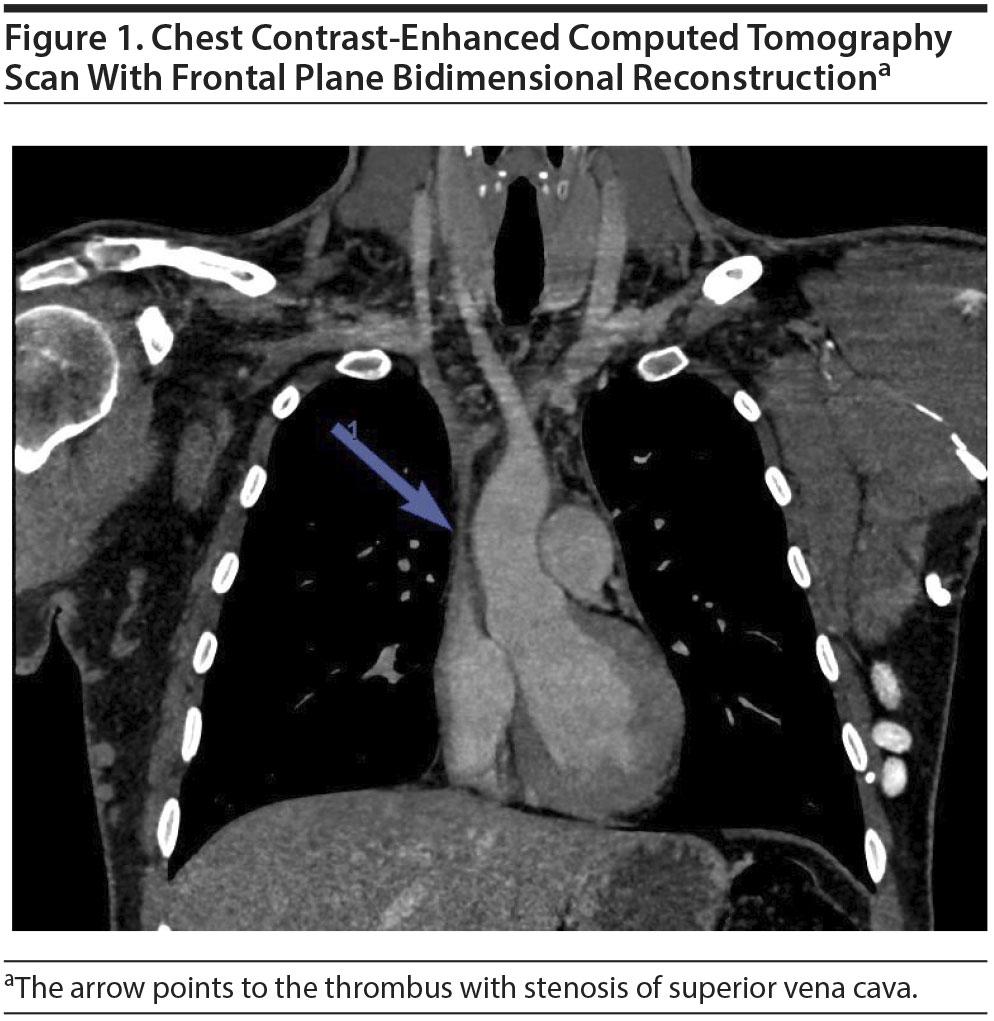 The patient was first administered risperidone 6 mg/d without success. Olanzapine 20 mg/d was stopped because of weight gain, and aripiprazole 15 mg/d was discontinued after akathisia onset. Mr A’s symptoms were alleviated with clozapine 350 mg/d.

Due to the improvement in psychotic symptoms, the patient’s medical history was then reported and included acute rheumatic fever at 11 years of age, first drug abuse at 18 (with occasional cannabis and cocaine abuse), and, at the age of 24, high doses of crystal methamphetamine ("ice") sniffed over 10 days.

Mr A could remember clearly the sudden swelling of his upper limbs, face, neck, and trunk that had occurred the day after his last use of crystal methamphetamine and persisted ever since. Collecting data about his medical condition during the year before his admission has not been possible, and the date of onset of psychosis could not be specified due to memory loss and the absence of relatives. Pathological traveling across Libya, Serbia, and Germany during the weeks before admission suggests that the psychosis had been occurring for several weeks at the time of admission.

Despite several radiologic interventions, the thrombus was unremovable. Tinzaparin was replaced by an oral anticoagulant, rivaroxaban.

Amphetamines are well known to induce both psychotic symptoms7 and venous thrombosis (cerebral8 or renal9). However, the present case report is the first to relate amphetamine-induced schizophrenia with deep venous thrombosis, prior to psychotropic medication use and without coagulation disorders.

In this case, methamphetamine had been taken in its crystal form, believed to be particularly harmful because of its high potency compared to other forms.10

The self-reported sudden swelling highlights the chronological relationship between crystal methamphetamine and thrombosis. This is consistent with data suggesting that thrombotic SVCS is more brutal than compressive SVCS.11

Amphetamines have a direct vascular toxicity that may be due to the induction of inflammatory genes in small vessel endothelial cells.12

It has been hypothesized that psychosis may result from microvascular brain damage.13 This risk may be particularly increased in case of genetic predisposition. Inflamed microvessels lose their coupling with astrocytes, leading to dysregulated cerebral blood flow and damaged blood-brain barrier.13 The direct action of methamphetamine on vascular endothelium may induce acute opening of the blood-brain barrier, while striatal effects and resultant neuroinflammatory signaling could lead to its chronic dysfunction.14

Schizophrenia has been extensively associated with abnormal immuno-inflammatory processes.

Future studies should determine the prevalence of SVCS in subjects with schizophrenia who have a history of methamphetamine use disorder in order to develop prevention and treatment strategies.