Lithium-Induced Fixed Drug Eruption in a Case of Bipolar Mania

Lithium-Induced Fixed Drug Eruption in a Case of Bipolar Mania

To the Editor: Lithium is one of the commonly used drugs for the treatment of bipolar affective disorders. Its use is associated with various side effects, dermatologic side effects being one of them. Dermatologic side effects can be one of the reasons for poor compliance and are reported in 3%-45% of the population receiving lithium. Mohandas and Rajmohan1 found acneiform eruptions, psoriasis, maculopapular eruptions, and follicular eruptions to be most commonly reported. However, fixed drug eruption due to the use of lithium carbonate has not been reported. We report one such case in a patient with bipolar mania.

Case report. Mr A, a 16-year-old male diagnosed with bipolar affective disorder as the second episode of mania with psychotic symptoms according to ICD-10 criteria, reported for follow-up. A maintenance dose of tablet lithium carbonate 900 mg/d was effective until the past year. At this visit, he reported blisters over the dorsal aspects of the hands and foot, with lesions extending to the mouth and genitalia. After 2-3 days, the blisters had subsided and were now seen to have been replaced by a hypopigmented patch surrounded by hyperpigmented border over the same areas (Figure 1). The lesions were associated with itching and disappeared after a few days of treatment with povidone-iodine (Betadine) application and multivitamin capsules. 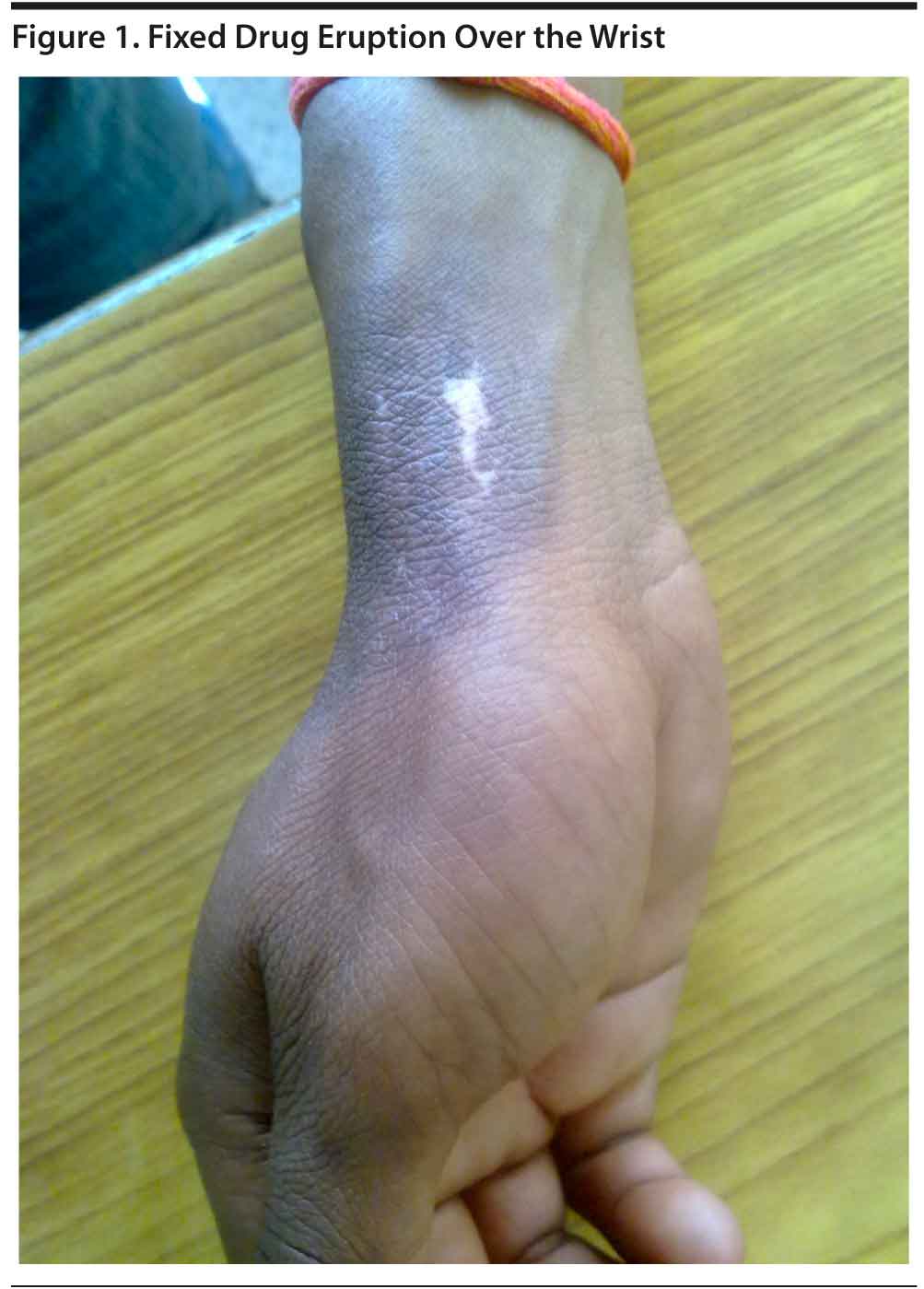 Mr A attributed the lesions to the antidiarrheal medication taken during one of those instances and continued taking lithium carbonate in the same dose. His serum lithium level was within the therapeutic range at this visit. However, the lesions recurred in a similar manner a month later on 2 successive occasions. On consultation, lithium carbonate therapy was stopped because lithium carbonate was considered the possible precipitant. A rechallenge was done in a low dose, after which the lesions appeared again, thereby confirming lithium to be the likely cause. The Naranjo Adverse Drug Reaction Probability Scale2 was applied with a score of 6, suggesting that lithium carbonate was the probable cause of the side effect. Mr A was subsequently started on tablet sodium valproate (1,000 mg/d) and olanzapine (10 mg/d). He was maintaining well for 4 months after the change in medications but was lost to follow-up.

The exact cause for the cutaneous side effects associated with lithium is not known, but the role of stress and psychological factors has been proposed. Kansal et al3 state that the decrease in cyclic adenosine monophosphate and inositol that results from lithium treatment has also been considered as a possible cause. The low intracellular levels of calcium, the lack of differentiation of keratinocytes, and enhanced phagocytic activity of leukocytes have been suggested as the possible mechanisms of action. Reduction in the dosage apart from specific intervention for the lesions has been suggested as a possible treatment strategy.