Sleep Disturbances in a Patient With Bipolar Disorder

Sleep Disturbances in a Patient With Bipolar Disorder

To the Editor: Sleep disturbance could be the initial manifestation of bipolar disorder. We report a case of undiagnosed bipolar II disorder in a patient who presented to the sleep clinic with complaints of insomnia. Objective testing with actigraphy detected an irregular sleep-wake schedule and very little sleep time with extended periods of wakefulness and activity in a 2-week period during the hypomanic phase of bipolar disorder. To our knowledge, this is the first actigraphic illustration of sleep disturbances occurring during a hypomanic or manic episode.

Case report. Mr A, a 22-year-old male professional athlete, was referred to the sleep clinic with a complaint of trouble falling asleep, which began when he was in high school. He noted that the only thing that had helped his insomnia was marijuana. Insomnia and the accompanying marijuana use had put his career as a professional athlete at risk.

On interview, he noted an irregular sleep-wake pattern and stated that it was common for him to have periods of up to 40 hours of being awake. He denied daytime sleepiness, and his history was not suggestive of restless legs syndrome, narcolepsy, or sleep apnea. He had tried trazodone and melatonin to help with his sleep with no benefit. He denied drinking excessive amounts of alcohol or using other recreational drugs. He claimed that his last use of cannabis was 45 days prior to the visit, and the urine toxicology result was negative for illicit drugs.

On further questioning, he endorsed 5 prior depressive episodes, each lasting 2 weeks or longer, during which he experienced anhedonia, low energy, worsening anxiety, difficulty concentrating, and negative thoughts and a pessimistic outlook toward life. He acknowledged at least 2 episodes of 4 days each during which he experienced elevated mood, irritability, decreased need for sleep (typically sleeping 3 to 4 hours per day), heightened thought and speech velocity, easy distractibility, and an increase in goal-directed activity. He had not been previously diagnosed with any medical or psychiatric disorders and was not taking any medications. His body mass index was 39 kg/m2 and neck circumference was 43 cm. His blood pressure was within normal range, his oropharynx Friedman palate position was grade II, and examination of his cardiovascular and respiratory systems revealed no abnormalities. His mood was euthymic, his affect was mood-congruent and reactive, and there was no indication of thought disorder.

Two-week wrist actigraphy obtained just prior to the visit, as is customary at our tertiary-level sleep center for out-of-state referrals, revealed a mean sleep time of only 1 hour and 21 minutes (range, 0-8 hours and 7 minutes) and a very low sleep efficiency of 24.07% (range, 0%-95.47%; normal ≥ 85%) (Figure 1). The study demonstrated no consistent sleep time with some extended periods (including one of almost 54 hours’ duration) of continuous activity with no indication of sleep. In conjunction with the clinical history, it was thought that the erratic sleep schedule, significantly short sleep duration, and increased activity captured on actigraphy most likely represented a hypomanic episode. 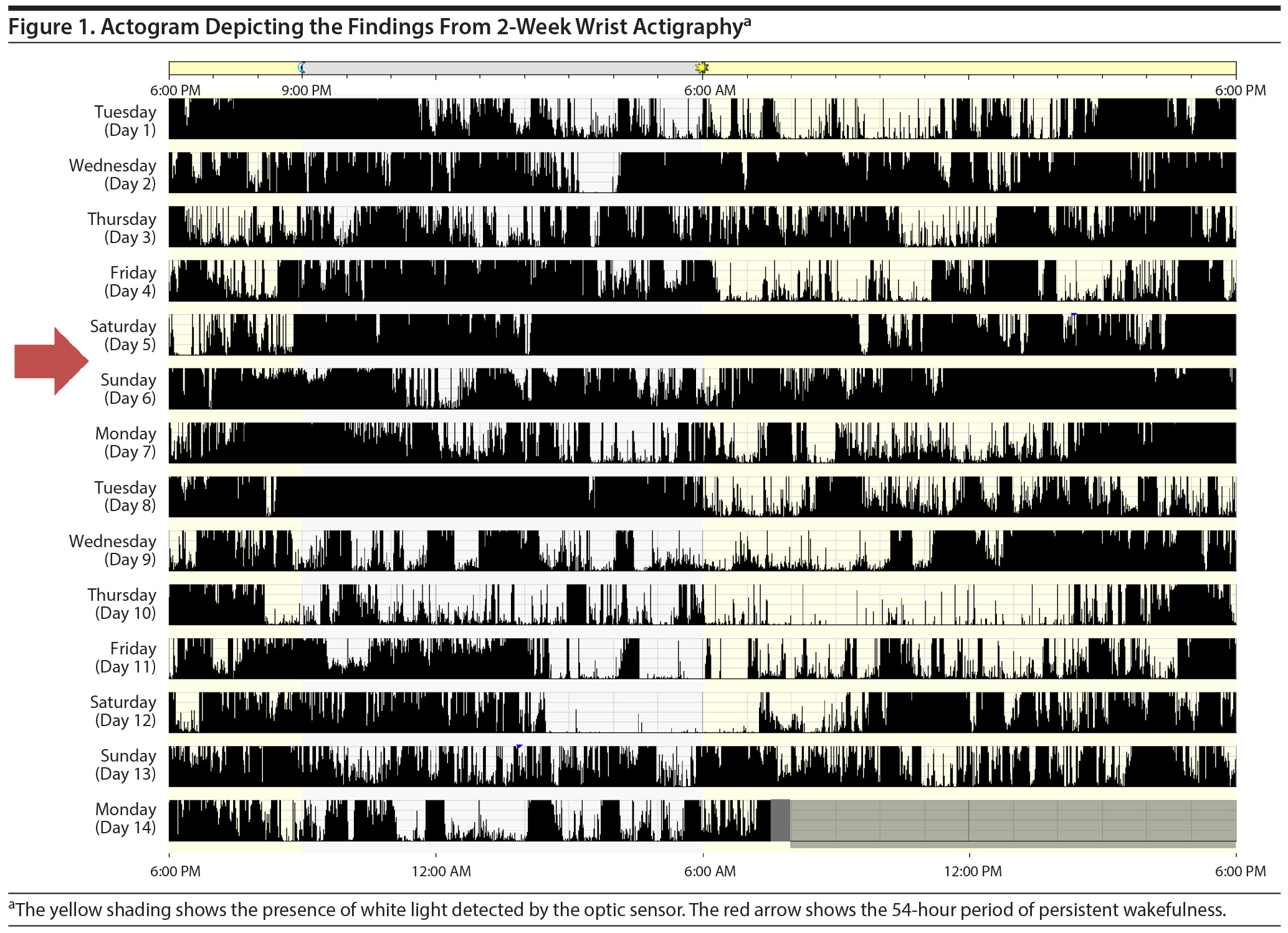 Overnight polysomnography with the administration of zolpidem 10 mg conducted on the same date as the clinic visit to rule out sleep-disordered breathing and periodic limb movements of sleep revealed normal sleep with no evidence of these disorders. All laboratory tests including thyroid-stimulating hormone were within normal range. Following referral to a psychiatry mood clinic, the history was corroborated, and a diagnosis of bipolar II disorder was made on the basis of DSM-5 diagnostic criteria.1 The patient was started on medication and advised to follow up with his local psychiatrist.

We report the case of a patient with bipolar II disorder who presented to a sleep clinic with complaints of insomnia. Actigraphy detected decreased sleep time, prolonged wakefulness, and increased activity in a 2-week period during the hypomanic phase of bipolar disorder that helped confirm the diagnosis of bipolar II. To our knowledge, this has not been demonstrated on actigraphy before.

Patients with bipolar II disorder could remain undiagnosed for years due to less severe symptom profiles. As in this case, patients may present to a sleep clinician first with complaints of sleep disturbance. A thorough investigation for a past history of symptoms suggestive of mania or hypomania or depression is warranted in these patients, as disrupted sleep could be a harbinger of a mood disorder. Although a detailed history remains the cornerstone of evaluation for mood disorders, the use of actigraphy to objectively evaluate sleep duration and physical activity may aid in the assessment of these patients.

Acknowledgment: This work was performed at Mayo Clinic, Rochester, Minnesota. Informed consent was obtained from the patient for use of the medical record for research, and research authorization is on file at Mayo Clinic. Information has been de-identified to protect anonymity.