To the Editor: Major depressive disorder is a heterogenous disease considered as a cluster of symptoms associated with disordered processing within specific neurobiological circuits. We report the case of a patient suffering from a melancholic depression with Capgras’ and Cotard’s delusions in which the clinical picture was associated with a particular pattern of cerebral activity.

Case report. Mr A is a 72-year-old man, who was brought to the emergency service with complaints of insomnia, nonsense talk, and aggressive behavior. For 2 weeks, Mr A had lived in complete withdrawal and showed great suspicion toward close relatives and friends. He also presented a depressed mood, pessimism, major sleep disturbances, and marked weight loss.

Mr A’s psychiatric history was notable for at least 2 depressive episodes that were not treated. Although he lived in a retirement home, he had full cognitive ability and maintained a reasonable level of autonomy.

At the initial assessment, Mr A claimed that his relatives had been replaced by actors. He also told us that his body vanished and that the devil replaced it with a younger one.

Throughout the following month, Mr A dramatically improved. A second brain SPECT performed at 5-week follow-up showed a persistent prefrontal hypoperfusion. To further explore brain perfusion, the second SPECT was subtracted from the first one using a computer-aided method. A statistically significant increased perfusion (> 2 SD) was shown in the anterior cingulate (ACC) and the left anterior insula (LAI) (Figure 1). 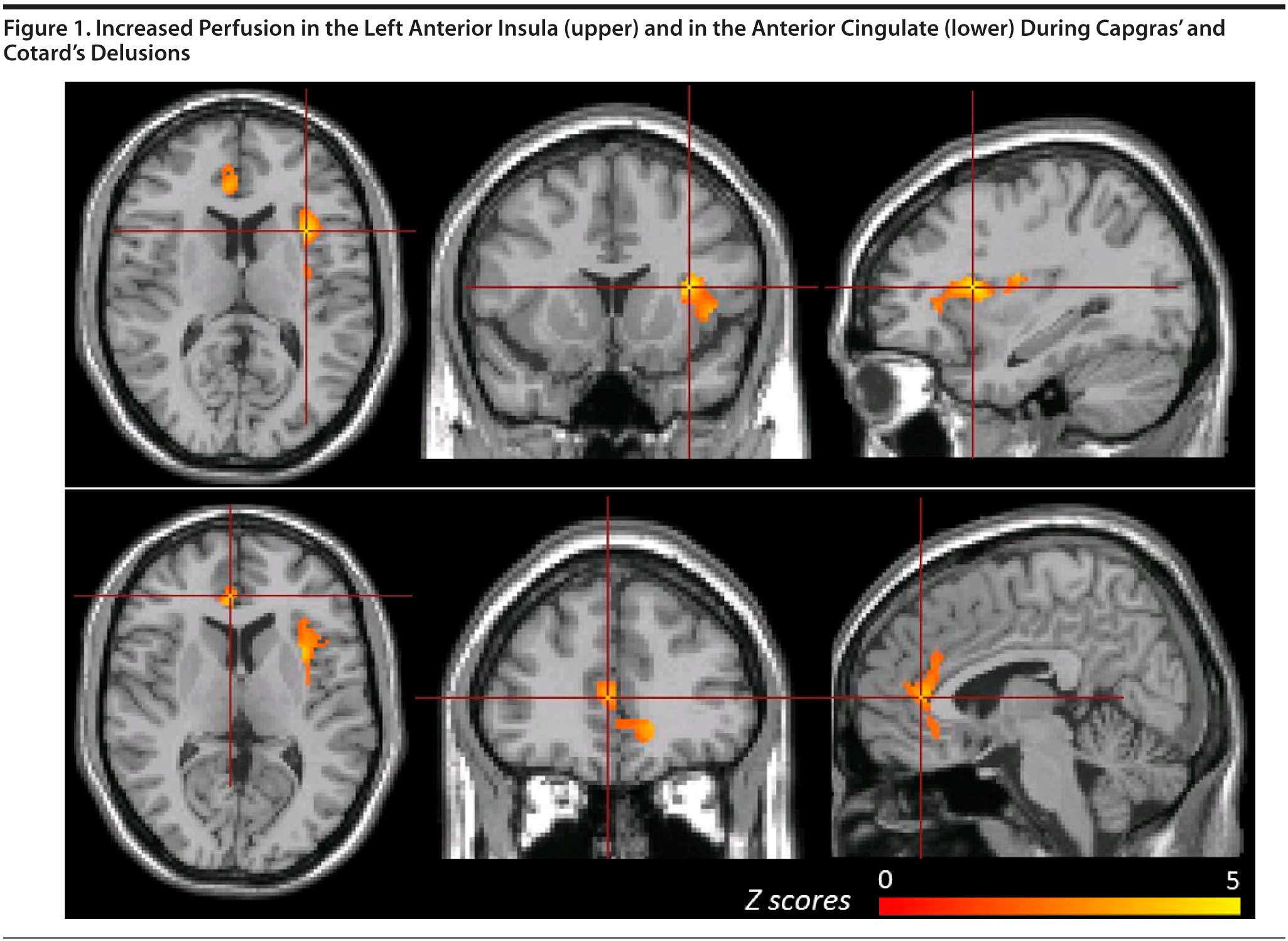 We report the case of a 72-year-old patient who developed a severe depressive episode with melancholic features as well as Capras’ and Cotard’s delusions. This clinical picture was associated with a particular pattern of cerebral activation. Co-occurrence of Capgras’ syndrome and Cotard’s syndrome has been reported in the literature.1 The 2 disorders seem to share similar mechanisms and to arise from a marked external or internal perceptual-affective dissonance, which produces a major feeling of strangeness of the external world and of one’s own body commonly called derealization/depersonalization.2

Cerebral blood flow normalization at 5 weeks of successful antidepressant and antipsychotic treatment suggests that LAI and ACC hyperactivity is probably involved in the pathophysiologic mechanisms of the disease.

Anterior insula is suggested to be a supermodal structure, involved with ACC, in association with affective and perceptual recognition processes.3 Disturbances in anterior insula activity might result in an atmosphere of strangeness in which Cotard’s and Capgras’ delusions seem to emerge.

If we assume that symptom dimensions in depressive disorder reflect dysfunction in specific neuronal circuits, we could speculate that depression with major depersonalization/derealization in Mr A is related to a complex neuronal network in which LAI and ACC seem to play a major role.