Mr A complained of worsening depression coinciding with Dupuytren’s contracture together with loss of appetite, feeling hopeless, insomnia, loss of interest, and low energy of more than 4 weeks’ duration, with no suicidal ideation. Mr A had no other significant mental health issue, and he scored 21 on the Hamilton Depression Rating Scale.4 Mr A also stated that he noticed a cyclical pattern of his depression aggravating his Dupuytren’s contracture symptoms. He stated that once his depression started or relapsed, the Dupuytren’s contracture pain became more intense. He also noticed a significant reduction in pain whenever his depressive symptoms improved. At examination, he had a blunt affect and contracture in both palms, with significant bowstringing in his right hand making it difficult to place the hand flat on a table (Figure 1). Complete blood count and basic metabolic panel tests were normal, although his thyroid-stimulating hormone level was elevated. 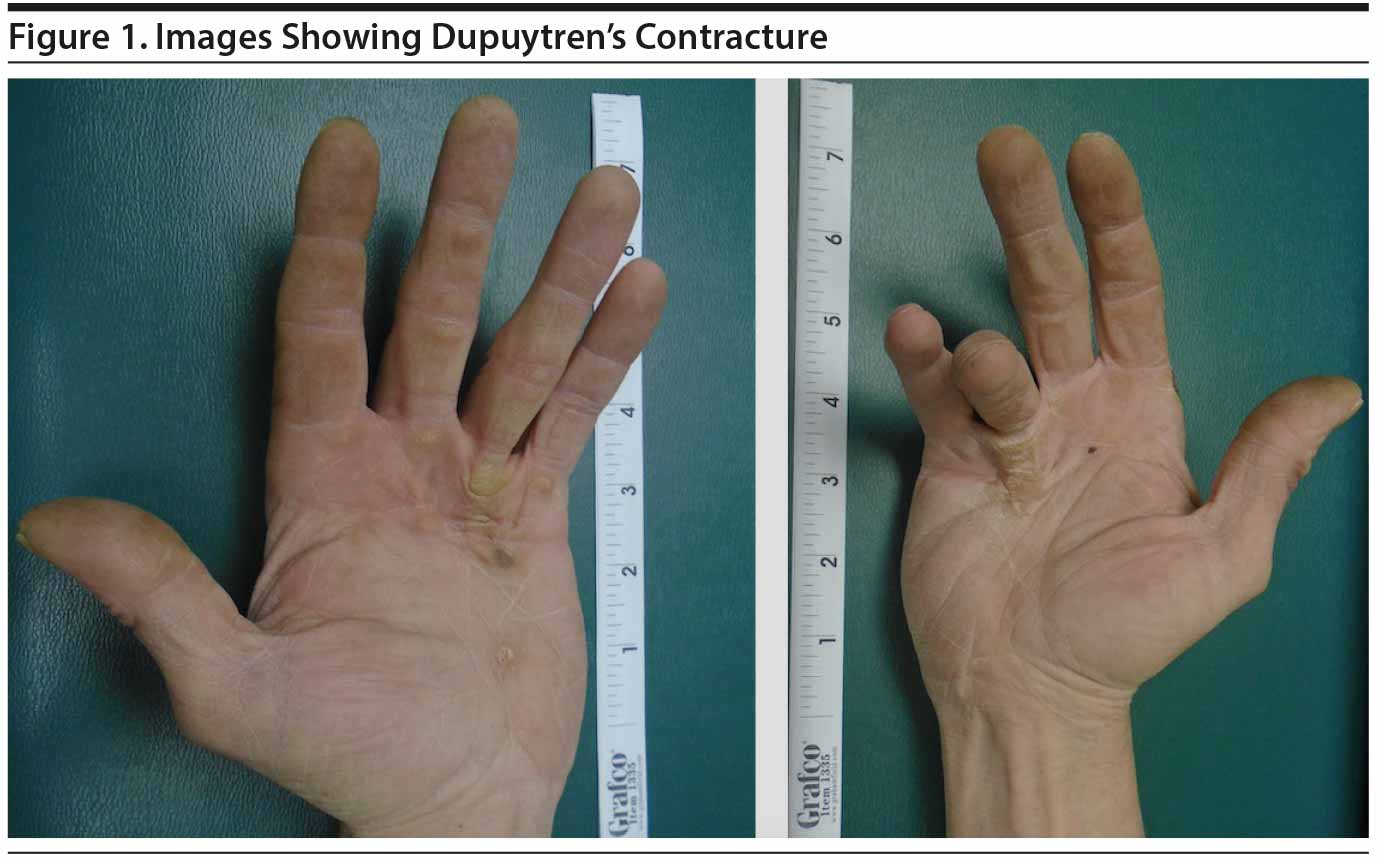 A diagnosis of recurrent major depressive disorder was made (DSM-5 criteria), and he was started on venlafaxine extended release 150 mg/d, along with pain management with morphine controlled release 30 mg every 12 hours. Mr A noted a significant improvement of his symptoms while on this regimen and after 3 months was scheduled for surgical exploration and repair of the hand, which was unsuccessful.

Depression has been linked to dysregulation of the fibroblast, possibly via the mechanism of oxidative stress.3 Worsening of Mr A’s depression coinciding with exacerbation of Dupuytren’s contracture suggests that symptoms of both conditions might be due to similar pathways. Antidepressant doses of venlafaxine have been shown to modulate oxidative stress,5 which might have been the reason for Mr A’s improvement. Venlafaxine has been shown to inhibit glucocorticoid-induced gene transcription in both mouse fibroblasts.6 Mr A’s current history of smoking, previous alcohol use, and repetitive use of his hands might have contributed to the Dupuytren’s contracture since they are modifiable factors; however, he was able to correlate the cyclic worsening of his Dupuytren’s contracture pain with relapse of his depression.

This case highlights the fact that Dupuytren’s contracture with comorbidities such as severe depression could alter the prognosis via complex interactions affecting fibroblast dysregulation and oxidase stress. Further studies are required.