Exacerbation of Depression Symptoms in the Presence of Dermatitis Herpetiformis Rash, Celiac Disease, and Low Cholesterol

Exacerbation of Depression Symptoms in the Presence of Dermatitis Herpetiformis Rash, Celiac Disease, and Low Cholesterol

To the Editor: Dermatitis herpetiformis and celiac disease may be associated with mood disorders in some patients, with suggestions of a link between low levels of cholesterol. Exacerbation of depressive symptoms has been attributed to cholesterol alterations in nerve cell membranes needed to maintain the functional integrity of serotonin receptors.

Case report. Ms A is a 59-year-old white woman who presented with depression, frequent crying, insomnia, loss of concentration, and anhedonia for more than 2 weeks. She scored 22 out of a possible 27 points on the 9-item Patient Health Questionniare.1 Ms A was diagnosed with major depressive disorder recurrent moderate (DSM-5 criteria).2 She was started on sertraline 50 mg/d, which was slowly titrated up to 200 mg/d with improved clinical response. Six months prior, she was diagnosed with celiac disease due to elevated tissue transglutaminase IgA antibodies, antigliadin IgG antibodies, and improvement of symptoms with a gluten-free diet. There was associated painful maculopapular and pruritic rash (Figure 1). Rash and history of celiac disease suggested a diagnosis of dermatitis herpetiformis (ICD-10 criteria), which was confirmed by successful treatment with oral dapsone. Ms A endorsed increased depression during flare-ups of her dermatitis herpetiformis rash. Her lipid panel showed low serum cholesterol of 138 mg/dL during dermatitis herpetiformis rash flare-ups versus 167 mg/dL during remission. She had a depression rating of 6/10 when the rash was absent and a rating of 8/10 during rash exacerbation. 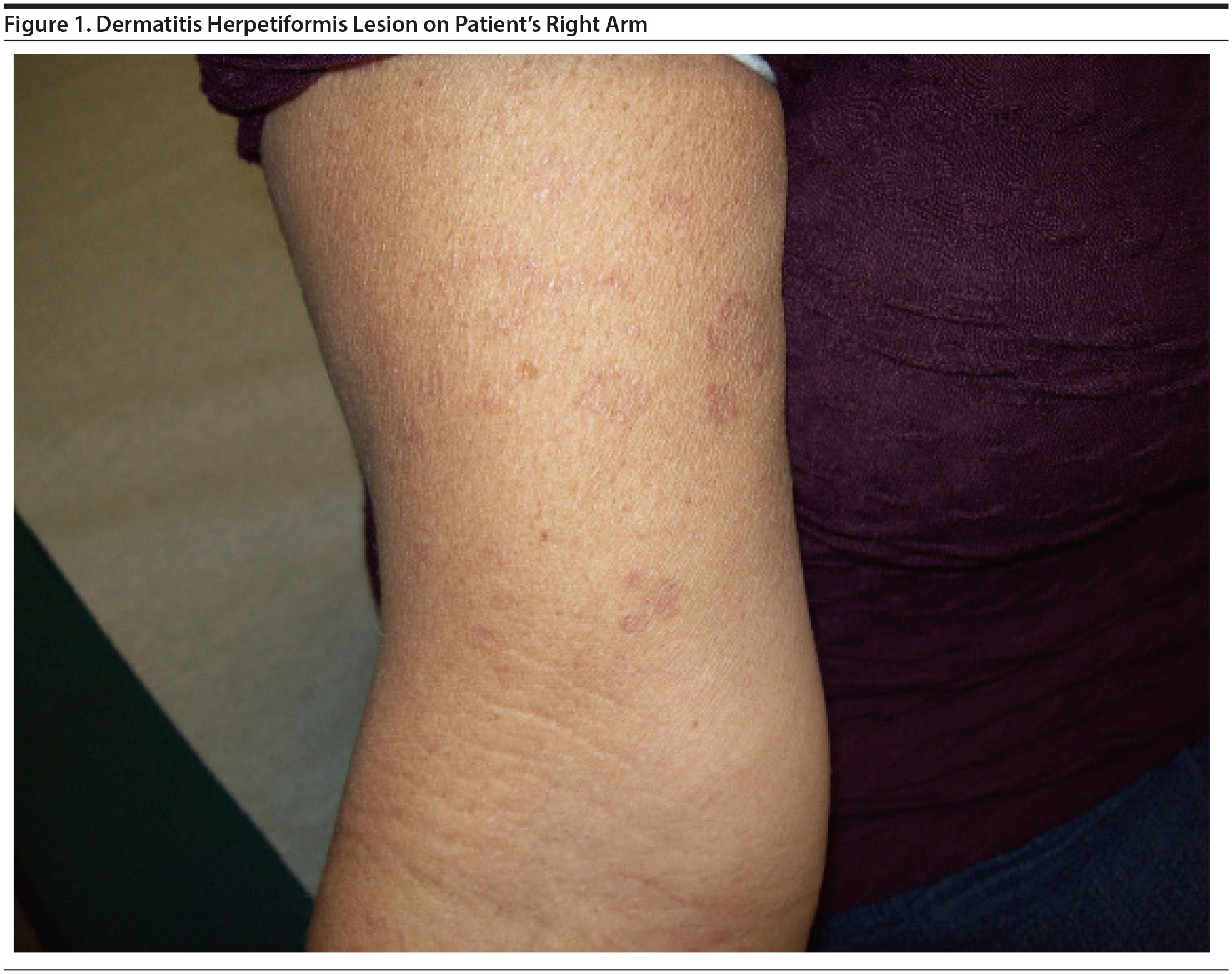 Celiac disease results from a combination of genetic predisposition, environmental factors, and immunologically based inflammation causing malabsorption. It is characterized by presence of antigluten and antitransglutaminase 2 antibodies as was seen in our patient.3,4 There is a female preponderance of celiac disease, and the involvement of the central nervous system produces neurologic or psychiatric manifestations including but not limited to epilepsy, dementia, and depression. However, there is sparse literature documenting celiac disease, depression, low cholesterol, and dermatitis herpetiformis occurring together as seen in our patient.

Studies5 have reported the role of metabolism of biogenic amines in the central nervous system in depression. The neurons synthesize monoamines from precursor amino acids, mainly tyrosine and tryptophan.4 Hernanz and Polanc5 reported a significant reduction in ratio of tryptophan to other large neutral amino acids, which predicts brain tryptophan uptake and serotonin production in patients with celiac disease. The lack of availability of tryptophan in the neurons may account for the reduction of serotonin levels in the central nervous system leading to depression as was seen in our patient.4

Deposition of IgA and epidermal transglutaminase complexes in the papillary dermis has been hypothesized as the possible cause of the lesions of dermatitis herpetiformis, which in turn appears to correlate with the extent of enteropathy.4

The low cholesterol levels in patients with dermatitis herpetiformis such as in our patient have been attributed to inadequate absorption due to intestinal villous atrophy. Some studies6 have linked depression to low levels of brain cholesterol. It might be possible that a low cholesterol level indirectly leads to reduced brain serotonin, reflecting the importance of adequate cholesterol in nerve cell membranes to maintain the functional integrity of serotonin receptors.3

We speculate that the immune dysregulation that presented as celiac disease and dermatitis herpetiformis led to defective nutrient uptake from the gastrointestinal tract, which led to reduction in cholesterol and tryptophan, ultimately leading to the reduction of serotonin levels in the central nervous system.

Further study is required to shed light on the precise pathogenesis of the co-occurrence of dermatitis herpetiformis, celiac disease, low cholesterol, and depression.

Patient consent: Permission was received from the patient to publish this case report, and information has been de-identified to protect anonymity.