Eyelash Loss Secondary to Escitalopram But Not to Sertraline: A Case Report

Eyelash Loss Secondary to Escitalopram But Not to Sertraline: A Case Report

To the Editor: Alopecia is a recognized side effect of selective serotonin reuptake inhibitors (SSRIs).1 To our knowledge, no episodes of eyelash loss related to the use of escitalopram or any SSRI have been recorded before.

Case report. Ms A, a 25-year-old woman, was seen in the ophthalmology clinic after referral by her optometrist. She described 4 months of bilateral upper eyelash loss, with the right side more affected than the left. There were no other symptoms and no history of trichotillomania, and the patient had tried changing her makeup regimen to no avail. She was experiencing some regrowth but found that newly grown eyelashes would simply fall out again.

Ms A had a past medical history of irritable bowel syndrome, anxiety, and mild asthma. She was known to be intolerant of clarithromycin. 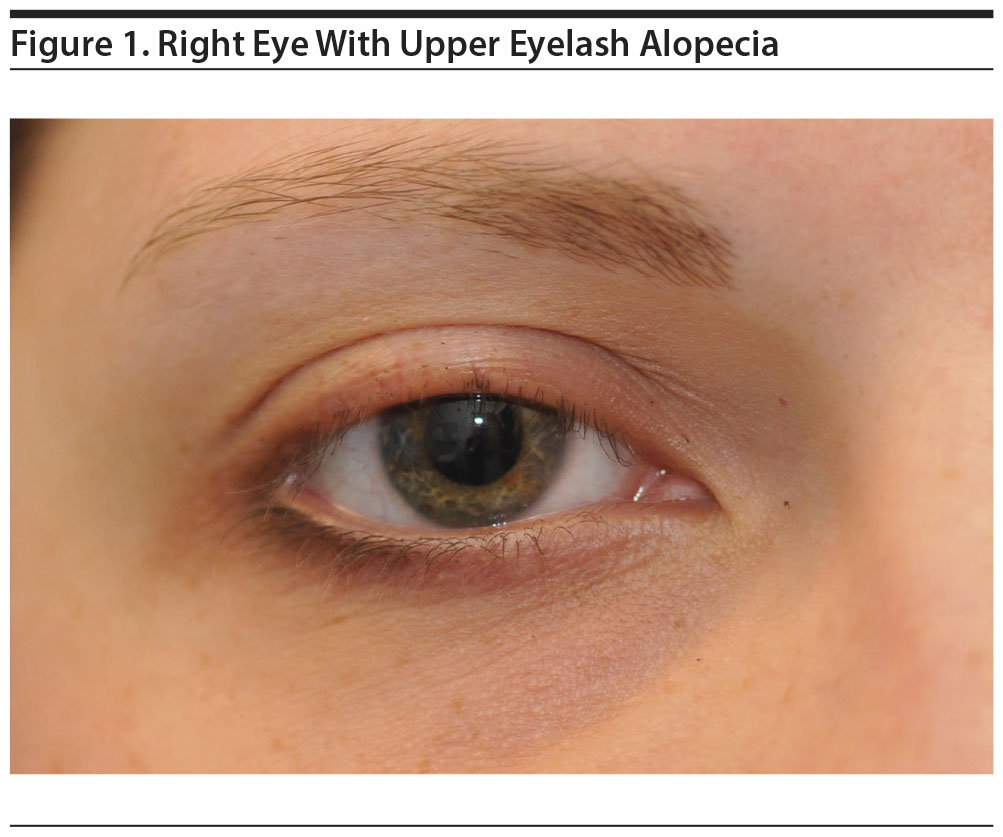 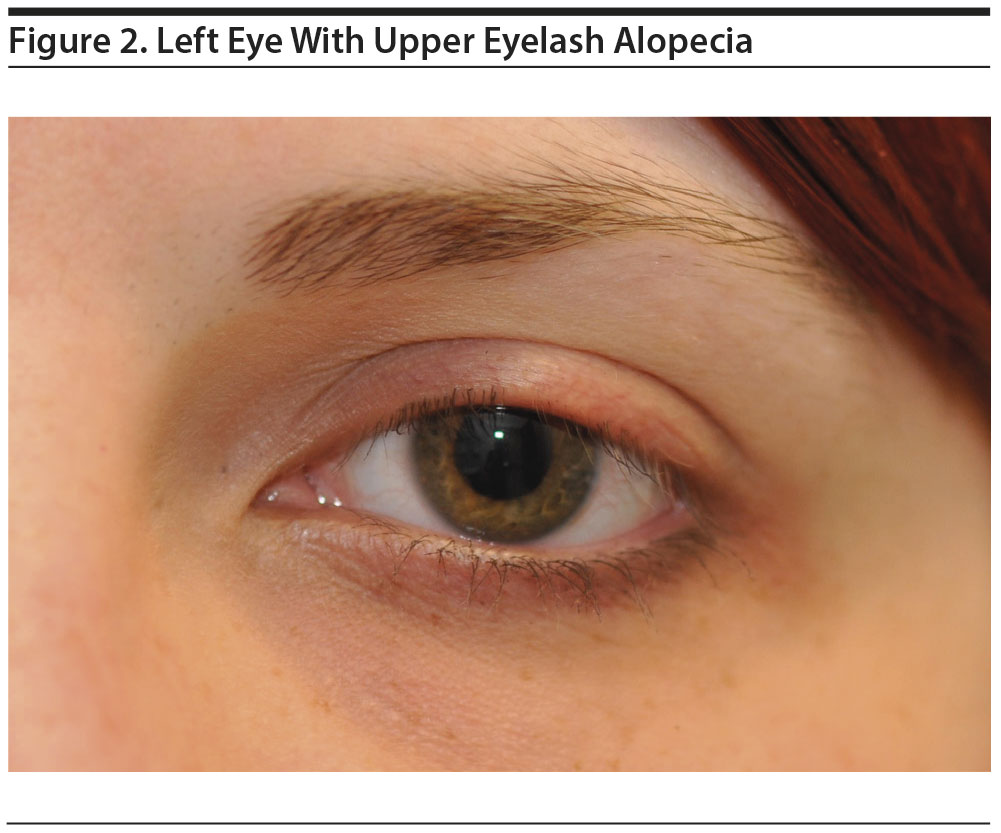 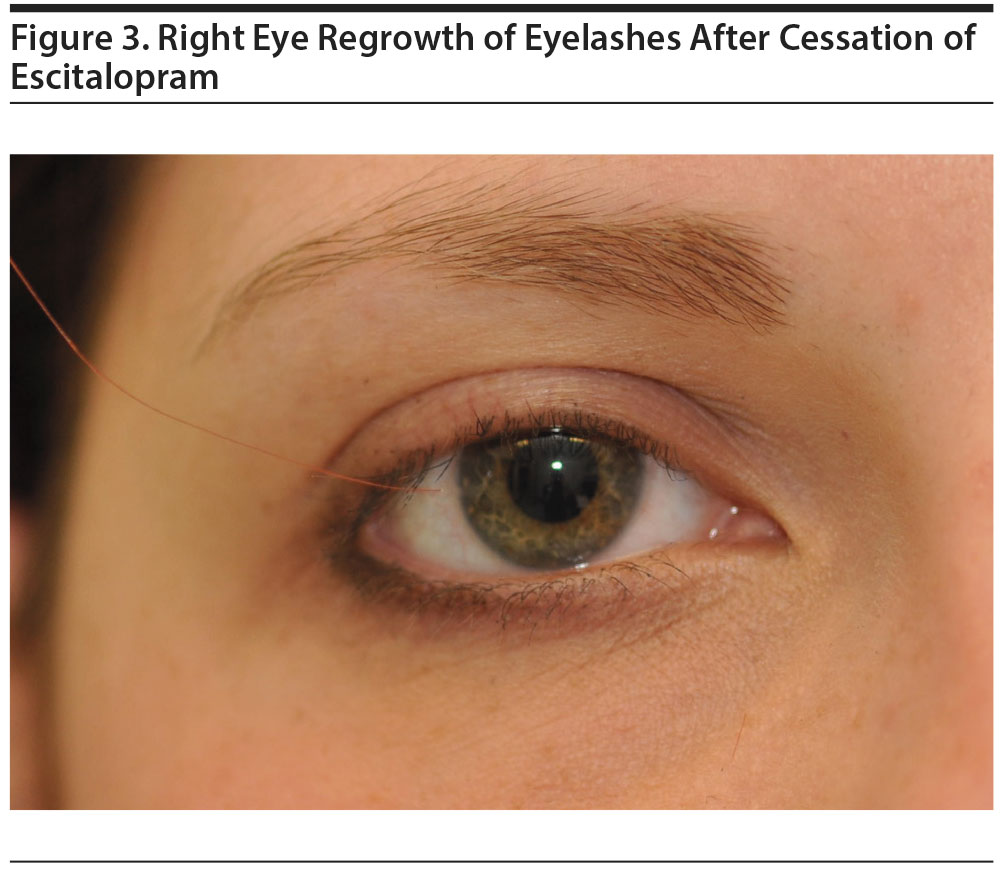 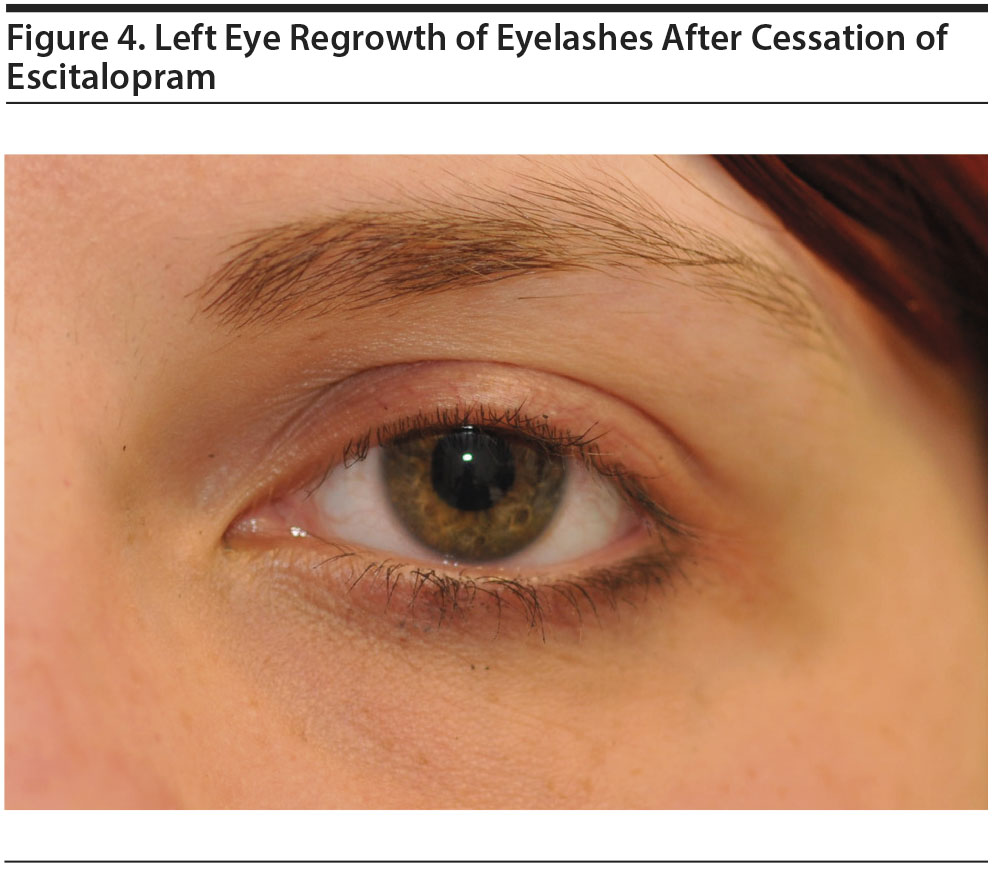 It was noted that Ms A had recently been started on escitalopram for anxiety and low mood, and her symptoms followed the introduction of this drug. Her only other medication was an albuterol inhaler. Ms A first presented to her general medical practitioner with eyelash loss approximately 12 weeks after escitalopram was initiated.

On examination, Ms A had healthy eyelids with no features of infection or blepharitis. Eyelash loss was noted on both upper lids on the central and lateral aspects (Figures 1 and 2), with the right eyelashes more affected than the left. There were no clinical features in keeping with trichotillomania and no eyebrow or scalp hair loss.

After consulting the literature and finding an association between escitalopram and alopecia, we switched Ms A from escitalopram to sertraline. A suspected adverse drug reaction was reported to the British National Formulary.

Ms A was reviewed with repeat photography 5 weeks after cessation of escitalopram. At this time, her eyelashes started to regrow (Figures 3 and 4), with the left side almost back to normal and the right side much improved. At review at 4 months, Ms A’s eyelashes were completely normal, and she was tolerating sertraline well.

In the following months, Ms A was tapered off all antidepressants after successful treatment with cognitive-behavioral therapy for anxiety. In the 18 months since and up until the time of writing this report, there have been no further episodes of eyelash loss.

Eyelashes are important anatomic landmarks for both their structure and cosmetic appearance.2 Milphosis (the selective loss of eyelashes only) has a wide differential diagnosis2 including ophthalmic, dermatologic, and systemic disease. Drugs, including anticoagulants and antithyroid drugs, are a recognized cause of eyelash loss, but SSRIs have not been previously implicated.3 SSRIs are known to cause alopecia.1 This condition is reversible, and the mechanism is not fully understood, but the antimitotic nature of the drugs is thought to play a role.1 Eyelashes have a life cycle of 3-5 months,3 and the timing of this patient’s presentation is in keeping with a drug-induced state of altered hair cycle kinetics.

Escitalopram is known to cause alopecia and has been found to do so when other antidepressants have not had the same effect.4 To our knowledge, this is the first time a case of eyelash loss caused by escitalopram use has been recorded.

Establishing causality between SSRIs and alopecia is not without challenge, but a growing body of evidence appears to demonstrate that the risk of alopecia varies between SSRIs and that women seem to be more affected than men.5 Patients taking escitalopram will perhaps be more sensitive to the consequences of this cosmetically unappealing side effect than those not affected by anxiety and depression, increasing the importance of prompt recognition and cessation of treatment. Doctors should be aware of this side effect of escitalopram and understand that it seems to be reversible and that alternative SSRIs may not have the same effect on the same patient.