To the Editor: The prevalence of neuroleptic malignant syndrome (NMS) is estimated to be 0.9/1,000 people.1 The clinical presentation is heterogeneous, especially in the early phase.2 Although it is historically associated with the typical antipsychotics, it is also a potential adverse effect of atypical antipsychotics.3-5 Differential diagnosis in NMS is complicated by the paradox of coexisting pathologies giving a similar clinical picture.6,7 We present a case report in which psoas abscess was demonstrated as a differential diagnosis of NMS in a schizoaffective disorder patient with catatonic symptoms.

Case report. A 40-year-old woman was admitted to the psychiatric inpatient unit due to a psychotic episode. She had been diagnosed with schizoaffective disorder 20 years before. During her most recent hospitalization, which was 4 months prior, she had improved with a drug combination of lithium 800 mg/d, aripiprazole long-acting injectable 400 mg/monthly, olanzapine 5 mg/d, and clonazepam 1.5 mg/d.

At the beginning of the current hospitalization, physical restraint and olanzapine injectable 10 mg and aripiprazole injectable 7.5 mg were required due to the presence of catatonic symptoms, fluctuant agitation, and difficulties with taking drugs orally. At day 5, treatment with intravenous ceftriaxone 500 mg/d was started because of urinary tract infection (UTI) and the presence of Enterococcus faecalis in the patient’s urine culture. Nevertheless, in the following days the patient’s condition worsened and she developed tachycardia, hypertension, urinary retention, hyperhidrosis, severe agitation, and fever up to 39°C. Blood tests showed discrete elevation of creatine phosphokinase (CPK) (599 U/L), and there were no alterations in biomarkers of sepsis initially. NMS was hypothesized as a diagnosis. She was transferred to the intensive care unit (ICU) because of the hemodynamic instability, and she was intubated and sedated. 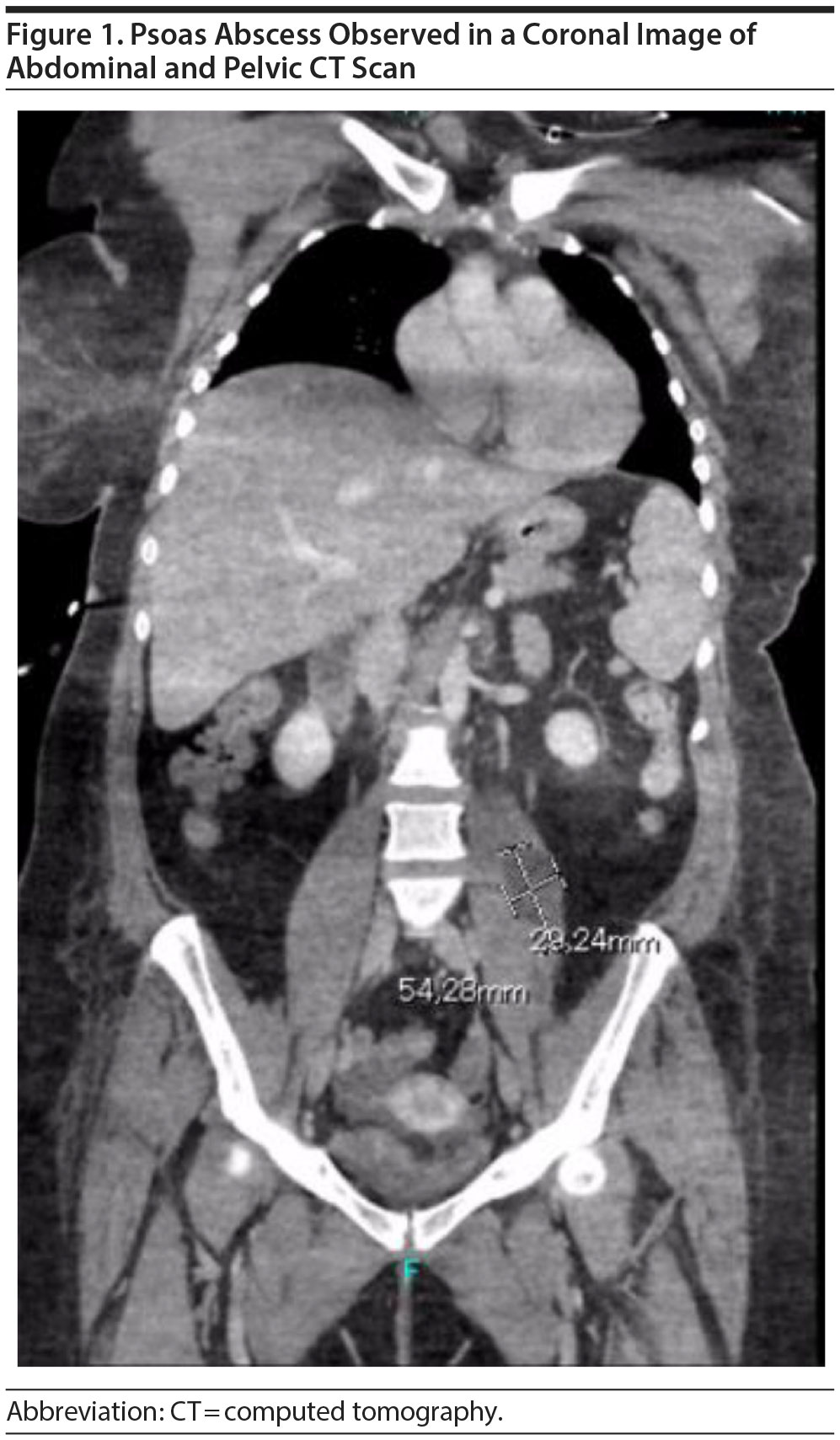 Supplementary tests were implemented in the ICU (brain computed tomography [CT], brain magnetic resonance imaging, chest radiograph, electrocardiogram, electroencephalography, brain-relevant antibodies in serum), but all were inconclusive. Despite the withdrawal of psychotropic drugs, fluctuant fever as well as agitation persisted when withdrawal of sedation was attempted. Electroconvulsive therapy was started, but no marked improvements were observed. At 4 weeks, given the persistence of the fever and the presence of discrete leukocytosis and C-reactive protein in subsequent blood tests, abdominal and pelvic CT scans were performed and a left psoas abscess with a size of 29 × 54 mm was identified (Figure 1). Intravenous antibiotic therapy (meropenem and linezolid) was administered for 4 weeks, and marked clinical improvement occurred; percutaneous abscess drainage was not considered due to the patient’s good response to antibiotics. Concomitantly, clozapine was initiated up to 350 mg/d and lithium was restarted up to 800 mg/d with adequate tolerability and efficacy. No hemodynamic instability was observed after initiation of psychotropic drugs once the psoas abscess was being treated.

Psoas abscess is a rare condition with a reported incidence of 0.4/100,000,8 and there are frequently delays in its diagnosis and effective management. It commonly occurs because of the direct expansion of a nearby infectious/inflammatory process into the psoas muscle. One of the most usual causes is genitourinary; for example, UTI.8 Regarding the clinical presentation, the classic triad of back pain, limp, and fever is present in only 30% of cases, and atypical presentations, such as sepsis, have been described.9

Mild increases in CPK levels are not specific to NMS and could be attributed to intramuscular injections and physical restraints.6 Preexisting catatonia has been shown to be a potent risk factor for the development of NMS,10,11 but the persistence of the fever, even after the cessation of psychotropic drug treatment, suggested the examination of other etiologies as an alternative diagnosis in our patient. UTI was observed at the beginning of the hospitalization and could have been the origin of the psoas abscess. The overlapping of the psychiatric symptoms exhibited by our patient, especially catatonic symptoms, could have masked the psoas abscess symptomatology.

Taking into consideration the symptom progression, and our patient’s recovery after the psoas abscess was treated, we suggest this condition as a principal cause of the clinical worsening observed. However, factors as catatonic symptoms or some biological markers, such as elevation of CPK and no alteration in biomarkers of sepsis initially, may have influenced the incorrect diagnosis of NMS.

To our knowledge, this is the first case report in which psoas abscess appeared as a differential diagnosis of NMS. We recommend having a high index of clinical suspicion of this rare condition and implementing supplementary tests that can avoid delayed diagnosis and adequate treatment.

Disclaimer: All authors reviewed and approved the manuscript before submission and accepted responsibility for the information contained in the submission.

Patient consent: Permission was received from the patient and her familial caregiver (mother), and information has been anonymized to maintain confidentiality.