To the Editor: Limbic encephalitis may have various causes and be associated with a number of neuropsychiatric disorders.1 Our knowledge of viral etiology, including herpes simplex virus, is quite advanced, but in autoimmune cases, our knowledge is still limited.2

Case report. A 72-year-old man was admitted to our outpatient clinic for sudden-onset amnesia and confusion that had lasted for more than 2 weeks. The symptoms manifested 15 days previously as a result of a psychologically stressful situation, and he was unable to find his way home. According to relatives, he had been staring at a fixed point for 2 minutes at a time and had a conversation with his deceased mother. These episodes were repeated several times during the same day. His medical history included mild heart failure and benign prostatic hyperplasia. He had been treated with indapamide, acetylsalicylic acid, and alfuzosin for hypertension and benign prostate hypertrophy.

During the neurologic examination, his personal and place orientation were found to be normal despite temporal disorientation. His speech included word perseverations. His standardized Mini-Mental State Examination (MMSE)3 score was 21/30 (2 points lost for orientation, 3 for attention and calculation, 2 for recall, and 2 for language).

Perseverations in Luria alternating motor sequences and clock drawing tests and planning errors were also present, suggesting executive dysfunction and mild cognitive impairment. Results of the examination of pyramidal, extrapyramidal, cerebellar, and sensory systems were found to be within normal limits. 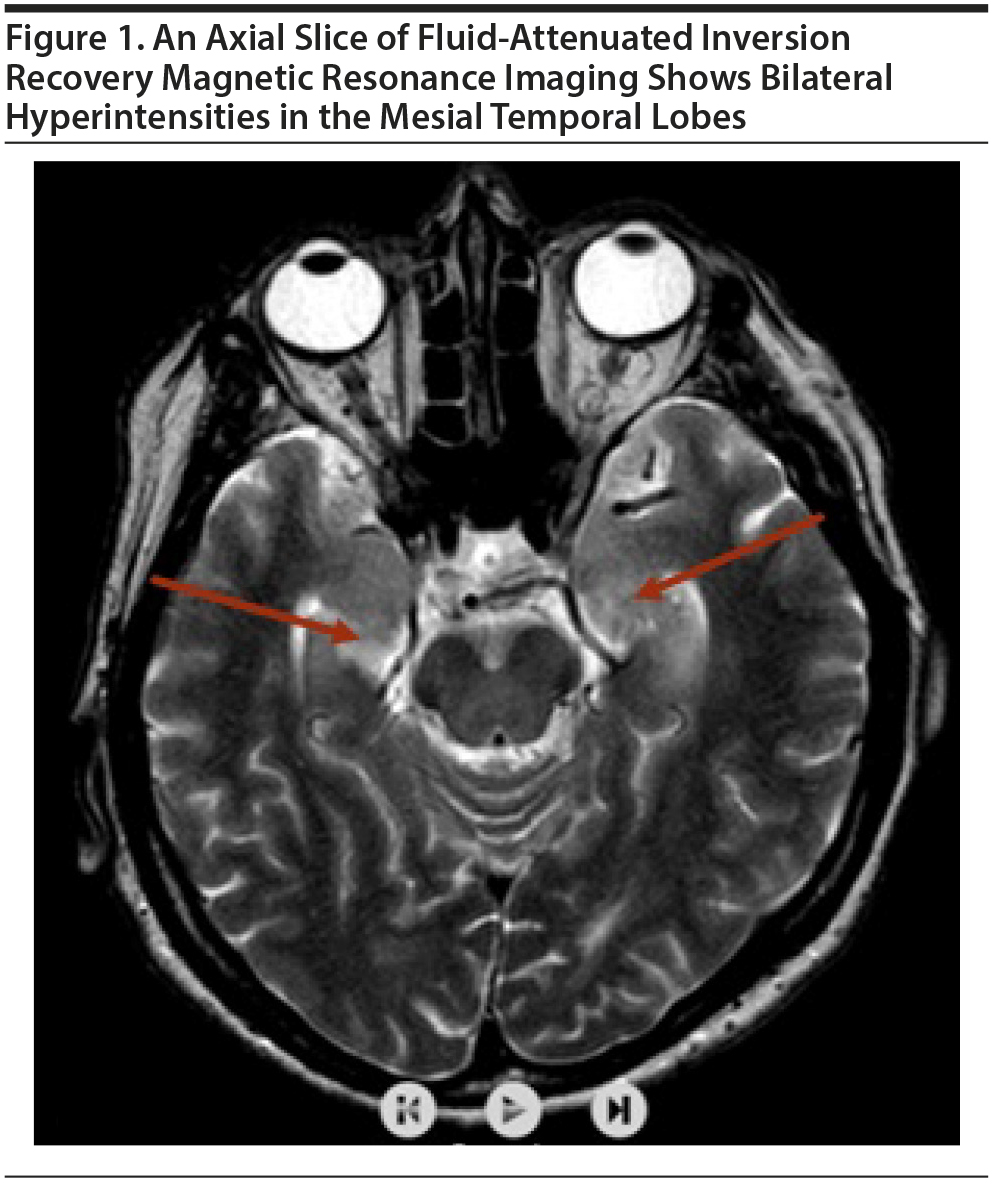 The patient was given intravenous prednisolone 1,000 mg/d for 5 days followed by oral prednisolone at a dose of 16 mg per/d. In addition, valproic acid 1,000 mg/d was started orally. The limbic encephalitis antibody panel of plasma and CSF showed leucine-rich glioma inactivated 1 (LGI1) positivity. Abdomen and thorax computed tomography (CT) scans were performed. A round mass lesion was found in the retrosternal area on the thorax CT scan. Examination results of acetylcholine receptor antibodies and muscle-specific tyrosine kinase in peripheral blood were negative. An anterior thoracotomy was performed, and the mediastinal mass was removed. The pathological examination showed type B2 thymoma (cortical thymoma).

Our final diagnosis established anti-LGI1 limbic encephalitis related to thymoma according to the 2018 ICD-10-CM diagnosis code G04.81 (other encephalitis-limbic). Oral prednisolone was discontinued because a second brain MRI showed regression in lesions 6 weeks after surgery. At the 6-month follow-up visit, the patient showed none of the previous symptoms and was given no immune treatment. His MMSE score had improved to 25/30 (2 points lost for attention and calculation, 1 for recall, and 2 for language). His score improved due to better orientation and recall. Valproic acid was prescribed to be used for at least 1 year.

LGI1 is a secreted synaptic protein that organizes α-amino-3-hydroxy-5-methyl-4-isoxazolepropionic acid receptors of glutamate.4 LGI1 antibodies are associated with thymoma in a ratio < 5% and even less with other cancers. Anti-LGI1 limbic encephalitis can cause memory dysfunction and seizures. In this disorder, the most affected brain area is the medial temporal lobe. In addition, hyponatremia is common in these cases.5

Thymomas are commonly associated with myasthenia gravis.6 However, this case highlights that thymomas may also be related to limbic encephalitis.

Patient consent: Consent was obtained from the patient and his legal guardian to publish the case report, and information was de-identified to protect anonymity.

Pharmacist-led dementia care rounds are an efficient way to correct sleep medication use a...

An Update on the Future of Wilson Disease Management

Due to Wilson disease myriad manifestations, its rarity, and its range of symptoms, differ...

This easy-to-use scale developed by 7 experts measures the impact of TD on patients’ dai...

Letter to the Editor