Stroke, Epilepsy, and Antiepileptic Drugs as the Etiology of Major Depressive Disorder: A Case Report and Review

Stroke, Epilepsy, and Antiepileptic Drugs as the Etiology of Major Depressive Disorder:

A Case Report and Review

Lateralized periodic discharges (LPDs) are a rare type of epileptiform activity. The authors of this brief report describe the association of LPDs with acute catastrophic depression in a previously healthy patient who had a series of neurobiological insults caused by a stroke and its treatment that led to the development of significant psychopathology. Through this case of new and debilitating depression that followed a recent stroke, subsequent development of LPDs, and treatment with levetiracetam, the authors highlight the complex interplay of structural, electrophysiologic, and pharmacologic factors in the pathogenesis of poststroke depression and the crucial role of having a broad biopsychosocial assessment for optimal diagnosis and management.

The association between depression and neurologic disease is well established. A stroke can cause a series of neurobiological disturbances that may predispose a patient to psychopathology. Approximately 31% of patients who experience a stroke also experience depression in the first 1-6 months following the event.1 A cerebral infarct can also serve as a nidus for epileptiform activity, which may independently contribute to depressive symptoms. In 1 study,2 23.1% of patients with epilepsy were found to have active comorbid depression. One rare type of epileptiform activity, lateralized periodic discharges (LPDs), has previously been associated with acute catastrophic depression.3 Unfortunately, attempts to treat epilepsy can also precipitate psychiatric disturbances, since certain antiepileptic drugs have been strongly associated with mood side effects.4

We present an unusual case of severe depression that developed as a result of the aforementioned series of neurologic insults. Our patient experienced new and debilitating depression most likely attributable to a recent stroke, subsequent development of LPDs, and treatment with levetiracetam. This case highlights the complex interplay of structural, electrophysiologic, and pharmacologic factors in the pathogenesis of poststroke depression.

A 77-year-old woman with a past history of right occipital lobe stroke 5 years earlier presented to our center with acute onset of dysphagia, slurred speech, and a left facial droop and was found to have a small right frontal lobe infarct near the motor strip. The deficits had mostly resolved by the time she was seen in neurologic follow-up 3 months later. Then, 4 months after her right frontal stroke, she presented with acute-onset flushing, lightheadedness, and right-sided headache. Magnetic resonance imaging (MRI) revealed an acute infarct involving the right frontal, parietal, and temporal lobes. At the time of discharge, the only deficits noted were a mild sensory ataxia on the left hand and graphesthesia on the left more than the right hand. Weeks after hospitalization for her third stroke, she developed a significantly depressed mood, sleep disturbance, anhedonia, anergia, concentration deficit, poor appetite, and severe anxiety. She was diagnosed with depressive disorder due to another medical condition (stroke) (DSM-5 criteria). Given her prominent sleep and appetite disturbances, her community psychiatrist treated her with mirtazapine with no significant improvement.

One month following her diagnosis of depression, the patient was hospitalized for acute mental status changes. She was found in her home appearing confused, slowed, and perseverative about her fear of dying. Medical workup was unremarkable except for an MRI that demonstrated known prior infarcts and an electroencephalogram (EEG) that demonstrated LPDs (Figures 1 and 2). She was subsequently started on levetiracetam. She was also started on sertraline and connected with elder home health services. However, after discharge, her anxiety and depression became increasingly severe and debilitating. She developed difficulties in various domains of daily life. She was unable to consume regular meals and lost nearly 30 lb over several weeks. She had significant avolition and difficulties with medication compliance. She also developed a debilitating fear of injuring herself while showering, leading to deficits in personal hygiene. She developed significant concentration difficulties and described sitting in front of her television for hours unable to focus on its content. She became isolative and withdrew from all of her usual social activities, noting that this was because of a new inability to converse with others due to difficulty expressing her thoughts in words. These issues were accompanied by prominent feelings of guilt and hopelessness, and she described her depression as a "heavy load." As several of those features are also present in catatonic and organic syndromes, she was followed by our consultation-liaison psychiatrist who excluded that possibility through clinical evaluation and review of her creatinine kinase levels. 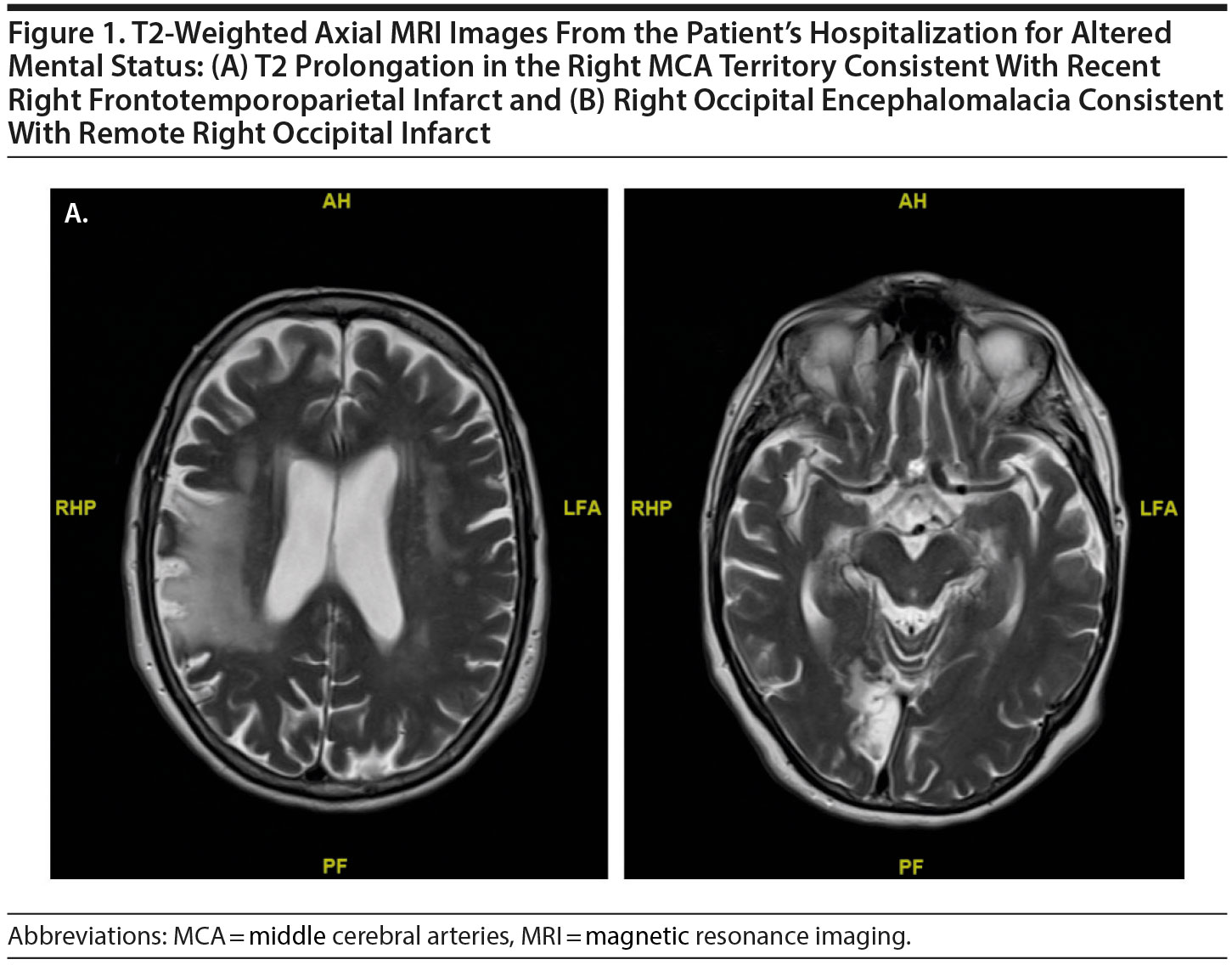 Due to her inability to carry out her activities of daily living, the patient was admitted to our inpatient psychiatric unit. Her most recent symptom scale scores included a 7-item Generalized Anxiety Disorder Scale5 (GAD-7) score of 17 and a 9-item Patient Health Questionnaire (PHQ-9) score of 20, suggesting severe anxiety and depression.6 She exhibited profound avolition, abulia, intense fears, and catastrophic thinking and repeatedly asked for reassurance due to fears that her mood would never improve.

Her depression and anxiety symptoms were minimally responsive to trials of mirtazapine monotherapy, sertraline monotherapy, and various combinations of mirtazapine, venlafaxine, fluvoxamine, and olanzapine. While modifying the patient’s antidepressant therapy, a lamotrigine-levetiracetam cross-taper was concurrently initiated due to concern that her levetiracetam may have been exacerbating her mood symptoms. Given poor response to treatment 2 weeks into her hospitalization, carbamazepine was considered as an alternate antiepileptic agent due to the lack of need for a prolonged uptitration, its mood-stabilizing properties, and previous reports7-9 of effectiveness in treating LPDs. The patient’s levetiracetam 500-mg twice-daily dose was substituted for carbamazepine 200 mg twice daily. Lamotrigine was discontinued. No other changes to her psychotropic regimen were made. At the time of these antiepileptic changes, the patient was being treated with fluvoxamine, mirtazapine, and olanzapine, which were continued. Over the next several days, the patient endorsed improvement in her mood, resolution of tremulousness associated with her anxiety, and resolution of her most prominent neurovegetative symptoms (ie, sleep and appetite disturbance). These perceived improvements translated to substantial reductions in her symptom scale scores. At discharge, her GAD-7 score was 6 and her PHQ-9 score was 8. 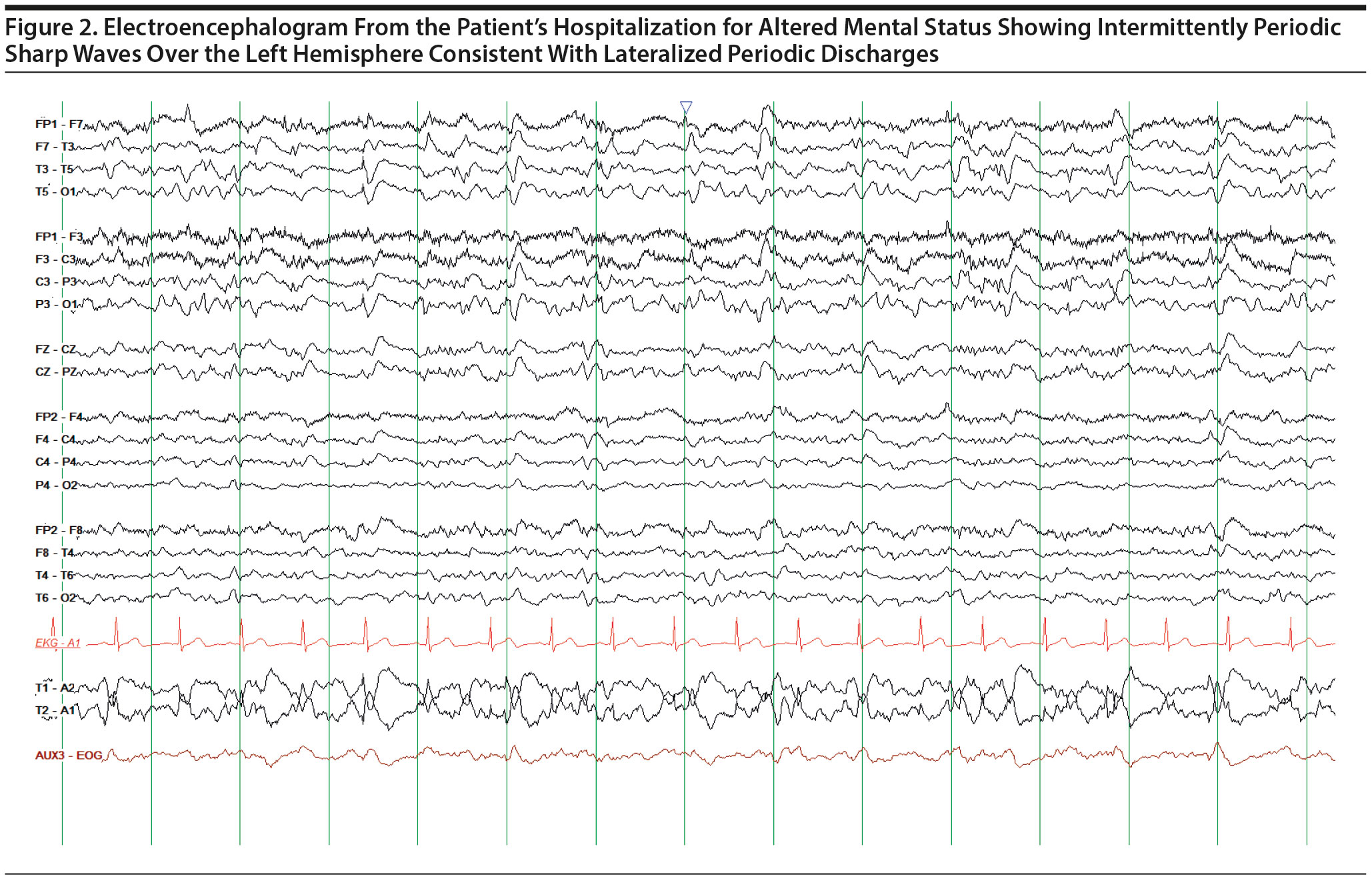 Given our patient’s history of multiple neurologic insults, the cause of her depression was most likely multifactorial. Here, we examine the biological basis of this patient’s depression and discuss the relative contributions of her prior strokes, new epileptiform activity, and treatment with levetiracetam.

The patient’s history of prior strokes places her at higher risk of developing depression. The cumulative incidence of depression in the first 5 years after a stroke is between 39% and 52%.1 Stroke severity and extent of functional impairment are among the strongest risk factors for poststroke depression.1,10 However, for patients such as ours in whom there is little to no neurologic deficit following the stroke, a direct impact of the infarct on the neural circuitry of mood must be considered. Several neurobiological perturbations have been implicated in the pathogenesis of poststroke depression. These mechanisms include alterations to monoamine systems, hypothalamic-pituitary-adrenal (HPA) axis dysregulation, alterations in neuroplasticity, and increases in proinflammatory cytokines.11 Lesion location may also play a role, and most research implicates left hemisphere strokes as a precipitant of poststroke depression, particularly when the frontal lobe is involved; however, with right hemisphere strokes, depression may be more severe with posterior lesions.12 Several large-scale reviews13-15 have shown conflicting findings with regard to the association between lesion location and stroke, and the issue remains controversial. Recently, use of lesion network mapping has shown that lesions associated with depression may be functionally linked to a specific brain circuit centered in the left frontal lobe, even when the lesions themselves do not overlap with this region.16

LPDs, previously referred to as "periodic lateralized epileptiform discharges," are an EEG phenomenon characterized by periodic complexes composed of spikes, sharp waves, or more complex wave forms.17 According to reports from multiple centers,18 LPDs have been detected in 0.4%-1% of EEGs. Almost any cerebral pathology can give rise to LPDs.19 However, cerebral infarction is the most common precipitant, and in 1 study,20 35% of patients with LPDs had previously been diagnosed with a stroke. The etiology of LPDs is thought to be related to changes in cerebral blood flow and metabolism in the setting of an acute neurologic process.21

While LPDs are most commonly seen in the setting of acute brain injury and following seizures, symptoms are generally not attributed directly to LPDs unless they occur over motor cortex, in which case muscle twitches may be seen synchronously with the discharges.21 However, research3 has demonstrated that LPDs can also present with focal neurologic deficits referred to as negative ictal phenomena that resolve with the abolition of LPDs. Meador and Moser3 were first to report a series of patients with LPD-associated negative symptoms including neglect, apraxia, aphasia, amnesia, homonymous hemianopsia, hemiparesis, and depression. Notably, they reported a case of LPD-associated catastrophic depression and described a dramatic disappearance of the patient’s mood symptoms after the abnormal discharges resolved with lorazepam.

The pathogenesis of depression associated with LPDs is not completely understood. Many of the same neurobiological disturbances implicated in the development of poststroke depression have been associated with epileptogenesis in animal models.22 These disturbances include alterations in serotonin levels, HPA axis abnormalities, and induction of neuroinflammatory signaling.22

No contemporary trials comparing pharmacologic treatment options for LPDs have been conducted, but a number of cases have been reported in which LPD-associated seizures were successfully treated with carbamazepine.7-9,23 Lorazepam, felbamate, and pentobarbital have also been used with good response.3,24,25 While carbamazepine may have stopped our patient’s LPDs leading to resolution of depression, this is difficult to confirm, as no follow-up EEGs were performed throughout the course of the patient’s depression. An alternative possibility is that resolution of depression was related to the mood-stabilizing properties of carbamazepine in combination with the removal of levetiracetam.

In this case report, we discuss a patient who presented with depression following a series of neurologic insults including stroke, new epileptiform activity, and treatment with levetiracetam. This case demonstrates how poststroke depression may be exacerbated by neurologic disturbances (eg, epileptiform activity) that develop secondary to cerebral infarcts. It also highlights the entity of LPD-associated depression, an etiology that can be considered in the differential diagnosis of a new mood disturbance associated with epileptiform activity. Finally, this case emphasizes the importance of considering psychiatric history when choosing an antiepileptic drug.

Patient consent: The patient provided consent to have her case published, and information has been de-identified to protect anonymity.

Ekbom syndrome, or delusional parasitosis, is a rare disorder in which patients believe th...

In this report, the authors provide important insights on how to prevent, control, and mit...

Mild Cognitive Impairment, Dementia, and the Evaluation of Patients Who Present With a Concern About Cognitive Decline

In this article, the authors present the case of a patient with concerns about cognitive d...