Catatonia as a Manifestation of Cerebral Venous Sinus Thrombosis

Catatonia as a Manifestation of Cerebral Venous Sinus Thrombosis

To the Editor: We report the case of a patient with a history of systemic lupus erythematosus, antiphospholipid syndrome, and deep vein thrombosis who presented with catatonia secondary to cerebral venous sinus thrombosis (CVST). There is only one prior case report documenting the association of catatonia with CVST. Gangadhar et al1 presented the case of an 18-year-old woman who had initial improvement in her catatonic symptoms with electroconvulsive therapy (ECT). However, the case had a fatal outcome due to cerebral edema and uncal herniation; autopsy results revealed a diagnosis of CVST.1 Given that CVST may be an underlying cause of catatonia, it may be prudent to consider imaging techniques such as magnetic resonance imaging (MRI) and computed tomographic (CT) venography/magnetic resonance venography to rule out CVST in patients at high risk for thrombosis before starting ECT. Our patient had a favorable outcome most likely due to significant improvement in catatonic symptoms with anticoagulation treatment alone.

Case report. Ms A is a 37-year-old white woman with a past medical history of systemic lupus erythematosus, panic disorder with agoraphobia, major depressive disorder, fibromyalgia, antiphospholipid antibody syndrome, hypovitaminosis D, migraines, and prior lower extremity deep vein thrombosis. She presented to the hospital with subacute onset of symptoms including confusion, new-onset headaches, and new-onset hypertension (144/96 mm Hg) for a period of 6 weeks. She needed 24-hour supervision due to her progressively worsening confusion after crashing her car into an electric pole. She was found disoriented in her neighbor’s house prior to admission to the hospital.

The psychiatry department was consulted, and during the mental status examination, Ms A demonstrated reduced facial expression, lack of spontaneous speech, mild cogwheel rigidity in upper extremities, and echopraxia as she mimicked the examiner’s hand movements and body motions. She denied current mood or psychotic symptoms. She endorsed an episode of severe depression following a diagnosis of systemic lupus erythematosus several years earlier; however, she denied prior inpatient psychiatric admissions or past suicide attempts. She had limited insight and judgment. She denied active suicidal or homicidal ideations.

Ms A’s differential diagnosis for catatonia included lupus cerebritis, benzodiazepine withdrawal, delirium, neuroleptic malignant syndrome, posterior reversible encephalopathy syndrome, and CVST. A CT venogram confirmed an occlusion of the left transverse and sigmoid sinus as well as a nonocclusive thrombus in the right transverse sinus (Figure 1). A heparin infusion was initiated, and significant improvement in confusion and catatonia was seen within 24 hours. 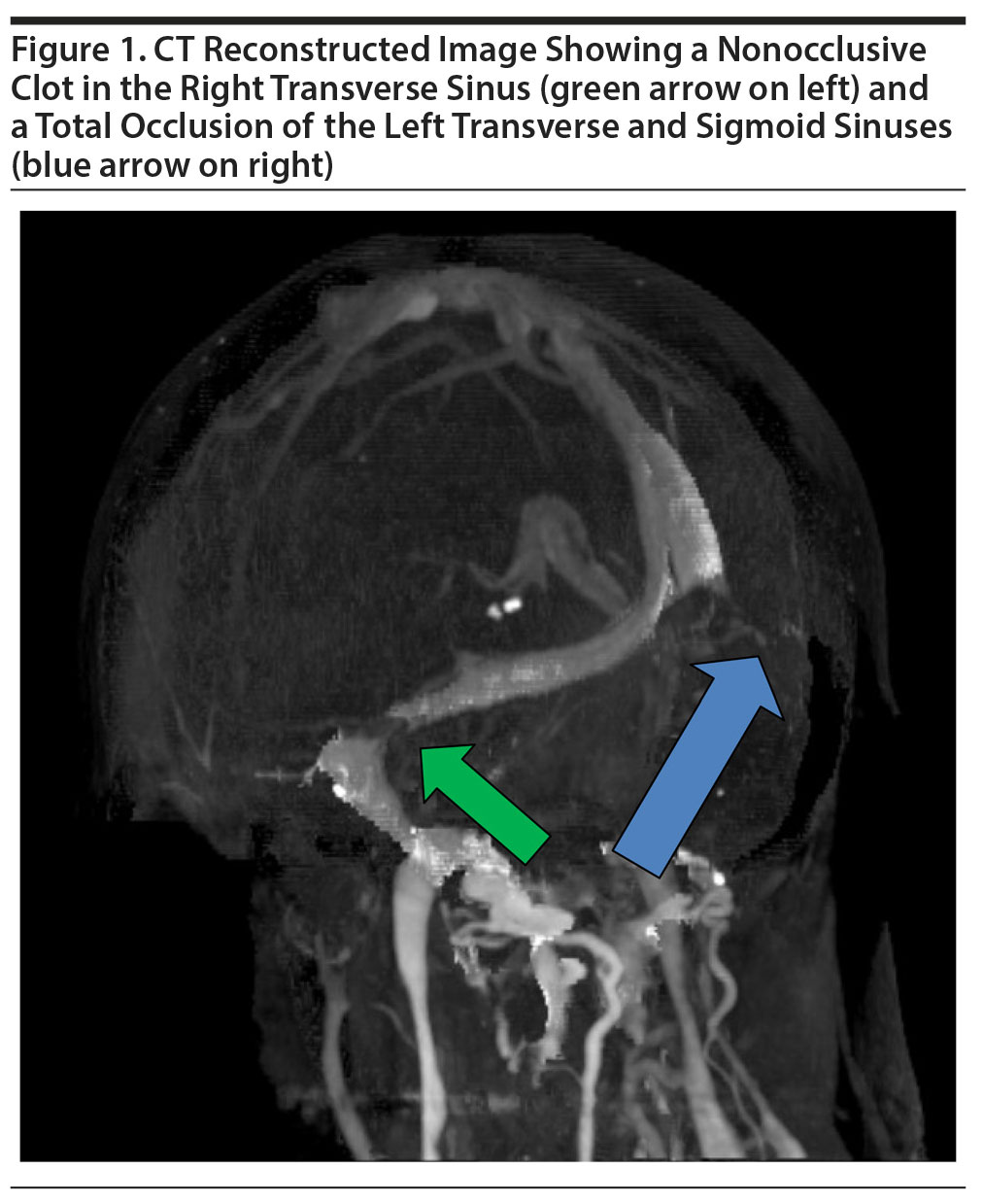 Ms A’s catatonic symptoms were most likely due to CVST given the negative workup for systemic lupus erythematosus exacerbation, lack of significant mood or psychotic symptoms, and subacute onset of confusion prior to stopping benzodiazepines along with neuroimaging evidence for CVST and complete recovery of catatonia following initiation of anticoagulation treatment. An increase in blood pressure and confusion was present, but she showed no other signs of neuroleptic malignant syndrome, specifically hyperthermia and autonomic instability. Thus, a creatine kinase level was not obtained given that CVST was quickly confirmed after initial diagnostic workup.

Given that CVST may be a rare underlying cause of catatonia, it is prudent to consider neuroimaging techniques such as CT venogram to rule out CVST in patients at high risk for thrombosis.

Previous presentation: This case was presented as a poster at the Annual Meeting of the Academy of Psychosomatic Medicine; November 9-12, 2016; Austin, Texas.

Patient consent: Permission was received from the patient to publish this case, and information has been de-identified.