Auditory Hallucinations or Tinnitus? A Case of Framing Effects and a High Jugular Bulb

Auditory Hallucinations or Tinnitus? A Case of Framing Effects and a High Jugular Bulb

To the Editor: Framing effects have an influence on medical decision-making; these effects stem from heuristics that physicians commonly use to diagnose patients.1 The framing itself may be created by the patient’s past medical history, family history, or specific associated symptom as examples. However, the bias created by framing can also lead to missed diagnoses.2,3 For example, tinnitus can occur in patients with a high jugular bulb,4,5 but if the clinical picture is framed with a history of psychosis, there is potential for bias toward labeling the subjective auditory symptom as a hallucination. The following case emphasizes this specific bias.

Case report. Mr A, a 56-year-old Hispanic, undomiciled, unemployed man, presented to the emergency department for chest pain and what seemed to be atypical tinnitus in his right ear. His past medical history included hypoacusia in the left ear due to meningitis during childhood, as well as hepatitis C, hypertension, depression, schizoaffective disorder, and polysubstance abuse. He had been attempting detoxification for both opiate and alcohol abuse, although these attempts were never successful as he claimed to have used both substances shortly before presenting to the hospital. He came to the emergency department complaining of chest tightness that was occurring for 1 week. However, he simultaneously complained of a very loud "ringing, beeping, and whistling" noise in his right ear. This noise was associated with headaches and agitation. He complained at the time of feeling depressed and having suicidal ideation, with the noise playing a significant role in his mood.

He was admitted to the medical floor initially to rule out an acute coronary syndrome. No laboratory abnormalities were noted at admission. After his chest pain was determined to be etiologically musculoskeletal, the psychiatry department was consulted for his depressive symptoms, and the otolaryngology (ENT) department was consulted for his auditory symptoms. The patient was eventually transferred to the psychiatry department because of his suicidal ideations. His diagnosis was noted to be schizophrenia (DSM-5 criteria) due to his constricted affect, poor insight and judgment, and poor reliability and impulse control and potentially due to his previous diagnoses and his auditory symptoms. His medications were reconciled, and he was started again on quetiapine, trazodone, lipitor, amlodipine, and aspirin. 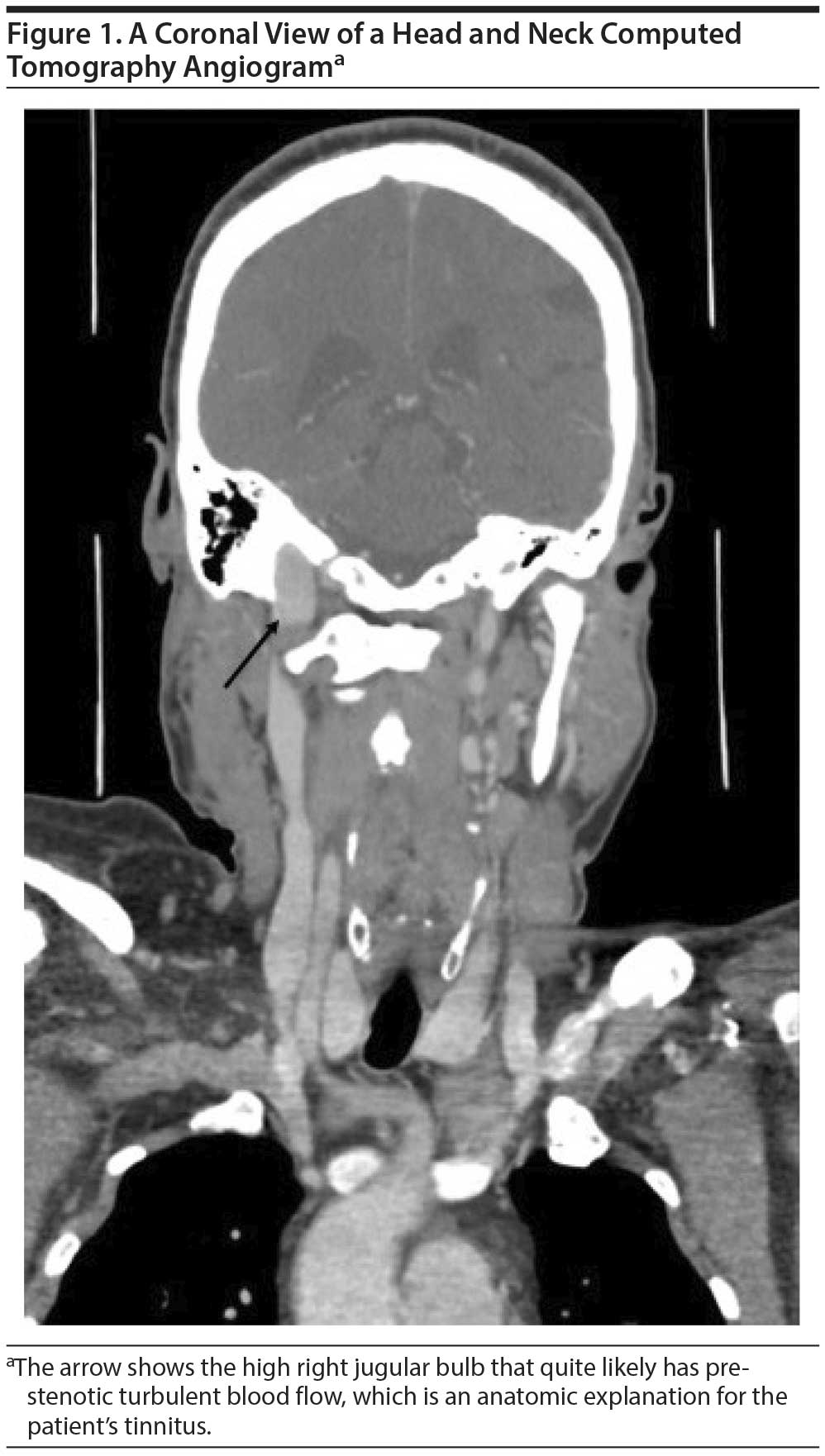 The ENT consult discovered no significant clinical findings; the patient also disclosed no associated symptoms besides headache, agitation, and depression. A computed tomography (CT) angiogram was done to further investigate potential etiologies. The imaging showed a high right jugular bulb (Figure 1). Thus, there may have indeed been turbulent blood flow preceding a stenotic portion of his right internal jugular vein. This radiologic finding offered a potential alternative explanation for his auditory complaints besides the designation of auditory hallucinations.

The presence of a high jugular bulb, which can erode into the inner ear, was noted in 8.5% of temporal bone CT scans and 8.2% of temporal bone specimens.6 High jugular bulbs have been known to potentially cause a pulsatile tinnitus7 and a subjectively nonpulsatile tinnitus.4 They can also cause a variety of other inner ear disturbances, resulting in symptoms such as hearing loss, vertigo, and imbalance.5 Jugular vein ligation has been shown to successfully treat tinnitus, although the symptom has spontaneously regressed in some individuals.8 Nevertheless, surgical management is generally the most definitive treatment for this abnormality.9

Although this patient was a poor historian and provided a very nonspecific temporal account of his tinnitus, the presence of his jugular abnormality cannot be ignored as an etiology for his symptoms. Framing effects were certainly witnessed in the management of this patient with regard to his past psychiatric history of schizoaffective disorder and his current suicidal ideations. These effects allowed for a delay in referral to treat his tinnitus and potentially reduce his psychosocial comorbidities.

Framing effects have a significant influence on medical decision-making.1-3 It has also been suggested that framing effects are generally underappreciated and understudied in common medical practice.10 Diagnostic checklists, including an effective cognitive approach, may reduce the risk of failed heuristics.11 Nevertheless, framing effects and other medical decision-making biases should be further empirically studied so that patients may receive the best possible treatment.

Conflicts of interest: None.

Patient consent: Verbal permission was received from the patient to publish this case, and the information was de-identified to protect anonymity.