Psychiatric and Neurocognitive Manifestations of Sheehan Syndrome: A Case Report

Psychiatric and Neurocognitive Manifestations of Sheehan Syndrome: A Case Report

To the Editor: Sheehan syndrome is a state of hypopituitarism traditionally associated with necrosis of the anterior pituitary occurring secondary to postpartum hemorrhage.1 It is not uncommon for the diagnosis to be delayed for months or years in patients presenting with nonspecific symptoms. Although not the classic presentation, Sheehan syndrome may present with psychiatric symptomatology such as psychosis and neurocognitive dysfunction. We report a case of Sheehan syndrome presenting with neuropsychiatric disturbances years after postpartum hemorrhage.

Case report. History of present illness. Ms A was a 59-year-old Hispanic woman, with a 1-year history of bipolar disorder and dementia, brought to the emergency department for worsening psychiatric symptoms during the last 2 months, including mood lability, auditory and visual hallucinations, paranoid delusions, irregular sleep/wake patterns, cognitive impairment, and decreased attention to self-care. The family reported that, 1 year prior to her presentation, she had been diagnosed with dementia and bipolar disorder. They were unclear how these diagnoses were established, and no medical records were available from which to obtain this information. Per family report, the patient was being prescribed only donepezil; no other psychiatric medications were currently prescribed.

Past history. The family reported that Ms A had initially experienced psychiatric symptoms after the birth of her second child at age 30 years that was complicated by severe postpartum hemorrhage requiring hysterectomy. In addition, there was no past history of dementia or psychiatric illness in the family. She had been prescribed medications, including glucocorticoid and thyroid supplementation, for the treatment of medical issues that resulted from the medical complications associated with the pregnancy. This medication was to be continued indefinitely after the birth of her second child. However, family reported that her recent treatment for these conditions was complicated by frequent medication changes, as she was receiving treatment from 2 physicians for treatment: 1 in El Paso, Texas, and 1 in Ciudad Juarez, Mexico. For example, both the medications and dosages of medications used for hormone supplementation varied greatly based on provider and country of practice. Noncompliance was also an issue as the patient had been taking only 1 to 2 doses of the medications per week for the last year, instead of daily, as prescribed.

Physical and mental status examination. The patient presented with thin eyebrows, small thyroid, trace edema, and slow reflexes. Mental status examination revealed the following: She was oriented only to person and demonstrated impairments in attention, concentration, and memory. She presented with poverty of speech, mood lability, persecutory delusions, auditory and visual hallucinations, and a disorganized thought process. She had no insight into why she was brought to the hospital. 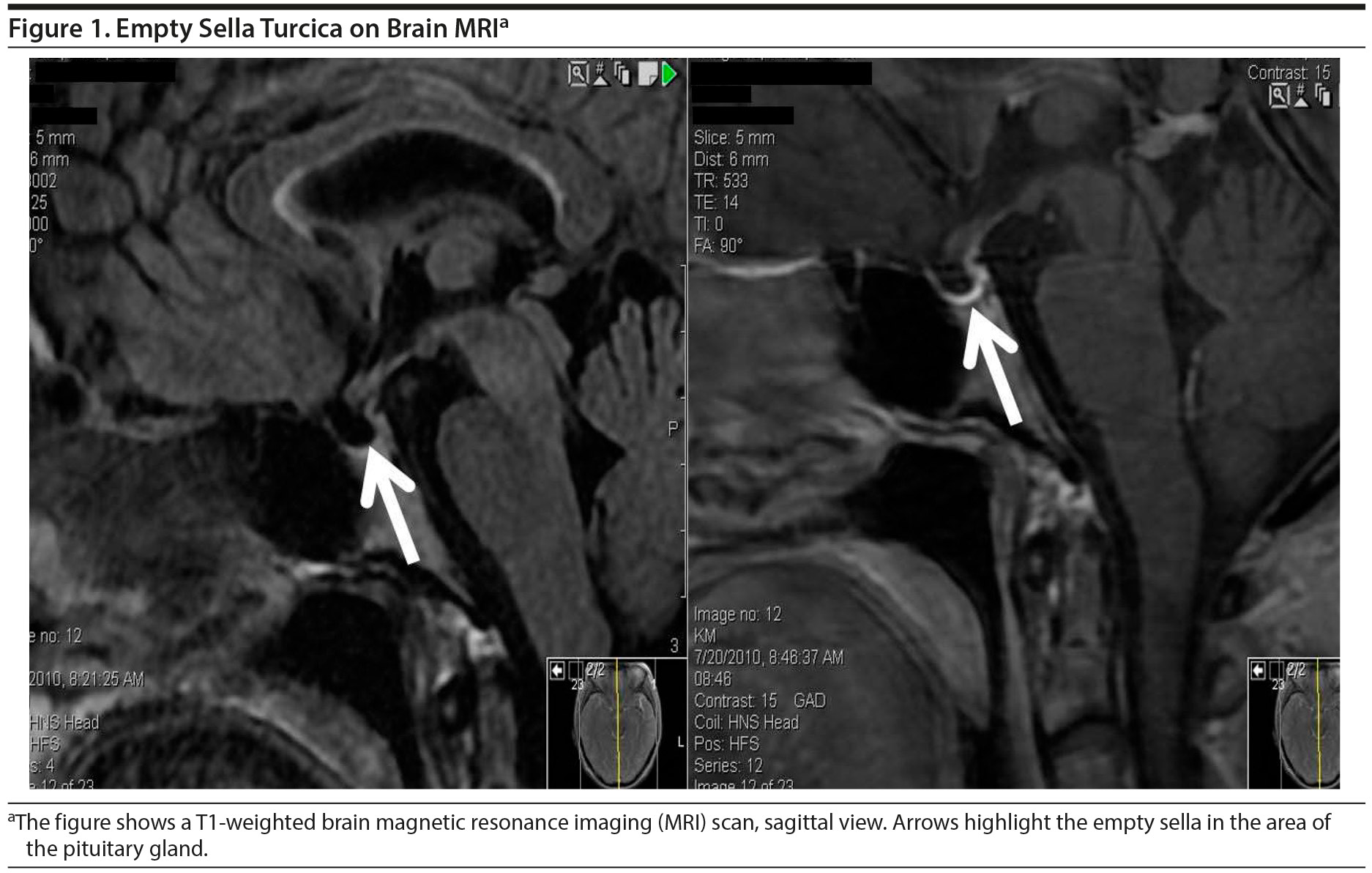 Treatment course. Physical examination, laboratory testing, and neuroimaging findings were indicative of a hypopituitary state with the history suggestive of Sheehan syndrome. Hormone supplementation was initiated with intravenous hydrocortisone 100 mg every 8 hours, intravenous levothyroxine 100 mg every 24 hours for 3 days, and an orally administered dose of 100 mg of levothyroxine. One milligram daily of risperidone was used to treat psychosis. Ms A was eventually switched to orally administered prednisone that was tapered to a dose of 5 mg/d. At discharge on day 8, the patient demonstrated an improvement in all of her physical symptoms; she was oriented to person and place, and the hallucinations had stopped. Memory impairment, however, remained. The patient was discharged to the care of her family with home health care support and outpatient psychiatry follow-up.

Follow-up outpatient visit. By serendipity, the patient was scheduled to follow up with me (A.M.J.) in the outpatient psychiatric clinic several months after admission. At that time, all the psychiatric symptoms had again reemerged. She was disheveled, labile, disorganized, and psychotic and appeared to be internally stimulated. Due to the psychiatric symptoms, formal neuropsychiatric testing (Montreal Cognitive Assessment) could not be obtained. She had been prescribed rivastigmine, levothyroxine, and prednisone by internal medicine; however, she was again noncompliant with treatments. Laboratory results demonstrated signs of a hypopituitary state with low levels of thyroid-stimulating hormone (0.04 mIU/dL), free T4 (0.96 ng/dL), and cortisol (1.2 µg/dL). She was scheduled for both endocrinology and psychiatry follow-up but did not keep her appointments and was subsequently lost to follow-up.

As highlighted in previously published case reports,2-11 the patient described in this case study presented with acute neuropsychiatric symptoms associated with Sheehan syndrome. While the endocrine disturbances of Sheehan disorder can lead to the acute neuropsychiatric presentations, it remains uncertain as to the long-term effects that may result, particularly in the context of medication noncompliance. The reemergence of her psychiatric symptoms noted on outpatient follow-up associated with the panhypopituitary laboratory results and the history of noncompliance suggest that these symptoms were related to hypopituitary state rather than a primary psychiatric syndrome. While many of the acute neuropsychiatric symptoms (ie, delirium, mood, psychosis) responded to treatment of the underlying endocrinopathies and a small dose of antipsychotic medications, the patient was left with significant residual neurocognitive dysfunction. While other causes of a dementing process (ie, Alzheimer’s disease) cannot be ruled out, one is left to wonder what the effects of chronic endocrinopathies related to Sheehan disorder had on the development of this condition.12-14 Unfortunately, a causal relationship between the onset of endocrinopathies and the presentation of neurocognitive deficits in our case cannot be determined, as more than 20 years elapsed before psychiatric symptoms brought her to the attention of mental health providers. A delay in diagnosis and, therefore, treatment secondary to the variable presentation of the illness may have long-term consequences for neurocognitive functioning. That the patient was receiving medical care from physicians in both Mexico and the United States may have contributed to her suboptimal treatment and subsequent worsening of her neurocognitive functioning. In conclusion, further research examining the relationship between psychosis, dementia, and hypopituitarism in the context of Sheehan syndrome is warranted.

Funding/support: There are no sources of funding to report in association with this case report.