To the Editor: Reverse sleep state misperception (RSSM) is essentially wake state misperception, characterized by gross subjective overestimation of sleep duration and efficiency in contrast to what is evidenced by objective monitoring.1 The condition has also been designated as "asymptomatic insomnia," "reverse paradoxical insomnia," and "positive sleep state."2-4 Patients fail to notice decreased nocturnal sleep efficiency and duration and consequently can complain of excessive daytime sleepiness, fatigue, and nonrestorative sleep after morning awakening. This type of sleep misperception is in exact contrast to an insomnia subtype described as paradoxical insomnia,5 previously known as sleep state misperception (SSM).6 SSM is characterized by subjective underestimation of sleep quality and duration with normal objective parameters on polysomnography (PSG) and actigraphy. So far, no common clinical factor has been described in relation to RSSM. We present this interesting symptom in a patient with recently diagnosed dementia and rapid eye movement (REM) sleep without atonia (RSWA).

Case report. Mr A, a 75-year-old man, presented to the sleep center for evaluation of increased need for sleep over a 3-year period. At the time of presentation, he described needing 15-16 hours of sleep/night. He denied feeling sleepy when up and about, and his Epworth Sleepiness Scale7 score was 4. There were no symptoms suggestive of cataplexy, hypnagogic or hypnopompic hallucinations, or sleep paralysis. His wife described mild snoring without witnessed apneas. Symptoms of dream enactment behavior including "punching and kicking" were also reported. His wife believed that these behaviors were related to his dreaming. After most nights, he would recall awakening once or twice to urinate, followed by uneventful return to sleep.

There was no history of restless legs syndrome or any movement suggestive of seizures. His current medications included bupropion, ranitidine, donepezil, and citalopram. Past history was significant for depression, recently diagnosed dementia not otherwise specified (NOS), and absence of any substance abuse. Family and social histories were noncontributory. On examination, Mr A’s weight was 160 lb (73 kg), height was 67 in, body mass index was 25.1, neck size was 16 in, and Friedman score was 4. His mood was euthymic, with full range of appropriate affect. Mr A’s neurologic examination revealed cogwheel rigidity in arms but no tremors.

After a 2-week recording of sleep diary (Figure 1) and actigraphy (Figure 2), which indicated self-reported sleep and actigraphic quiescent time of 8.5 to 20 hours (mean of 15 hours) daily, an overnight PSG including 5-channel electroencephalograph (EEG) and chin electromyograph was recorded (Figure 3). Sleep latency was 263 minutes. Total sleep time was 5.4 hours, despite time in bed of 16.4 hours, and sleep efficiency was markedly decreased at 33%. Stage N3 sleep was reduced at 2.5%. Periodic leg movements in sleep (PLMS) occurred at a rate of 49.4 per hour with an arousal index of 16.4 per hour and apnea-hypopnea index of 2.2 per hour with no significant oxyhemoglobin desaturation. There was increased chin electromyographic activity during REM sleep. Movements of arms were observed during REM sleep with no complex behavior. There was very little extremity movement or position change during electrographically defined wake time in bed, consistent with the appearance of quiescent time during prior actigraphy. There was no epileptiform activity noted in the EEG, and electrocardiogram revealed normal sinus rhythm. In the morning, Mr A reported sleeping during the entire recording period. A multiple sleep latency test was not performed because of insufficient prior nocturnal sleep of less than 6 hours. 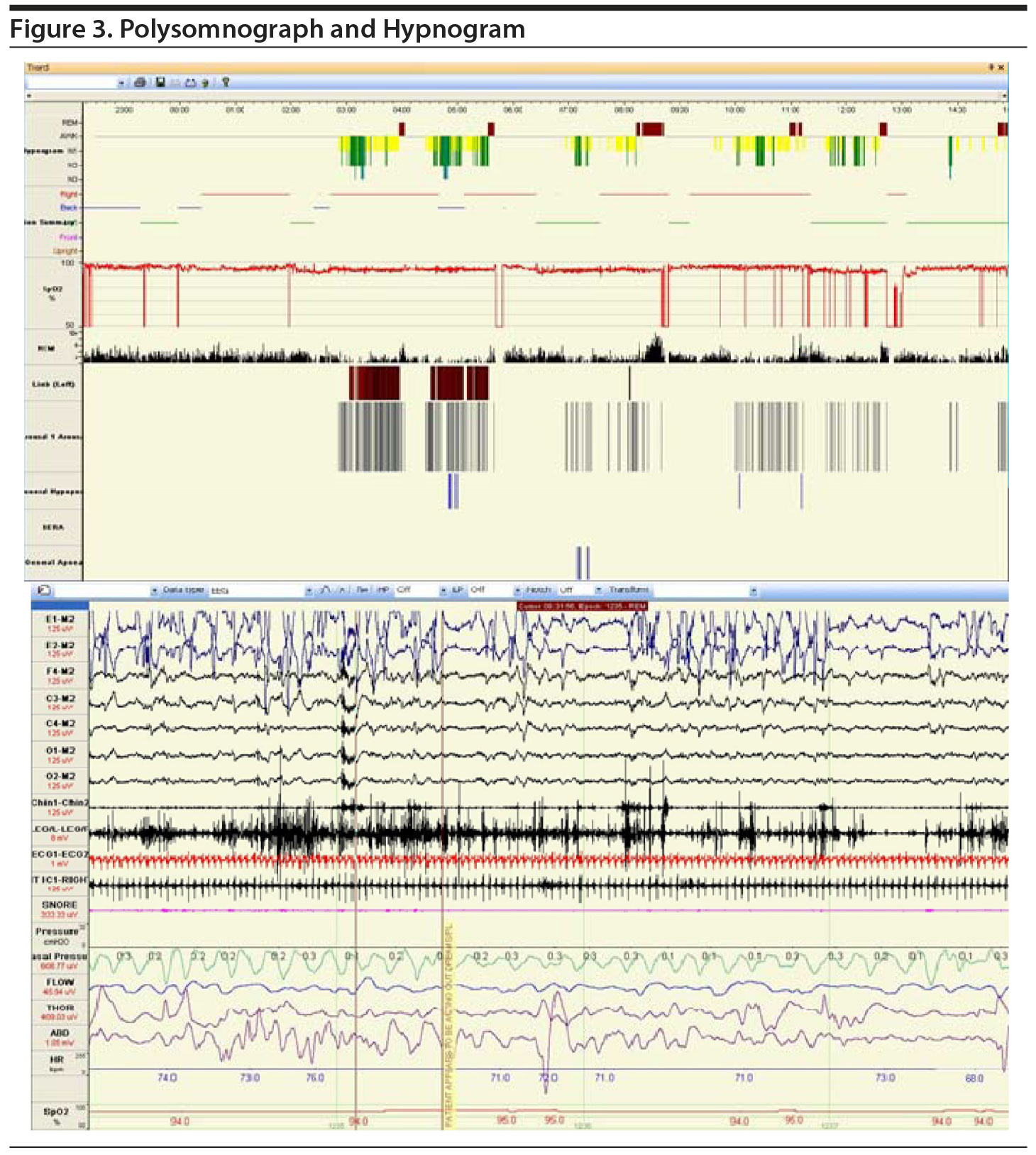 Therapy was initiated with suggested restriction of time in bed. Ropinirole was added empirically in view of PLMS associated with sleep fragmentation. At the 5-month follow-up clinic visit, his wife reported a decrease in the frequency of periodic limb movements, but there was not much reduction of the time spent in bed.

We performed a systematic literature review for similar reports (English language only) published through September 2015 using PubMed, Google Scholar, and Scopus and querying sleep misperception, reverse sleep state misperception, wake state misperception, and reverse paradoxical insomnia. RSSM has been reported in patients with many unrelated clinical disorders, including psychiatric disorders, multiple sclerosis, structural brain lesion involving suprachiasmatic nuclei, and various pain syndromes.2-4,8 No common clinical factor has been identified in the reported studies, but RSSM has been reported as an unrecognized cause of daytime sleepiness, which is absent in the case we report.1,4

In our case, the patient’s memory dysfunction may account for this unusual symptom, in view of his recent diagnosis of dementia NOS. No formal cognitive screening was done in the sleep clinic. He may well not remember being in bed awake, and reports this as sleep time. The case includes history of dream enactment behavior and PSG findings of RSWA, decreased stage N3 sleep, and PLMS. These features strongly suggest the possibility of REM sleep behavior disorder (RBD), which is a harbinger of an underlying neurodegenerative process. His use of citalopram for depression can lead to RSWA, which may also implicate early neurodegeneration.9 Therefore, this patient could be suffering from an underlying α-synucleinopathy. RBD would be expected in a neurocognitive disorder like dementia with Lewy body or Parkinson’s disease dementia.10,11 While decreases in objective sleep efficiency and quality of time awake in neurodegenerative conditions have previously been described,12 sleep misperception has not been reported before in such conditions.

RSWA may also be associated with increased α EEG activity during sleep, which has been hypothesized to interfere with restorative sleep.13 Schneider-Helmert and Kumar14 described in 1995 the association of α EEG intrusion with significantly decreased perception of intermittent awakenings and overestimation of sleep duration. However, in Schneider-Helmert’s 2007 study,3 no such difference was found in sleep perception between insomniacs with and without this increased α EEG activity feature.

Sleep clinicians must be aware of the influence of patients’ cognitive deficits that influence how they present their complaints of sleep disturbance.