Cushing’s Syndrome and Psychosis: A Case Report and Literature Review

Cushing’s syndrome is an endocrine disorder with an incidence of approximately 0.2 to 0.5 per million people per year, affecting women more often than men.1,2 Cushing’s syndrome is a result of chronic excess glucocorticoid production from the adrenal glands, leading to a distinctive set of clinical symptoms and signs. The syndrome may be adrenocorticotropic hormone (ACTH) dependent (80%-85%) or independent (15%-20%). ACTH-dependent causes include, most commonly, a pituitary corticotropic adenoma (Cushing’s disease); less frequently, an extrapituitary tumor (ectopic ACTH syndrome); and, rarely, a tumor-secreting corticotropin-releasing hormone. ACTH-independent causes include unilateral adrenocortical tumors, which can be benign or malignant, or bilateral adrenal hyperplasia.1,2 Common features of Cushing’s syndrome include centripetal fat deposition, abdominal striae, facial plethora, muscle atrophy, bone density loss, immunosuppression, and cardiovascular complications. Psychiatric complications include irritability, anxiety, depressed mood, and cognitive impairment.1,2 Less commonly reported symptoms include mania or hypomania and frank psychosis.1-5 Psychosis is a rare manifestation of Cushing’s syndrome; therefore, the literature on the subject is limited and consists mainly of clinical case reports.1,2 We report a case of Cushing’s syndrome misdiagnosed as schizophrenia-like psychosis for more than 10 years.

Ms A was a 47-year-old woman with no definite family or past history of mental or neurologic disorders. At 35 years of age, she began to experience psychiatric symptoms, including delusion of reference, emotional lability, insomnia, and wandering at night. Ms A was diagnosed with schizophrenia according to DSM-5 diagnostic criteria and admitted to a psychiatric hospital for the first time. Since then, she had been treated with psychotropic drugs such as risperidone (maximum dose: 8 mg/d) and levomepromazine (maximum dose: 300 mg/d). At 36 years of age, her diagnosis was changed to schizoaffective disorder according to DSM-5 criteria because of a manic episode. Lithium (maximum dose: 800 mg/d) was thus prescribed, and levomepromazine was discontinued. However, her psychiatric symptoms were refractory to these medications, and she was admitted to a psychiatric hospital several times over the next 11 years.

At age 47, Ms A’s 11th thoracic vertebra was spontaneously broken. Central obesity and moon face were also observed. A diagnosis of Cushing’s syndrome was suspected by an orthopedist. She was admitted to our hospital for detailed examination. Her body weight and height were 139 lb (63 kg) and 5 ft 4 in (165 cm), respectively. Her 24-hour urinary free cortisol level was elevated at 696.0 μg/d (reference range: 11.2-80.3 μg/d). Serum ACTH and cortisol levels were 55.7 pg/mL (reference range: 7.2-63.3 pg/mL) and 24.9 µg/dL (reference range: 6.2-18.0 µg/dL), respectively. No variation was observed within 24 hours of serum cortisol level testing. She was given a dexamethasone suppression test, and a high dose of dexamethasone suppressed the serum cortisol levels. Magnetic resonance imaging (MRI) showed a heterogeneous sellar mass with mild suprasellar extension. No definite atrophy, including the hippocampal area, was observed. The mass measured 12 × 6 × 5 mm (Figure 1). These findings supported the diagnosis of Cushing’s syndrome. 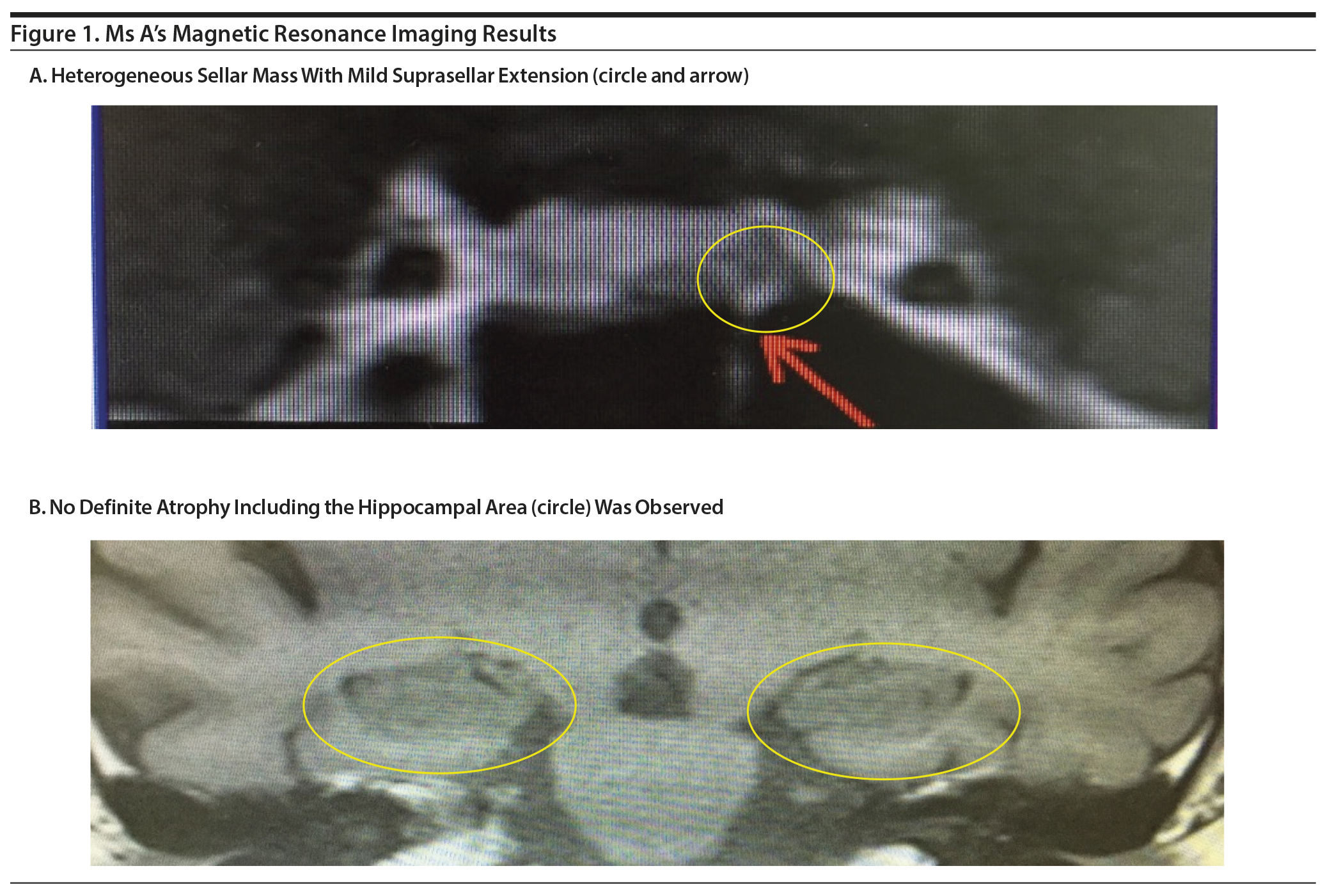 Ms A’s Mini-Mental State Examination (MMSE)6 score was 24, and mild cognitive dysfunction was observed, while neurologic examinations showed no definite abnormality. Transsphenoidal adenomectomy was performed to remove the sellar mass. Histopathologic examinations showed that the mass was pituitary corticotropin adenoma immunoreactive for ACTH. Shortly after surgery, Ms A’s serum cortisol levels decreased dramatically to 2.0 µg/dL. Thus, her psychotropic medications (lithium 800 mg/d and risperidone 2 mg/d) were discontinued, and she was started on replacement with cortisone acetate 30 mg/d. Since then, she has had no psychiatric symptoms other than insomnia, which was treated with nitrazepam 5 mg/d for 18 months after surgery. Her MMSE score and body weight remained at 30 and 105.8 lb (48 kg), respectively. She currently receives no medical care for these or related conditions.

Erroneous recognition of psychotic symptoms as solely psychiatric can lead to secondary complications arising from neuroleptic treatment—hyperprolactinemia, metabolic syndrome, and functional secondary hypercortisolism.2 However, it is not a rule that psychotic symptoms precede full-blown Cushing’s syndrome. Barnett and colleagues14 reported a case of a 23-year-old woman who developed psychotic symptoms after rapid acceleration of Cushing’s syndrome. She required transfer to the acute psychiatric ward after she began hallucinating and became paranoid, impulsive, and suicidal. She underwent a bilateral total adrenalectomy.14 Terzolo et al15 reported a case of a 35-year-old woman with ectopic Cushing’s syndrome caused by an adrenal pheochromocytoma. At hospital admission, clinical and hormonal data were inconclusive, and it was decided to continue to observe the patient. Four months later, she became symptomatic with hypertensive and psychotic crises and glycemic decompensation. By that time, full-blown Cushing’s syndrome was evident. When a left adrenalectomy was performed, signs and symptoms of the syndrome resolved.15 Górniak and Rybakowski16 reported a case of a 24-year-old woman with an acute paranoid syndrome in the course of Cushing’s syndrome caused by a hypophyseal adenoma. She was treated with haloperidol and fluphenzine with no improvement, but treatment with clozapine was successful. After resection of the hypophyseal adenoma, no relapse of the psychotic disorder was noted despite discontinuation of clozapine.16

Several case reports17 indicate that the mifepristone-induced receptor blockade may lead to significant clinical improvement in patients in whom surgery and inhibitors of adrenal steroidogenesis fail to control hypercortisolism. Mifepristone is an antiprogestin, which at higher doses competes with glucocorticoids for binding to their receptor. Due to its rapid onset of action, mifepristone may be particularly useful in acute crises such as cortisol-induced psychosis.17 Combined use of mifepristone and etomidate has been reported in successful treatment of severe psychosis unresponsive to treatment with conventional antipsychotic drugs caused by an ectopic ACTH-producing lung carcinoma and Cushing’s syndrome.18 Myhill et al19 reported a case of psychosis with Cushing’s syndrome in which the symptoms were ameliorated by cortisol biosynthesis with ketoconazole and metyrapone.

Diagnosis and Treatment of Ms A

The present case had been misdiagnosed as schizophrenia-like psychosis for more than 10 years. Transsphenoidal adenomectomy resulted in amelioration of the patient’s psychiatric symptoms. Previous reports1-3,19,20 have shown improvement of most psychiatric symptoms after successful treatment of Cushing’s syndrome, which is correlated with successful reduction of peripheral cortisol levels while cognitive dysfunction tends to remain impaired. In the present case, based on the MMSE score, cognitive dysfunction also seems to have improved. Cushing’s syndrome causes significant loss of brain volume, particularly in the hippocampus.1-3,19,20 MRI in the present study showed no definite atrophy of the hippocampal area. These MRI results may explain why cognitive dysfunction improved after successful treatment of Cushing’s syndrome with the reduction of peripheral cortisol levels. Prolonged excess exposure to glucocorticoid causes a variety of psychiatric symptoms of Cushing’s syndrome through a number of structural and neurochemical changes including dendritic atrophy, abnormal loss of synapses, impaired neurogenesis, increased susceptibility to toxic insults, and abnormal regulation of neurotransmitters such as dopamine, serotonin, norepinephrine, and glutamate.1-3 Prolonged excessive exposure to glucocorticoid may eventually cause dementia.21,22 A meta-analysis23 showed heightened levels of morning cortisol in patients with schizophrenia and bipolar disorders with no difference between the 2 disorders.

Patient consent: Oral consent was received from the patient to publish the case report, and information has been de-identified to protect anonymity.