To the Editor: As we know, patients do not always present with textbook symptoms of an illness. Infrequently, psychiatric manifestations are the only presenting symptoms of a brain tumor. Certain features that present in early stages of psychiatric disorders may be indicative of a neurologic or other organic etiology and should herald neuroimaging, as is described in our case report.

Case report. History of present illness. A 59-year-old, right-handed, non-Hispanic white man with a psychiatric history of major depressive disorder for the past year was brought into the emergency department by his wife for worsening depression and disorganized behavior over the course of 3 weeks. He had obsessive thoughts about arranging things in symmetrical patterns, difficulty sleeping, loss of appetite, and anhedonia, with no reported substance use or suicidal or homicidal ideation. His wife reported that his bizarre and disorganized behavior further intensified in the previous week, ie, he was urinating on the rug, rubbing his genitals against the bathroom counter, staring into space without moving for prolonged periods of time, and arranging his food in certain symmetrical patterns. At baseline, the patient was a high functioning artist with a recent increase in work responsibilities 3 weeks prior to admission, at which time his symptoms worsened and he had to terminate employment. The patient’s therapist, who had been working closely with him for 1 year, attributed his decompensation possibly to financial stress and the recent death of a close friend. In addition to therapy, he had been taking escitalopram 20 mg for 1 year, prescribed by his primary care physician for mild depression, with minimal effect. On evaluation, the patient was disheveled, though calm and cooperative, with poor eye contact. No gross deficits were noted in speech or language. He described his mood as "distant," presented with a flat affect, and exhibited thought blocking to questions that required processing of information. His gait was ataxic and Romberg test was negative. He denied auditory and visual hallucinations but reported having obsessions and compulsions. His Folstein Mini-Mental Status Examination1 score was 15/30; he was not oriented to date, exhibited deficits in delayed recall, and was unable to spell "WORLD" backward, perform 3-step commands, and copy a design. No focal motor or sensory deficits were appreciated.

Course of hospitalization. His age of greater than 40 years and constellation of new-onset psychiatric and neurologic symptoms, ie, disorganized thinking, obsessions, compulsions, gait changes, and urinary incontinence, were concerning for an underlying neurologic etiology and warranted neuroimaging.

Computed tomography scan of the head demonstrated a mass, 5.3 cm × 6.8 cm anteroposterior, in the frontal lobe around the corpus callosum accompanied by edema and mass effect on the frontal horns and anterior body of the right lateral ventricle (Figure 1). The patient was subsequently transferred to neurosurgery; brain biopsy demonstrated high grade glioblastoma multiforme requiring surgical intervention. 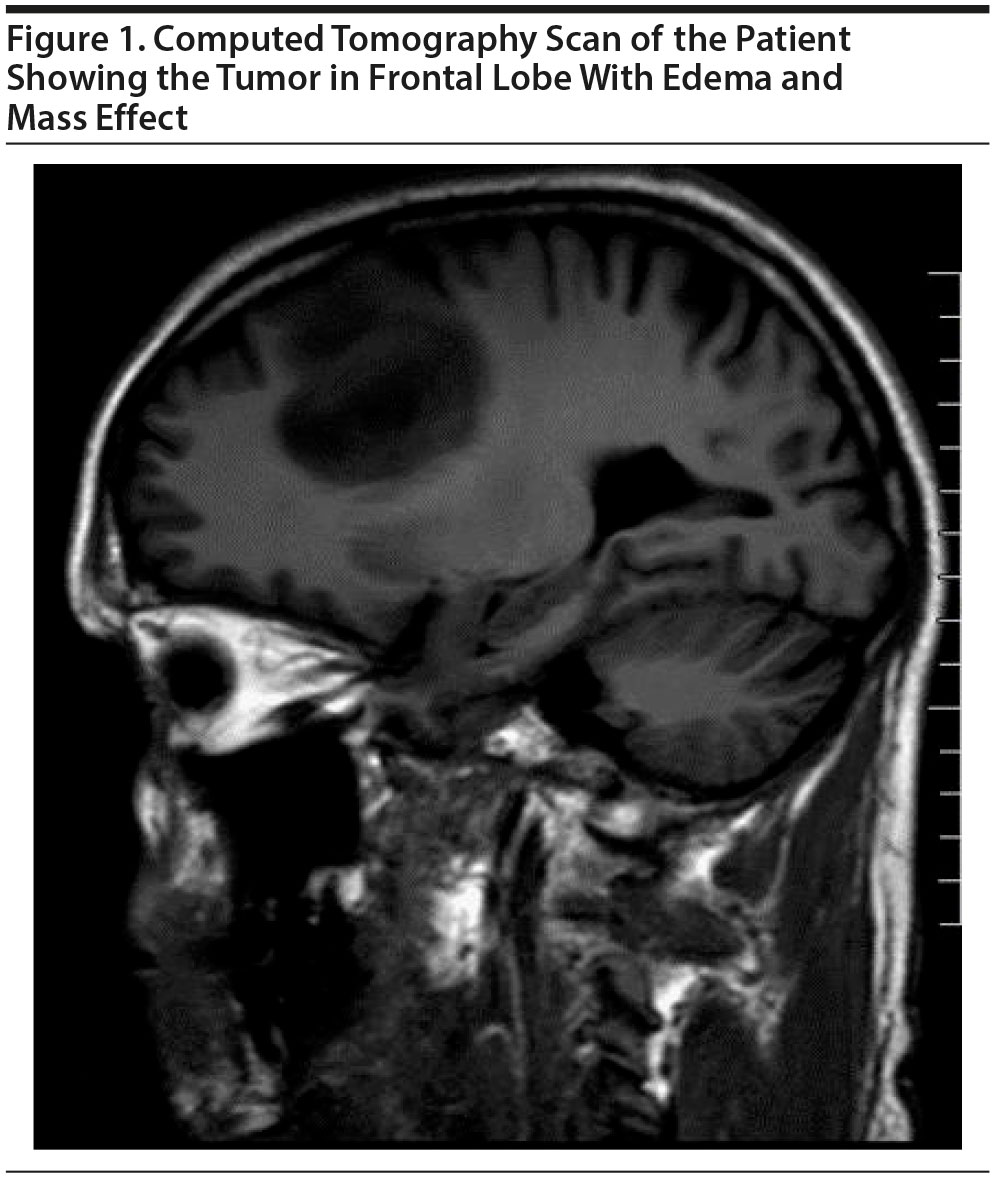 Recommendations based on a case series6,7 advise brain imaging in patients who are over 40 years of age with new-onset psychiatric symptoms, present with suggestive neurologic signs or symptoms, and have an atypical presentation or acute changes in previous symptoms. Camprodon and Stern9 suggest similar criteria with the exception of age > 50 years.

This case elucidates the importance of early neuroimaging as part of a routine workup for atypical psychiatric symptoms. In the case of fast-growing tumors, early detection is of paramount importance— it’s a life-saving measure that can drastically improve a patient’s quality of life.

Disclaimer: Consent was obtained from the patient’s legal guardian to publish the case report and brain scan.