Late-Onset Rhabdomyolysis Associated With an Intramuscular Injection of Fluphenazine Decanoate

Late-Onset Rhabdomyolysis Associated With an Intramuscular Injection of Fluphenazine Decanoate

To the Editor: Rhabdomyolysis is a potentially life-threatening condition of skeletal muscle damage with degradation of cellular components and subsequent transfer of toxic intracellular material into the blood circulation. The etiology of rhabdomyolysis includes muscle trauma, ischemia, drugs, toxins, metabolic disorders, and infections.1 Among patients who have undergone treatment with neuroleptics, neuroleptic malignant syndrome (NMS) is one of the leading causes of rhabdomyolysis. However, NMS is often difficult to distinguish from other disorders.2 We report a case of late-onset rhabdomyolysis without NMS that developed after an intramuscular injection of fluphenazine decanoate, the lesion of which was localized at the injection site.

Case report. Ms A is a 34-year-old Japanese woman with schizophrenia, paranoid type (DSM-IV-TR criteria) who was referred to our psychiatric unit for the evaluation of elevated levels of creatine phosphokinase (CPK) and pain in the left hip. She had received an intramuscular injection of fluphenazine decanoate (50 mg) every 4 weeks for 3 years. The most recent injection was performed 25 days before her admission. She was alert and had no mental change. On physical examination, muscular rigidity and autonomic dysfunction were absent. She was afebrile with a body temperature of 99.5°F (37.5°C) but had pain and swelling in the left hip that had begun and gradually worsened over the past 3 days. Laboratory studies revealed a CPK level of 21,113 IU/L, acute renal failure, and liver dysfunction. Leukocytosis and myoglobinuria were not evident.

We treated the patient with intravenous fluid replacement, and her serum CPK and creatinine levels gradually fell to normal values over the next 11 days. Fifteen days after her admission, a CT scan was performed to assess the prolonged pain and swelling in her left hip. Contrast-enhanced CT images showed a marked enlargement of the left gluteus maximus muscle with a low-density area located where she had last been injected with fluphenazine decanoate (Figure 1). A muscle biopsy was not performed. 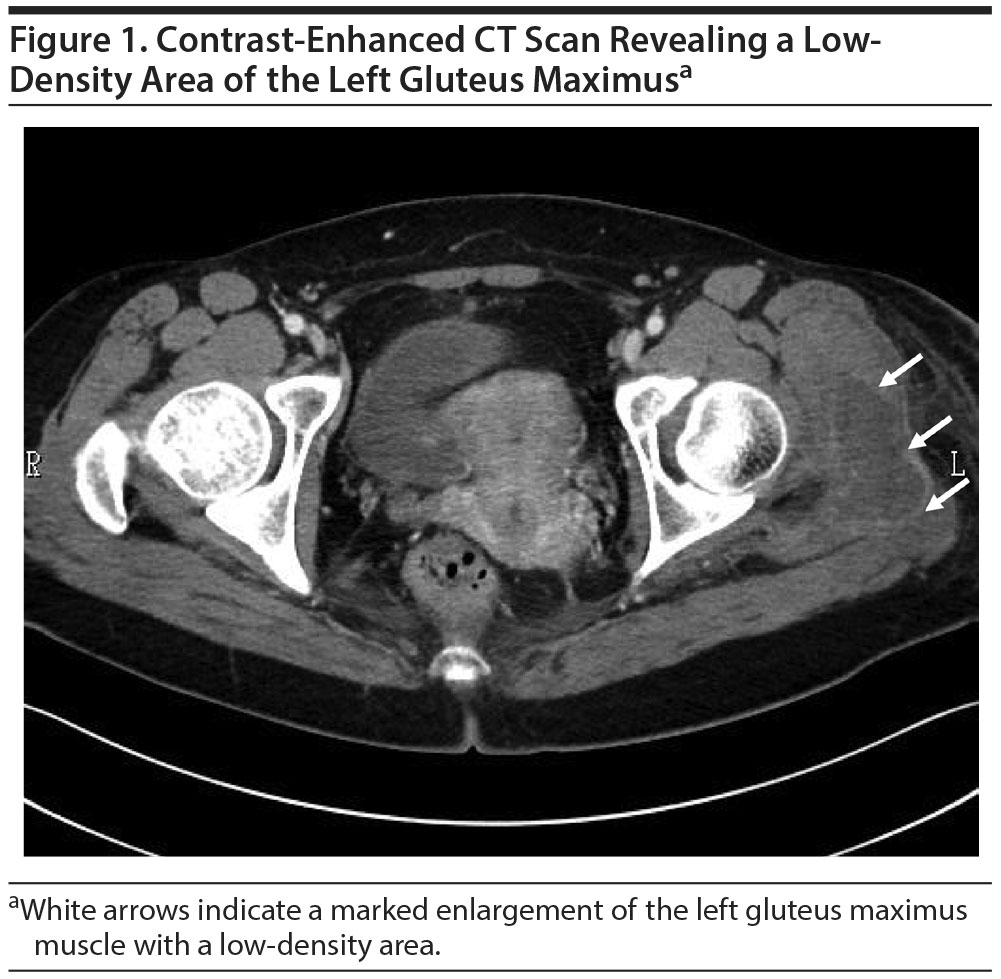 In this case, a patient with schizophrenia undergoing neuroleptic treatment developed a marked CPK elevation, and she was thus first suspected of having NMS. However, she was afebrile and had neither autonomic nor extrapyramidal symptoms. Although patients with variant NMS sometimes show vague clinical manifestations,3 our patient was asymptomatic and did not meet the diagnostic criteria for NMS.2 Several case reports4-8 described rhabdomyolysis without NMS that was postulated to be induced by haloperidol, and evidence from these cases indicated that neuroleptics could have direct toxic effects on skeletal muscle. However, such cases are extremely rare, and the underlying pathophysiology is not yet elucidated.

In our patient, localized rhabdomyolysis in the left gluteus maximus muscle was revealed by contrast-enhanced CT, and the lesion corresponded to the site in which she received the last injection. To the best of our knowledge, this is the first report of rhabdomyolysis without NMS following an intramuscular injection of fluphenazine decanoate. It is unclear if this is a traumatic or myotoxic process causing myonecrosis of the tissue. However, given the clinical course of the patient, ie, delayed rhabdomyolysis, the probability that the injection trauma was the cause is considered unlikely since the increased serum CPK activity following intramuscular injection has been reported to appear acutely.9 The cause of the delayed appearance of rhabdomyolysis in our patient remains unclear, but a toxic effect of the injected drug or an ingredient might have been involved.10 Fluphenazine decanoate is a depot injection that is slowly released for a month. Furthermore, it is of note that the administration of decanoate was shown to elicit oxidative damage in rat skeletal muscle.11 Clinicians are thus cautioned to consider the risk of late-onset rhabdomyolysis when using long-acting injectable antipsychotics.

Previous presentation: The outline of this report was presented at the 111th Annual Meeting of Japanese Society of Psychiatry and Neurology; June 4, 2015; Osaka, Japan.

Patient consent: Informed consent was obtained from the patient and the patient’s parents prior to preparing this report. The information has been de-identified to protect anonymity.