Case report. Mr A, a 29-year-old white man with a history of chronic alcoholism, presented with a severe, sudden-onset epigastric pain radiating to his back and associated with nausea and vomiting. Eight days prior to presentation, he had been started on naltrexone 50 mg daily and chlordiazepoxide 25 mg for alcohol dependence. Since initiation of these medications 8 days ago, he had not had a single alcoholic drink (confirmed by his mother who lives with him). There was no history of trauma, surgery, insect bite, or over-the-counter herbal or supplement intake.

His past history was significant for anxiety, bipolar I disorder, posttraumatic stress disorder, alcohol dependence, and seizures. He had previously been drinking a fifth (approximately 750 mL) of vodka every day for the last 12 years and had switched to daily beer consumption (6-pack) approximately 6 months ago. Although he never smoked cigarettes, he chewed a can of tobacco every 2 days for the last 14 years. He denied illicit drug use. His prescription medications included gabapentin and naltrexone.

A computed tomography scan of his abdomen showed edema in the pancreas with adjacent free-fluid and inflammatory changes consistent with pancreatitis (Figure 1). There was no pseudocyst or pancreatic necrosis. Ultrasound of the gall bladder showed a normal gall bladder without evidence of stones, wall thickening, or pericholecystic fluid collection. There was no bile duct dilatation, and his common bile duct measured 3 mm in diameter. 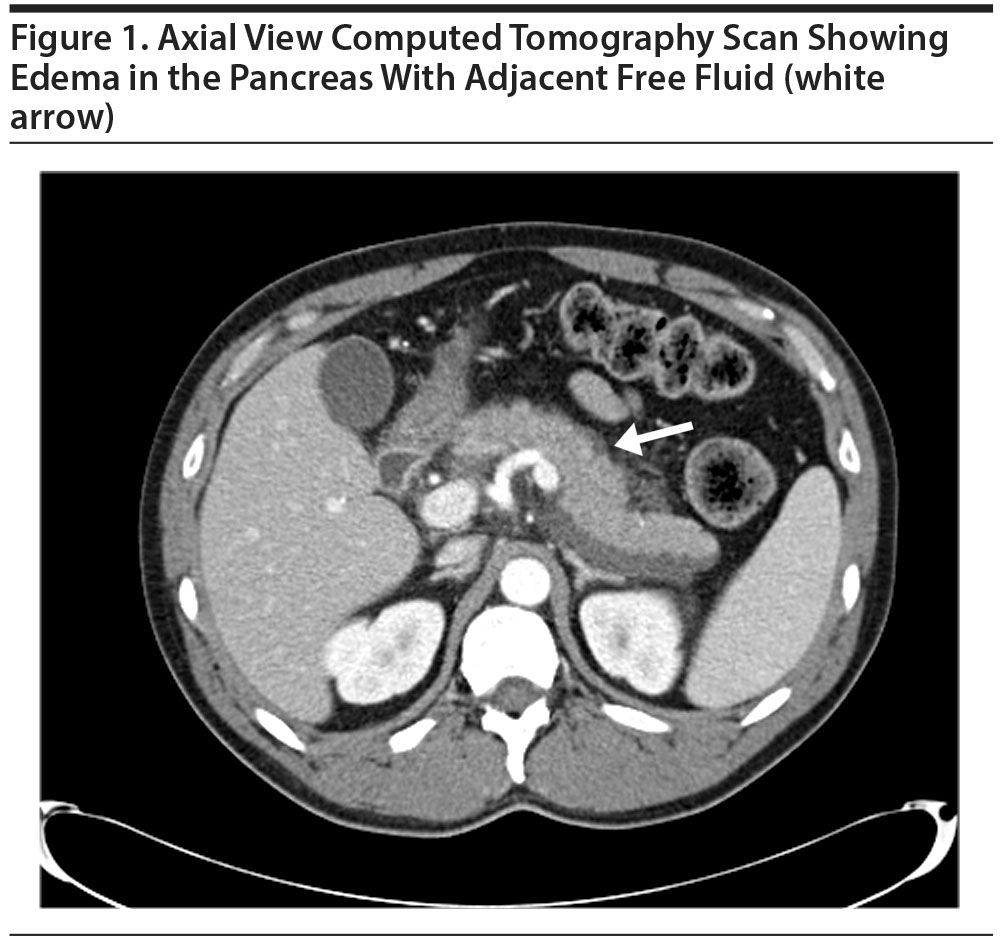 Mr A was allowed nothing by mouth and was given intravenous fluid replacement, and intravenous hydromorphone and antiemetics. His lipase level came down to 660 U/L during the next 3 days. His naltrexone was discontinued at discharge.

Given the temporal relationship of initiation of naltrexone 8 days prior to Mr A’s presentation in the absence of other risk factors, a diagnosis of naltrexone-associated acute pancreatitis was made based on modified Atlanta criteria.1

Naltrexone, which is US Food and Drug Administration approved for opioid addiction or dependence and alcohol dependence, is available in oral formulations, such as Revia, and as an intramuscular injection under the brand name Vivitrol. Naltrexone is a competitive opioid receptor antagonist with high affinity for μ receptors. Its half-life in pill form is approximately 4 hours, whereas the half-life of the intramuscular injection is 5-10 days.2 It has been associated with serious adverse reactions such as suicidality, depression, hypersensitivity reaction, eosinophilic pneumonia, and hepatotoxicity. It can commonly cause side effects such as insomnia, nausea, vomiting, diarrhea, anxiety, headache, dry mouth, back pain, abdominal pain, upper respiratory tract infection, arthralgia, myalgia, rash, dizziness, fatigue, somnolence, anorexia, constipation, hepatic impairment, increased creatine phosphokinase, and rigors.3 Rarely, it can also result in dyspnea, edema, increased blood pressure, nonspecific electrocardiogram changes, palpitations, tachycardia, and opioid withdrawal.3 The intramuscular form of naltrexone (Vivitrol) can cause injection-site reactions such as bruising, induration, nodules, pain, pruritus, swelling, and tenderness. Eosinophilia, thrombocytopenia or idiopathic thrombocytopenic purpura, and retinal artery occlusion have also been reported (per the drug package insert4). Acute pancreatitis has also been mentioned as a potential side effect of naltrexone in Vivitrol’s drug package insert.4