To the Editor: Reversible cerebral vasoconstriction syndrome (RCVS) is characterized by multiple acute-onset severe headaches, with or without acute neurologic deficits or seizures, and diffuse segmental narrowing of cerebral arteries that mostly resolves spontaneously within a few months.1–3 The exact pathophysiology of RCVS is not fully explored.4 A transient failure in the control of cerebral arterial tone with sympathetic hyperactivity and vasoconstriction seems to be crucial. This alteration may occur spontaneously or may be evoked by various endogenous and exogenous factors.5,6 We describe the occurrence of RCVS in 2 patients taking monoamine oxidase (MAO) inhibitors in the absence of other potential causes of RCVS.

Case reports. Ms A, a 48-year-old woman, was referred with sudden-onset severe headache in the occipital region and nausea. The medical history revealed a treatment-refractory depressive disorder treated with tranylcypromine at a dosage of 70 mg daily. The neurologic and general examinations were unremarkable. The brain computed tomography (CT) showed subarachnoid hemorrhage in the right frontal area. Catheter angiography showed segmental narrowing in perfusion areas of multiple arteries but most prominently of the medial and anterior cerebral arteries (Figure 1A and B). Three minutes after intraarterial administration of nimodipine, the caliber of the cerebral arteries normalized, which is suggestive for the diagnosis of RCVS.1 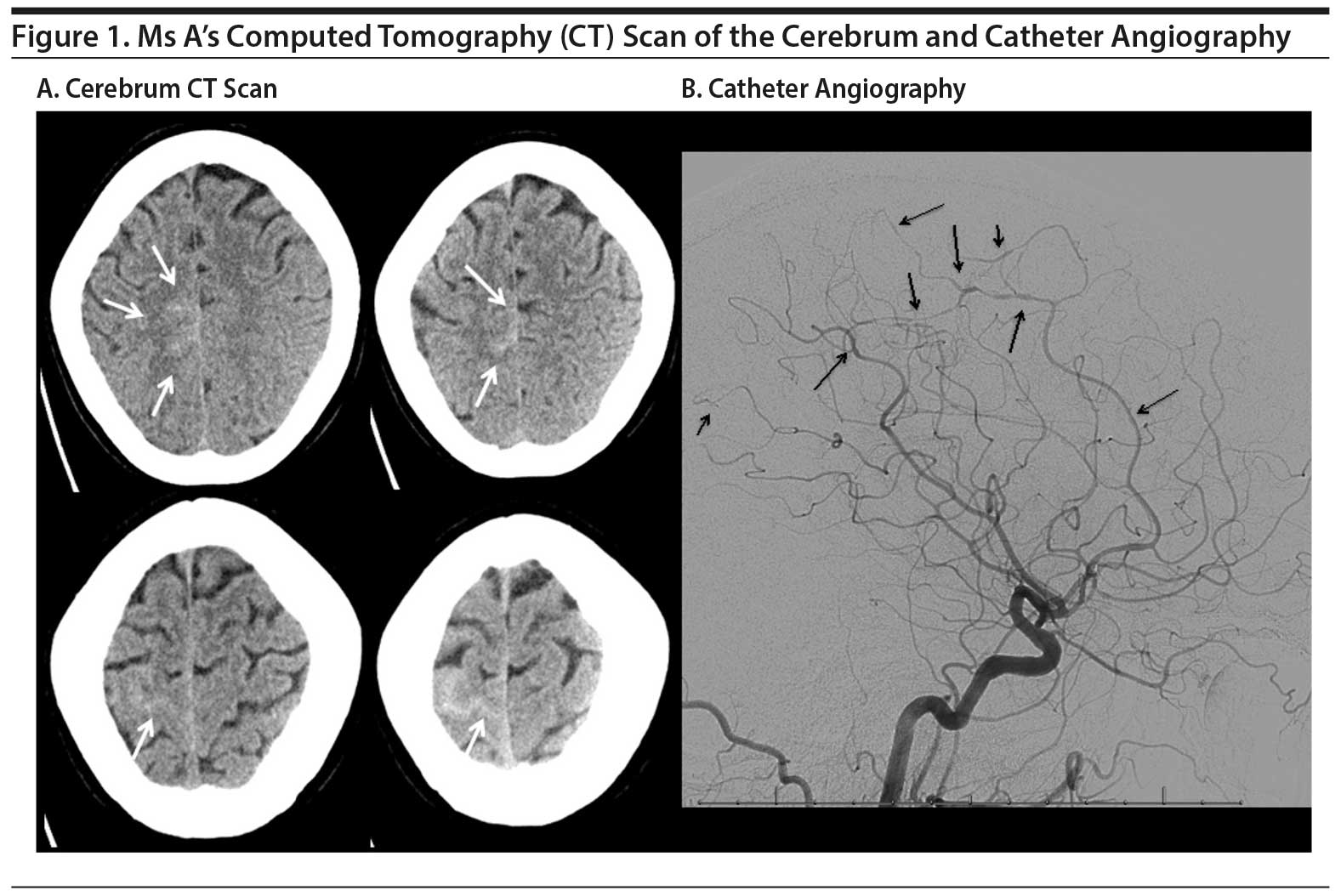 Ms B, a 55-year-old woman, was referred with transient paresis of the right hand followed by sudden-onset right-sided headache. The medical history revealed hypertension, a right-sided collum fracture, and a depressive and anxiety disorder. She had been treated with several antidepressive agents that all proved ineffective. Recently, she started taking phenelzine 90 mg daily. The neurologic examination was unremarkable. A CT of the cerebrum showed bifrontal subarachnoid blood. Catheter angiography showed segmental narrowing, most prominent in the perfusion area of both carotid arteries and the left side of the frontoparietal area (Figure 2A and B), suggestive for the diagnosis of RCVS. 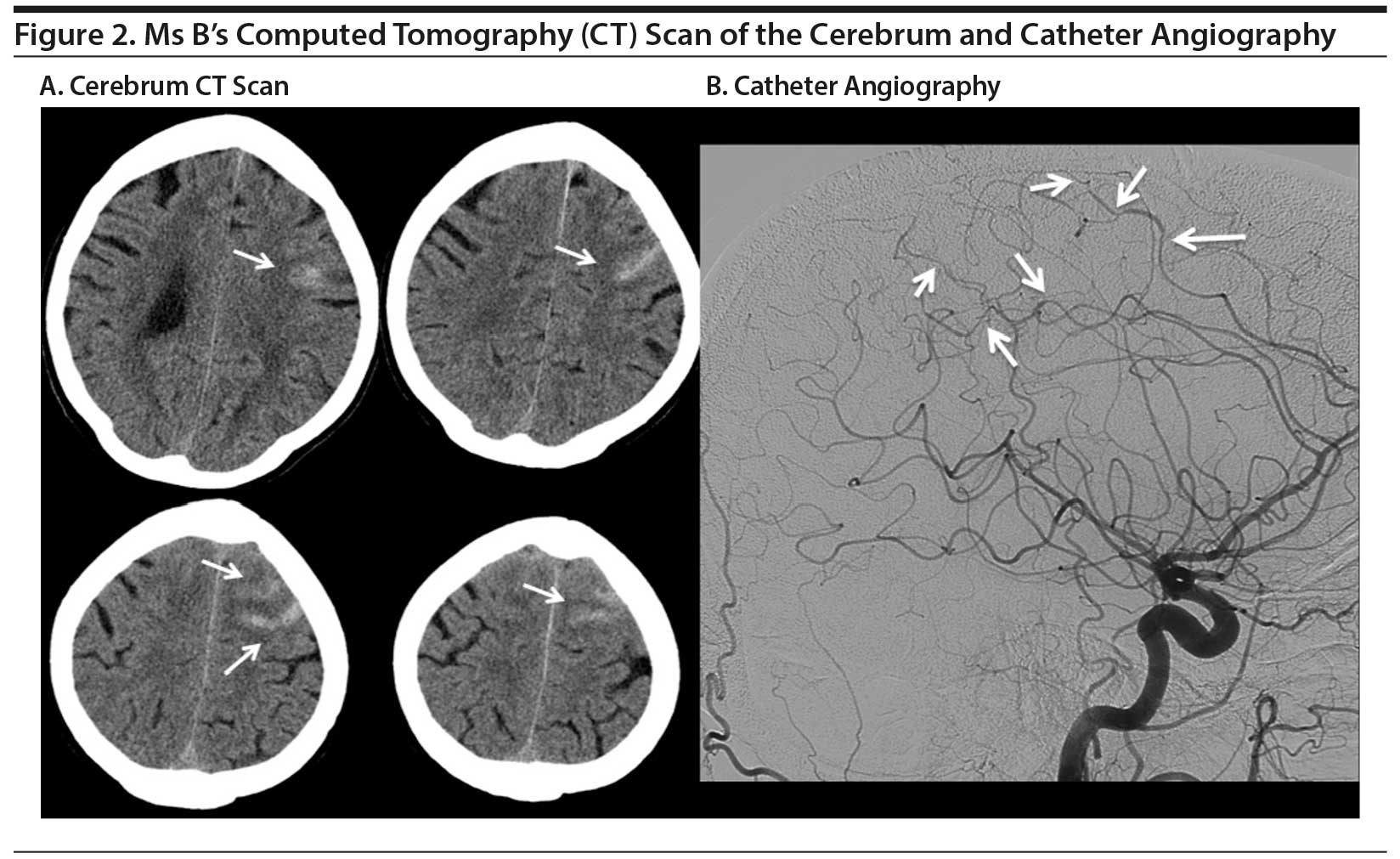 Tranylcypromine and phenelzine are both irreversible, nonselective MAO inhibitors used as third- or fourth-line therapeutics.7 MAO exists in the isotypes A and B. Both forms metabolize dopamine and tyramine.8 In addition, the A form preponderantly metabolizes serotonin and norepinephrine, and the B form preferentially metabolizes trace amines.9 The use of nonselective MAO inhibitors results in an elevation of serotonin and norepinephrine by inhibition of MAO-A and MAO-B but also in an elevation of trace amines in extracellular synaptic levels.10 These trace amines may have effects on uptake and release of serotonin, dopamine, norepinephrine, and epinephrine. In addition, the structures of phenelzine and tranylcypromine show similarities to the structure of amphetamine and thus may have some vasoconstrictor effects and may inhibit norepinephrine reuptake.9,10 Furthermore, amphetamine has similarities in structure and function with endogenous trace amines. These trace amines result in vasoconstriction and a rise of blood pressure.11 Therefore, one of the possible underlying mechanisms between use of phenelzine and tranylcypromine and the occurrence of RCVS may partly be based on their amphetamine-like effects and dopamine- and norepinephrine-releasing properties.12 Whether a selective MAO-A inhibitor reduces the risk of RCVS is not well known.

Recurrence of RCVS is possible, but the rate is unknown.1,4 There are no randomized clinical trials evaluating therapeutic strategies for RCVS. Due to the possible risk of recurrence of RCVS, we avoid prescribing irreversible nonselective MAO inhibitors in our patients. In cases in which the psychiatric symptoms respond well to irreversible nonselective MAO inhibitors, but RCVS occurs as a complication, a selective MAO-A inhibitor, for instance moclobemide, might be considered. Selective MAO-A inhibitors are supposed to be less potent regarding antidepressive effects than tranylcypromine and phenelzine, but they also might have less vasoactive properties, probably due to the absence of amphetamine-like effects and the reversibility of moclobemide. In patients in whom psychiatric symptoms have not yet responded, MAO inhibitors should be stopped as soon as possible after RCVS has occurred. However, it is highly recommended to consult a psychiatrist before stopping or switching MAO inhibitors.