Quetiapine, a second-generation antipsychotic (SGA), is regularly prescribed for the treatment of psychotic and mood disorders. Quetiapine use is associated with various metabolic side effects, including obesity and diabetes.1-4 SGAs increase risk for type 2 diabetes mellitus, and the proposed mechanism for this development centers on drug-induced weight gain. This mechanism initiates the dysmetabolic cascade of insulin resistance, increases insulin production, and causes pancreatic β cell failure. In SGA-treated patients with drug-induced weight gain, metabolic syndrome, or prediabetes, fasting hyperinsulinemia has been identified as a biomarker of insulin resistance.3,4 Conversely, few reports5-12 have shown treatment with SGAs to be associated with hypoglycemia. Complaints of hypoglycemia resemble the sedative effect of SGAs. As such, clinicians may overlook hypoglycemia in patients with psychiatric disorders. Hypoglycemia can cause seizures, permanent neurologic damage, or death and can also generate symptoms of adrenergic stimulation, such as irritability and anxiety. Recurrent hypoglycemia may lead to cognitive impairment and the onset of dementia.13

We report a case of hypoglycemia associated with hyperinsulinemia induced by quetiapine in a female patient with bipolar disorder. Relevant literature is also reviewed.

Ms A is a 62-year-old woman with no personal history of psychiatric or physical illness, including diabetes mellitus. Her family history includes a younger sister with major depressive disorder. She presented to the psychiatry clinic of a university hospital with psychiatric symptoms, including depressed mood, insomnia, appetite loss, and loss of motivation. She began to experience these symptoms at age 61 years and soon became unable to do housework. Initially, dementia was suspected, but neuroimaging and neurocognitive examination revealed no definite abnormalities. She was diagnosed with major depressive disorder (DSM-5 criteria), and duloxetine was prescribed. However, she began to complain of constipation and diarrhea. No definite abnormalities were observed during the gastrointestinal examination. However, appetite loss led to extreme emaciation, and she became unable to walk. She was subsequently admitted to the hospital.

Ms A’s fasting blood sugar level at admission was 85 mg/dL. She was initially prescribed mirtazapine 15 mg/day for her depressive symptoms. Her body mass index at admission was 11.8, but she refused to eat. Delirium soon emerged, most likely due to undernutrition, and tube feeding and quetiapine 25 mg/day were started. Laboratory data revealed hypoglycemia with no clinical symptoms immediately after prescription of quetiapine. Therefore, quetiapine was discontinued, and risperidone 0.5 mg/day was prescribed. The patient’s hypoglycemia gradually ameliorated. After 1 month, she began to eat, and tube feeding was stopped. After another month, she began to show hypomanic symptoms, such as talkativeness, mood elevation, grandiosity, and delusions of grandeur. Ms A was diagnosed with bipolar disorder (DSM-5 criteria), and, thus, mirtazapine 15 mg/day was stopped. Lithium 400 mg/day was effective in treating her mood and psychiatric symptoms, which gradually ameliorated within 4 months. Since discontinuation of quetiapine, hypoglycemia has not been observed for a year and 6 months. 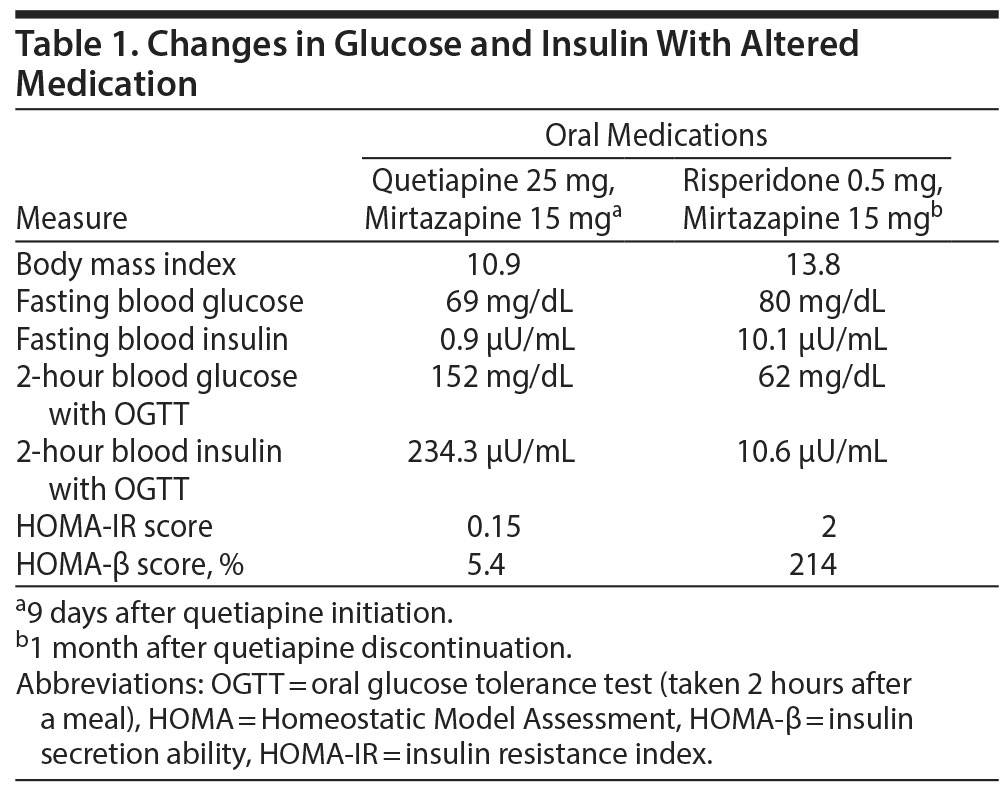 Although van Winkel and De Hert16 demonstrated that there was little evidence that SGAs induce reactive hypoglycemia, the number of reports5-12 on hypoglycemia induced by SGAs has increased. There are several hypotheses on how SGAs induce hypoglycemia.10 The secretion of insulin by pancreatic β cells might be enhanced by atypical antipsychotics and consequently cause hypoglycemia, while SGAs seem to differ in their effect on insulin release in vitro.17,18 SGAs might antagonize muscarinic receptors so that insulin secretion continues after glucose levels return to normal, leading to hypoglycemia. Some studies19 also reported that SGAs significantly reduce glucose levels through induction of insulin release, and the effects might be caused by its potent antagonistic activity against α2-adrenoceptors. Patients with severe emaciation, as seen in the present case, can easily develop hypoglycemia because of deficient stored glucose levels.9,11

Patient consent: Permission was received from the patient to publish this case, and the information was de-identified to protect anonymity.