Schizophrenia and Schizoaffective Disorders > Side Effects

To the Editor: Selective serotonin reuptake inhibitors (SSRIs) are some of the most commonly prescribed medications. Although adverse skin reactions are commonly associated with psychotropic medications,1,2 SSRIs are generally not associated with serious cutaneous side effects, and evidence of an association is limited to case reports.3,4 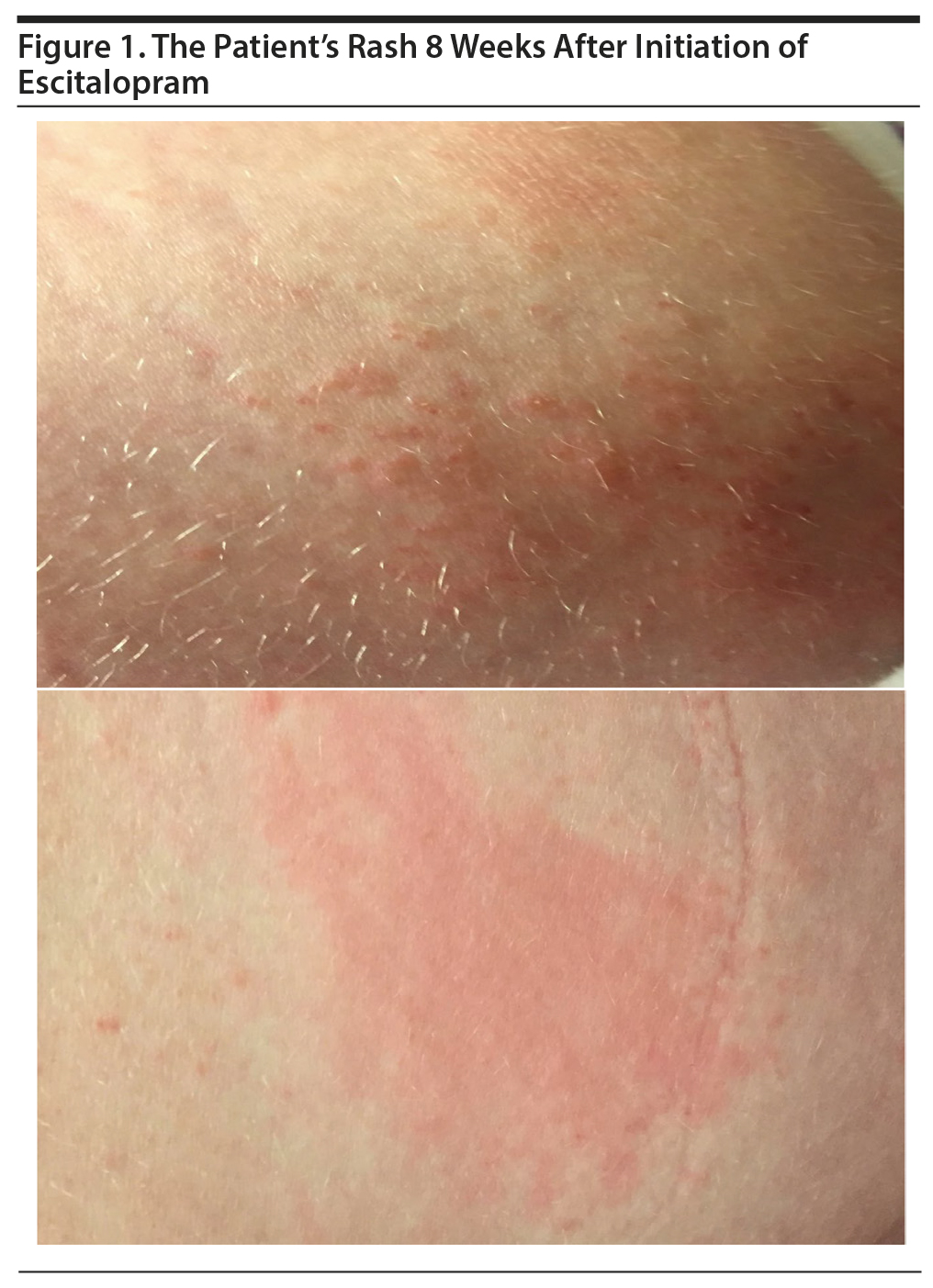 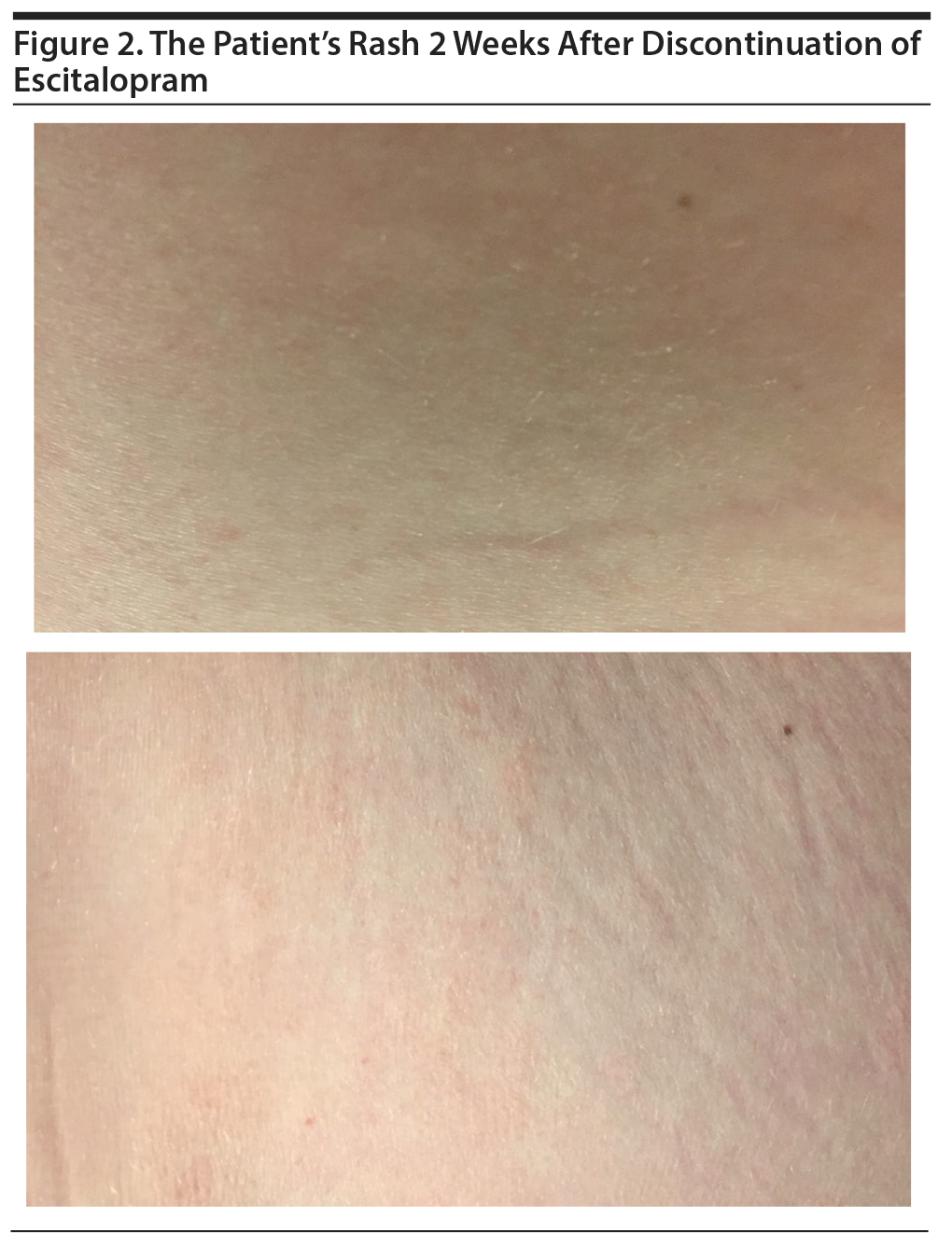 Case report. The patient is a 19-year-old woman with a history of asthma, allergic rhinitis, and Hashimoto’s thyroiditis. She was started on escitalopram 5 mg daily for symptoms of anxiety and depression. The patient had never taken antidepressants prior to the initiation of escitalopram. At baseline, the patient was taking loratadine for allergies, albuterol and budesonide/formoterol inhalers for asthma, and levothyroxine for hypothyroidism. She reported that about 4 weeks after starting the medication, a rash appeared on her right buttock and gradually spread to her lower back. The patient remained compliant with escitalopram, and at 2 months she continued to report a pruritic rash on her lower back and right buttock (Figure 1). On examination, we observed a rash with slightly elevated papules and localized erythema. No laboratory abnormalities were noted, and her thyroid-stimulating hormone level was within normal limits. Given that there were no other changes in the patient’s lifestyle or medication regimen and her preference, a decision was made to discontinue escitalopram. The patient reported resolution of the rash and associated itching 2 weeks after discontinuation of escitalopram (Figure 2). She was subsequently started on fluoxetine 10 mg and reported no reemergence of the rash.

Given the temporal association and lack of an alternative explanation, we believe that the patient’s rash was secondary to escitalopram. In animal models, SSRI-induced skin reactions, specifically itching, are thought to be mediated by 5-hydroxytryptamine receptor 7 and transient receptor potential cation channel, subfamily A, member 1 receptors.5 However, such an association has not been established in humans.

It is noteworthy that our patient has a history of asthma as well as an autoimmune disease, which may have rendered her vulnerable to skin reactions. Further, that the patient had no adverse skin reaction after being started on fluoxetine suggests that her specific skin reaction was not SSRI class dependent; this finding is different from what has been reported in the literature wherein a class-dependent effect was observed between sertraline and escitalopram.4 Some patients do experience serious skin reactions secondary to antidepressant medications, and this risk should be considered in patients who may be uniquely vulnerable. If a reaction is observed, switching to another antidepressant may be a safe option for ongoing treatment.

Patient consent: Written consent was obtained from the patient to publish this report including images. Information has been de-identified to protect anonymity.

Psychiatrist.com is published by the Physicians Postgraduate Press, Inc. The website is dedicated to providing lifelong learning for clinicians through evidence-based, peer-reviewed scientific information and clinical psychiatry news about the diagnosis and treatment of behavioral health and neuropsychiatry disorders. Psychiatrist.com also provides information for primary care physicians and other healthcare professionals who treat patients with mental and neurologic illnesses.

Articles on Psychiatrist.com are aggregated from three sources: The Journal of Clinical Psychiatry, The Primary Companion for CNS Disorders, and the CME Institute at CMEInstitute.com. The comprehensive list of topics covered by Psychiatrist.com includes studies and articles on ADHD in children and ADHD treatment for adults; psychotic schizophrenia and schizotypal personality disorder; early-onset dementia and frontotemporal dementia; manic depression and major depressive disorder (MDD); and many additional areas of research including general, functional, family, integrated, and medical psychiatry.