A Case of Olfactory Groove Meningioma Misdiagnosed as Schizophrenia

A Case of Olfactory Groove Meningioma Misdiagnosed as Schizophrenia

Olfactory groove meningiomas are relatively uncommon slow-growing tumors which can produce symptoms that progress insidiously. Often, patients present with personality changes and cognitive disturbances.1 These changes may not become apparent until the tumors become quite large,2 although other factors, eg, peritumoral edema and resultant brain tissue compression, influence clinical presentation.3 Neurologic symptoms (eg, headache, and visual and olfactory sensory changes) may occur,1 but are not inevitable; as many as 20% of patients may present with predominantly psychiatric symptoms, including affective disturbances4 and psychosis.2 We present a case of a patient with an olfactory groove meningioma who was misdiagnosed with schizophrenia.

Case report. Ms A, a 59-year-old woman, was hospitalized because of altered mental status after family members noted confusion, erratic behavior, and unusual talk about "making potions." She complained of blurred vision and visual disturbances for 1 month prior to presentation, eg, perceiving "creatures" at home.

Although she had a negative premorbid medical history, she had received outpatient psychiatric treatment for 3 years for symptoms including flat affect, avolition, decline of self-care, and disinterest in social interactions. Because of prominent negative symptoms and because she had a family history significant for schizophrenia, she had received a schizophrenia diagnosis (DSM-IV criteria) during this time. Her symptoms persisted despite her receiving fluphenazine (50 mg) depot injections intramuscularly every 14 days.

Examination revealed a thin, disheveled woman in no acute distress. Her speech was coherent, hesitant, and monotonous. Her affect was flat; form of thought was tangential. She appeared distractible, requiring an inordinate amount of time to formulate responses to inquiries. She did not endorse delusions per se, but displayed bizarre, unsystematized digressions, eg, making potions. She endorsed visual illusions but lacked frank hallucinations in any sensory modality.

Cognitive examination revealed disorientation to place and time, deficits in short-term recall and serial concentration tasks, and constructional apraxia related to visuospatial impairments. Abstract ability was concrete, and responses to hypothetical judgment scenarios were poor. Collateral information provided by family as well as the outpatient treating psychiatrist suggested that these cognitive disturbances represented a deviation from her baseline.

Laboratory investigations failed to account for the confusion. Computed tomography of the head revealed a 5-cm mass lying at the planum sphenoidale anterior to the sella turcica (see Figure 1) and extensive frontal edema. Magnetic resonance imaging confirmed a large, highly vascular, bilateral frontal lobe olfactory groove meningioma. Neurosurgical consultation was obtained, and bilateral frontal craniotomy was performed to resect the tumor. The delirium resolved; symptoms previously ascribed to schizophrenia did not reemerge during the course of 1-year follow-up. Antipsychotic medications were no longer prescribed. 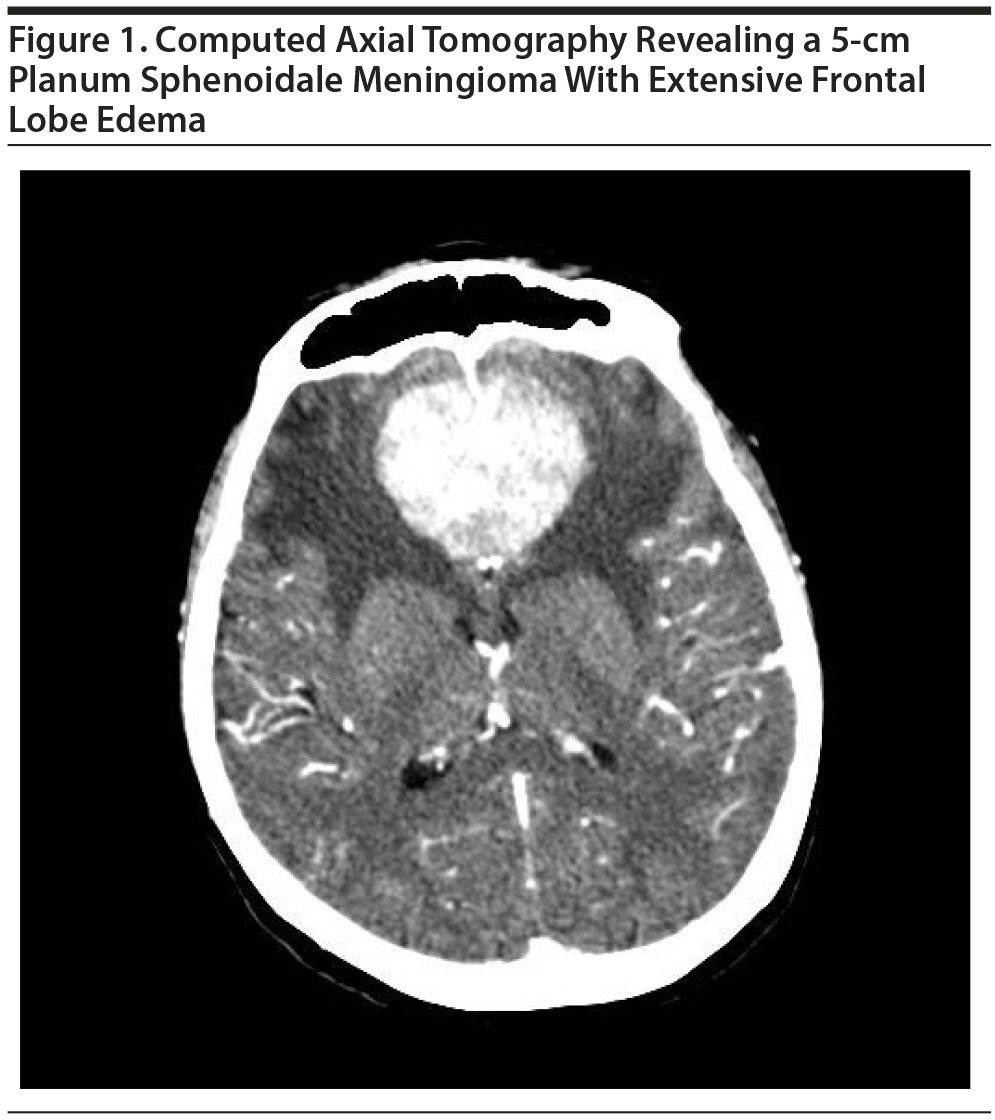 Misdiagnosis of a functional psychiatric disorder can leave a potentially treatable neurosurgical condition unrecognized and untreated2,5; a high index of suspicion is required particularly for patients presenting with late-onset symptoms, atypical symptoms, negative family history of psychiatric disturbance, focal neurologic signs, cognitive impairments, and symptoms refractory to treatment.2 Each of these features may not be present; the presence of some of these characteristics may, nonetheless, suggest the need for diagnostic assessment.

In the present case, an organic etiology was unveiled only after medical work-up for confusion was undertaken. Ms A’s outpatient psychiatric treatment providers, unduly influenced by a positive family history for schizophrenia, overlooked diagnostic imaging that could have unveiled the etiology of her symptoms. Yet, retrospectively, features of her psychiatric condition years earlier would have informed the need for assessment of neuropathology: (1) psychotic symptoms emerging outside of the usual age of vulnerability for schizophrenia; (2) the atypical nature of her symptoms, ie, affective blunting, apathy, and avolition, consistent with impairments of an individual manifesting frontal lobe dysfunction; and (3) symptom refractoriness to antipsychotic medication.

Slow-growing tumors, eg, meningiomas, can produce isolated psychiatric symptoms6; cognitive changes may not be appreciable until the tumor becomes quite large. Delusional content associated with such tumors, if present, tend to be simpler, ie, less complex or systematized, than those encountered in schizophrenia.6 Clinicians are cautioned about being swayed by a positive family psychiatric history in making a premature psychiatric diagnosis.

5. Radzik J, Zawadzka A, Leszek J, et al. The course of meningioma of the olfactory groove in a patient with a 7-year long psychiatric history: case study, and diagnostic difficulties. Psychogeriatr Pol. 2009;6(3):135-139.

aDepartment of Psychiatry, School of Medicine and Biomedical Sciences State University of New York at Buffalo