2022's Top Research in Primary Care for CNS at PCC 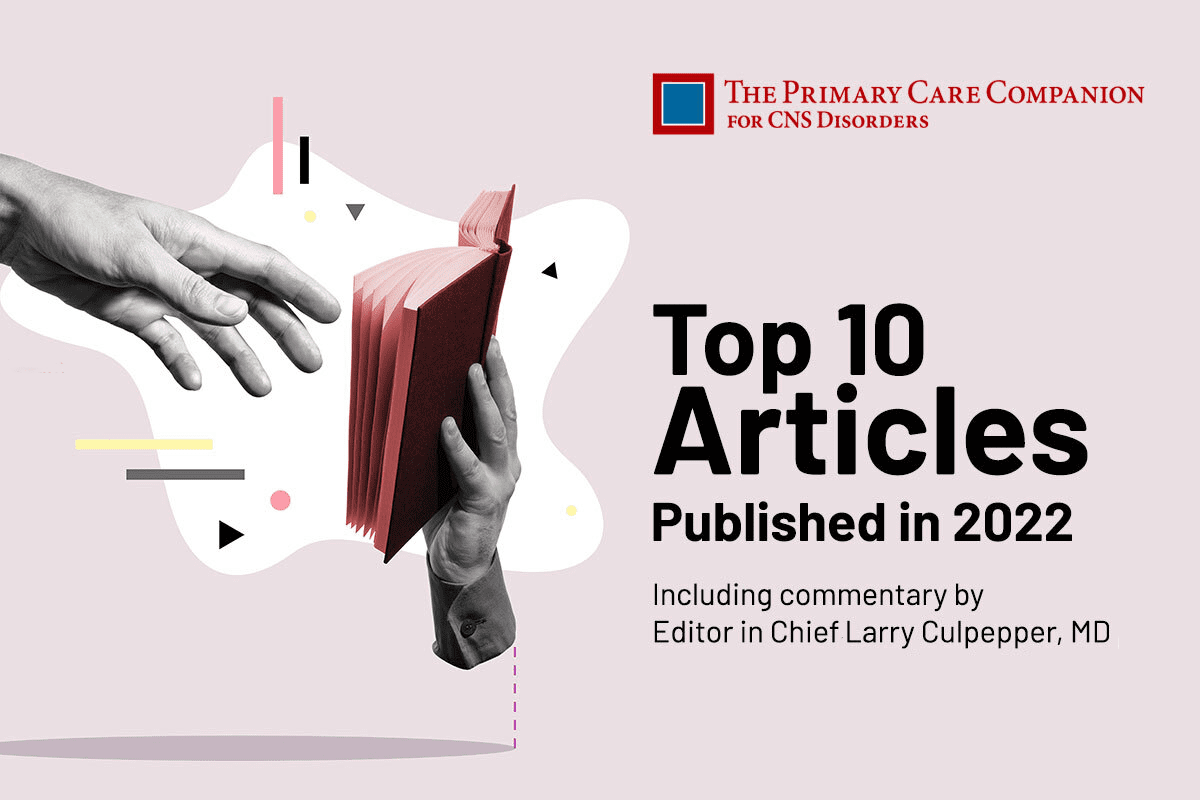 Clinical Relevance: Review the most-read PCC articles this year to enrich your knowledge of behavioral science and CNS disease

The main mission of The Primary Care Companion for CNS Disorders is to ensure clinicians working within primary care have access to the best information available in behavioral science and CNS disease.

“We also seek to reach those in specialty fields, particularly psychiatry, neurology, and any other subspecialties that interact with primary care,” said the journal’s Editor in Chief Larry Culpepper, MD.

Culpepper said that this year the journal achieved its goals by focusing on high-impact topics written by experts with diverse backgrounds from all over the world.

“Some of our articles are written by researchers while some come from authors who work in clinician practices, community hospitals, and universities,” he said. “We have a lot more coming from international settings like India and Lebanon as well, and I think that ensures that the shared knowledge really reflects the universal importance and similarities in all of primary care and behavioral health from around the world.”

Culpepper pointed out that six of the top ten most-read PCC articles this year were case studies. This doesn’t surprise him considering the universal appeal of storytelling to illustrate problems that clinicians may encounter in their own practices.

In the coming year, Culpepper said the journal will continue to bring valuable insights to its readers with a focus on ways to improve quality and impact of care.

“I think the interrelationship between behavioral science, CNS mechanisms, and other medical morbidities is an area where we certainly have a lot to offer that can help our readers gain an understanding of mechanisms and impact,” he said. “Primary care has a lot of importance because we’re caring for the whole spectrum in health. I am hoping to see more literature that reflects that.”

Review the top 10 most read PCC articles from the year here:

The first case study on our list followed a patient experiencing  premature ejaculation after being prescribed the ADHD drug atomoxetine. This should come as no surprise to clinicians as it’s a well documented side effect. However, this story was unique because the patient had no comorbid medical or psychiatric diagnosis and was not on any other medication. The frequency of spontaneous ejaculation increased with higher doses of atomoxetine, making the relationship between the drug and adverse effect more likely.

9. Long COVID in Children and Adolescents

Three years into the COVID-19 pandemic and there is still an urgent need to understand how the virus impacts the pediatric population, especially the lingering symptoms collectively known as “long COVID.” This study narrowed down 526 articles to the most relevant 48 on the topic in an attempt to identify the impairments that have the potential to affect long-term functioning and increase the overall burden on health care delivery in children and adolescents. Clinicians can earn free CME for this article in an accredited Tweetorial.

8. Association Between Problematic Social Media Use and ADHD

Problematic social media use was significantly correlated with higher odds of having ADHD in this study. Anxiety mediated this association by 26.75 percent. The reasons for this strong link seemed clear enough to the authors: social media creates a state of constant stimulation which is detrimental to focus and attention.

7. A Case of Social Anxiety Masquerading as Eating Issues

Deipnophobia is a type of social anxiety disorder characterized by anxiety while dining in public or engaging in dinner conversations. This unusual case reported on a female patient experiencing a highly selective variant of the condition which occurred only after her boyfriend finished eating and started looking at her. The underlying fears in this patient’s case were related to loss of control, embarrassment, and concern that she was being judged. Her treatment included antidepressants, propranolol, and therapy.

6. Early Improvement as a Predictor of Treatment Response in Patients With OCD

Early response can predict future response to SSRIs in obsessive compulsive disorder with a good sensitivity and specificity. That is the conclusion of a randomized, open-label prospective study of 50 drug-naive patients with OCD. A total of 60 percent of the patients showed early response at one month with a mean dose of sertraline 95 mg and fluvoxamine 102 mg/d. Both drugs demonstrated benefit, though fluvoxamine fared significantly better than sertraline.

Here, the case of a patient who developed a sedative-hypnotic use disorder to the GABA agonist phenibut and to the designer benzodiazepine bromazolam. When the patient attempted to wean himself off the drugs of his own accord, he experienced withdrawal symptoms so severe that he required hospitalization. Neither of these substances are commonly used and can be easily missed during examination. So the take home message from this report is that getting a thorough substance use history is critically important to help inform appropriate medical management.

4. Serotonin Syndrome Misdiagnosed in a Patient Who Used a Cannabis Dab Pen

A 15-year-old girl, with a history of two prior suicide attempts who was currently taking sertraline and aripiprazole daily, presented to the emergency department due to altered mental status. Eventually she admitted to inhaling a concentrated form of tetrahydrocannabinol (THC) using a “dab pen” for three consecutive days before developing symptoms. Her doctors immediately suspected serotonin syndrome since it is a well documented phenomenon in dab users; potent cannabinoid receptor agonists may activate the serotonin receptors and THC inhibits serotonin reuptake, thus increasing serotonin levels.

3. Common Methods of Suicide and Self-Inflicted Poisoning/Injury by Individuals With MDD and BPD

This nationwide inpatient analysis examined the prevalence of different methods of suicide and self-inflicted poisoning in individuals with either major depressive disorder or bipolar disorder (BD). When the Texas researchers sifted through more than 13,556 unweighted records of patients admitted to the hospital for MDD diagnosis, and 6,506 unweighted records of patients admitted for BD diagnosis, they found that suicide and self-inflicted poisoning, and injury with a cutting instrument, were commonly used in suicide tries. Both groups of patients also frequently used tranquilizers and other psychotropic agents or hanging in their suicide attempts. Restricting access to the most prevalent forms of self-injury could be a practical suicide prevention approach, the authors concluded.

A middle-aged man presented with panic disorder after receiving a second dose of a mRNA COVID-19 vaccine. This is a rare complication. And in fact, any psychiatric symptoms following a COVID vaccine are exceedingly rare in the literature. Nonetheless, clinicians should be aware that they can sometimes occur and understand how to manage them when they do.

1. Triggers and Characteristics of Brain Zaps

Brain zaps, unusual sensations that feel like the inside of the skull is pulsating, remain a barely examined and poorly understood symptom of antidepressant discontinuation. PCC’s top investigation of the year attempted to explain them more clearly by distributing an internet questionnaire to more than 3,000 people to ask about their experiences with the phenomenon. By analyzing the answers to questions about types of medications taken, the length of time these medications were taken before the onset of the zaps, zap duration, quality of sensations, and manner of onset, the researchers isolated lateral eye movement as one possible cause. This revelation opens up new avenues for further investigation and potential treatments.