Delusional infestation is characterized by the presence of a delusional idea in which the body, mainly the skin, is infested by small pathogens in absence of any medical evidence.1–6 Patients show self-destructive behaviors in effort to get rid of skin pathogens, generating excoriations, ulcerations, and secondary infections.7,8 Patients usually seek help from their general practitioner or dermatologist and as a last resort from psychiatrists.9

Apart from a primary form, delusional infestation may be associated with other psychiatric disorders (secondary functional forms), as well as medical diseases or substance abuse (secondary organic forms).10 We present a case of delusional infestation in a patient with a history of cocaine use. The disorder remitted after withdrawal of cocaine and administration of an antipsychotic agent.

A 34-year-old married female lawyer and mother of a 3-year-old girl underwent a psychiatric consultation. She reported intense itching and strange sensations under her skin in the last month. The itching had been affecting all body sites with severe scratching. Previously, a general practitioner prescribed topical antibiotics for the presence of infected lesions. She also began experiencing severe anxiety and insomnia, leading her to consult a psychiatrist.

During the assessment, the patient reported seeing small spiders at the bottom of the skin lesions. She had previously used pliers and pointed objects to remove them, deepening the lesions. Our physical examination excluded signs of infestation. She reported using cocaine for 7 years (Figure 1). The diagnosis of secondary organic delusional infestation was made according to the diagnostic criteria of Freudenmann and Lepping5 (Table 1). 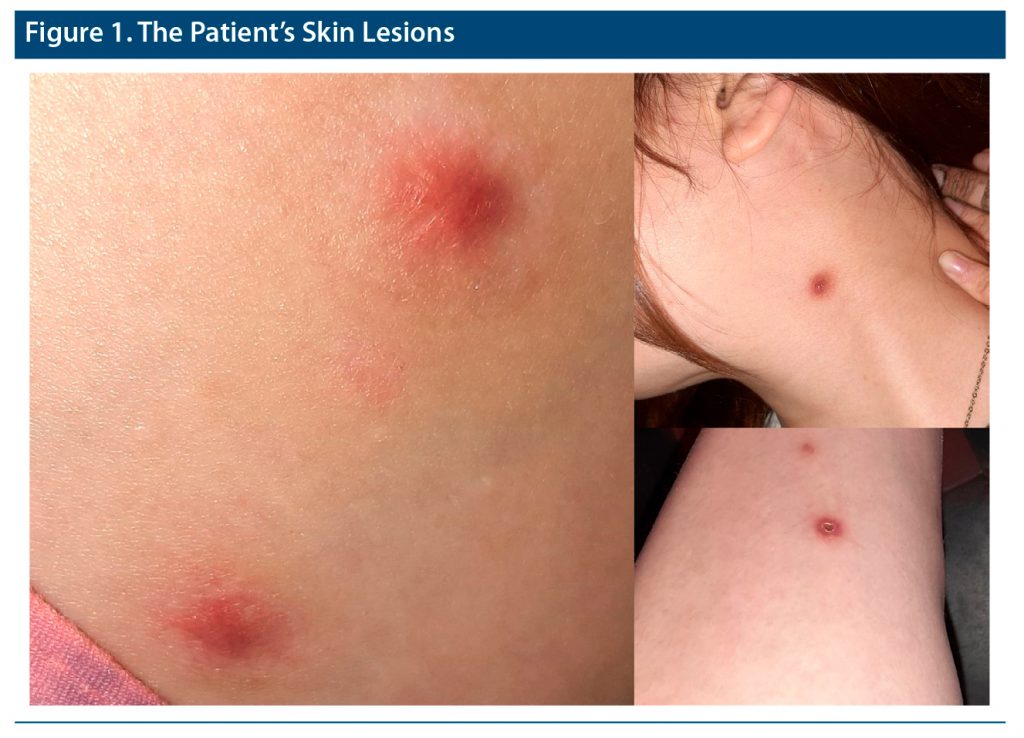 Risperidone 3 mg/d, clonazepam 2 mg/d, and hydroxyzine 50 mg 3 times/d were prescribed, the latter to reduce pruritus. Urinary toxicologic screening was positive for cocaine 1 week later, and the patient was then referred to the addiction clinic.

After a month of treatment, the patient began to question the delusional idea of ​​infestation. After 2 months, she completely denied this idea, and the lesions improved. She has been abstinent from cocaine for 3 months and is still taking risperidone 3 mg/d and receiving psychotherapy.

Delusional infestation can start with a cutaneous sensorial misinterpretation that turns into a tactile hallucination and consolidates into a delusional idea.11 It has been proposed that a dopaminergic deregulation contributes to the onset of the delusional condition in primary forms.12 Secondary forms of delusional infestation are due to a consumption of dopamine transporter inhibitors (cocaine, pemoline, bupropion, amphetamines) or to secondary dysfunctions of the dopamine transporter (traumatic brain injury, Parkinson disease, schizophrenia).13–15 The illness onset occurs between age 55 and 68 years,8,9 although it may occur in adolescents and young adults after abuse of substances such as cocaine or amphetamines.16,17 Also, cocaine may lead to vasculitis, skin infection, and formication (tactile hallucinations of insects crawling underneath the skin), possibly inducing delusional infestation and other psychosis-related dermatologic disorders.16,18

Antipsychotic treatments are recommended.7 Risperidone (1–8 mg/d) and olanzapine (5–10 mg/d) are mostly used with positive outcomes.19,20 Secondary delusional infestation treatment may also be based on the resolution of the underlying comorbid disease or substance abuse.20,21 An adjuvant psychological approach, mainly cognitive-behavioral therapy, is also recommended.22

Substance-induced delusional infestation may have an abrupt onset, and prognosis generally relies on prompt diagnosis and appropriate treatments.5 Primary care providers and dermatologists should involve mental health care professionals in the assessment of patients.1 With appropriate treatments, a good prognosis with remission has been reported in up to 75% of cases; however, cases of comorbid organic disease have shown poor outcomes.2

Published online: February 24, 2022.
Potential conflicts of interest: None.
Funding/support: None.
Patient consent: Written and informed consent was received from the patient to publish this case report, and information was de-identified to protect anonymity.