Disulfiram is the first medication approved for the treatment of alcohol use disorder (AUD). It acts on the metabolic pathway required for clearance of ethanol such that exposure to ethanol leads to accumulation of acetaldehyde, producing a disulfiram-ethanol reaction (DER) characterized by hypotension, tachycardia, vomiting, and flushing. The intensity of DER depends on the dose of disulfiram as well as the amount of alcohol consumed. Over the last 7 decades of disulfiram use, the recommended doses have decreased from 2 to 3 g to 200-300 mg due to 2 reasons. First, doses above 300 mg/day increase the chance of adverse effects, even in the absence of alcohol exposure. Second, high doses can cause DER severe enough to cause circulatory failure and death.1 Even at comparatively low doses of disulfiram, DER can cause shock and circulatory failure,2 which if untreated may cause ischemic injury to the brain, heart, and intestines.

We report 2 cases of severe DER leading to watershed area infarct in both patients and probable nonocclusive mesenteric ischemia in one. These cases emphasize the need for rigorous patient education before prescribing disulfiram.

Mr A, a 40-year-old, right-handed man, presented to a tertiary care center with complaints of acute-onset somnolence, disorientation, and slurring of speech for the last 3 days. He had no history of hypertension, diabetes, smoking, or cerebrovascular accident. His spouse reported history suggestive of moderate AUD for the last 20 years. The patient’s wife reported that 8 weeks before this presentation she administered 500 mg of disulfiram surreptitiously by mixing it in his food. She also recalled that after taking disulfiram, the patient developed mild nausea, vomiting, and dizziness following the consumption of alcohol and abstained for the next 7 days. However, Mr A relapsed to heavy alcohol use, and his wife continued disulfiram surreptitiously. Also, in the hope of improvement, she increased the dose to 1 g per day. She reported that the patient had recurrent vomiting, flushing, and dizziness but continued alcohol use despite these adverse effects. Three days before the presentation to the hospital, he consumed a large amount of alcohol and became incoherent, confused, and difficult to arouse. This state continued for the next 3 days, and no medical intervention was sought. Since the patient remained obtunded despite being abstinent from alcohol, his wife became alarmed and brought him to the hospital for treatment.

At the time of presentation, Mr A was alert but confused. On examination, he was moderately nourished (body mass index [BMI]: 24 kg/m2) and had stable vital signs (heart rate: 70 beats/minute, supine blood pressure: 140/90 mm Hg). The neurologic examination revealed aphasia. He had impairment of naming, repetition, and comprehension of compound sentences. However, he could comprehend simple commands and gestures and was extremely distressed by the deficit. The rest of the neurologic examination was unremarkable. 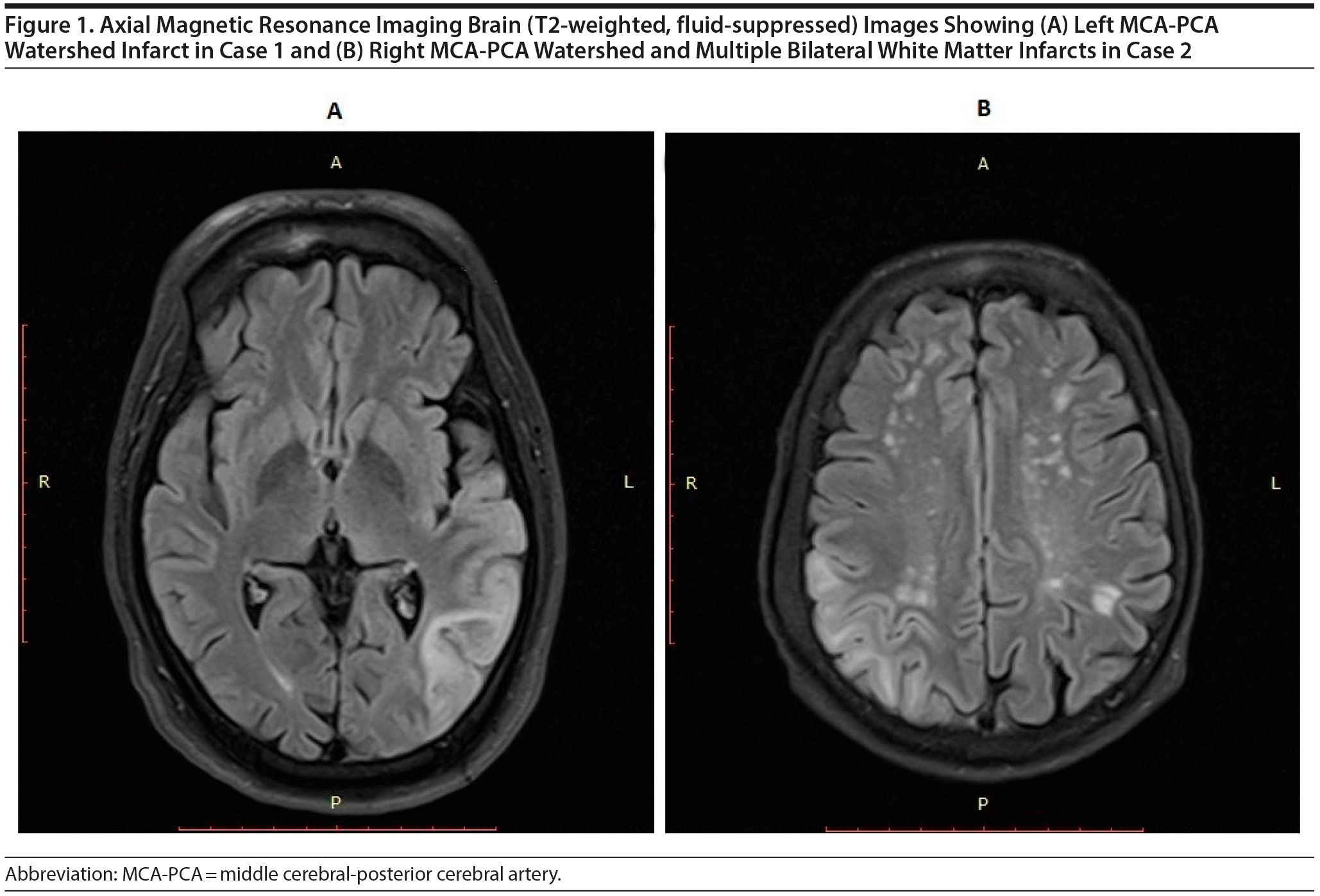 Mr B, a 58-year-old man, presented with 2 episodes of seizures, headache, gait disturbance, and problems with vision for 2 days. The patient had a history suggestive of alcohol and nicotine dependence for the last 40 years, but he did not have diabetes or hypertension. He was discharged 1 month ago from a rehabilitation center after a 3-month stay. He was receiving disulfiram 250 mg for the last 4 months. Before the current presentation, he had consumed 50-60 g of alcohol immediately followed by nausea, severe headache, blurring of vision, and loss of consciousness followed by 2 seizure episodes within 4 hours.

At the time of presentation, Mr B was found to be alert and oriented. He was moderately nourished (BMI: 19.5 kg/m2) with stable vital signs (heart rate: 70 beats/minute, supine blood pressure: 140/90 mm Hg) but had bilateral pedal edema. Neurologic examination revealed exaggerated left knee reflex and visual agnosia for objects presented in the left hemifield.

The CT scan showed right MCA-PCA territory watershed infarct with mild perilesional edema. Complete blood count, blood sugar, HbA1c, lipid profile, and renal function and liver function tests were within standard limits except for moderate hypokalemia (2.68 mmol/L) and hypoalbuminemia (serum albumin: 3 g/dL). Doppler bilateral carotid vessels and MRA were within normal limits. Echocardiography done on the third day of presentation revealed global hypokinesia, increased left ventricular cavity size, and low ejection fraction (36%), leading to a diagnosis of dilated cardiomyopathy. However, a repeat examination 1 week later revealed a reversal of all these findings with an ejection fraction of 56%, indicating reversible myocardial stunning. During treatment, Mr B developed abdominal pain, food intolerance, and loose motions, which gradually improved in 2 weeks, and he could tolerate small intermittent feeding. A contrast-enhanced CT scan was deferred because of gradual improvement and unwillingness of the family to undergo further testing.

Microembolism and low flow states are 2 distinct pathways of cerebral watershed infarcts.3 In both cases reported here, multiple paraventricular white matter infarcts (Figure 1) suggest hemodynamic impairment as the etiology of infarcts.4 Furthermore, in both instances, extensive investigations showed no evidence of the embolic phenomenon. Therefore, hypoperfusion secondary to hypotension is the most likely etiology in these patients. DER is notoriously associated with prolonged hypotension. DER is secondary to the toxic effects of acetaldehyde as well as depletion of the potent vasoconstrictor norepinephrine caused by diethyldithiocarbamate, a metabolite of disulfiram.2 In both cases, DER and symptoms of watershed infarct were temporally correlated.

DER presenting as watershed infarct is a rare phenomenon. We found 2 case reports and 1 case series (1 from Bulgaria5 and the others from India6,7) in the published literature.

Interestingly, in the second case, Mr B also had clinical features suggestive of nonocclusive mesenteric ischemia, which is seen in patients with circulatory failure.8 However, a confirmatory diagnosis could not be made in the absence of a CT scan.

This report has important implications for clinicians working in a nonregulated setting like India as well as in countries with strict guidelines for the prescription of disulfiram. Although with the availability of anticraving agents like naltrexone and acamprosate, treatment guidelines like those of the National Institute for Health and Care Excellence (NICE)9 and American Psychiatric Association10 do not recommend the use of disulfiram as a first-line treatment; both guidelines continue to support its use in selected cases. For example, the NICE guidance9 suggest increasing the dose if alcohol use continues despite supervised consumption of 200 mg of disulfiram. Given the 5 cases5-7 reported earlier and our 2 cases, we believe that prescribers must be aware of the risk of a watershed infarct in patients who may drink heavily and develop severe DER.

For treatment settings wherein guidelines do not substantially inform clinical care, this report highlights an important issue. Neither of these patients had received information about DER. In the first case, Mr A was unaware that he was receiving medicine. In the second case, Mr B and family, although aware of receiving treatment for alcohol dependence, were unaware of DER and its consequences. As a result, there was a delay in seeking medical attention after the onset of DER. Plausibly, early fluid resuscitation may have prevented irreversible damage in both cases. It is common practice in India for faith healers, pharmacists, and doctors to prescribe disulfiram surreptitiously.11 A previous study12 from our center reported the presence of disulfiram in "traditional medicine" sold to unsuspecting patients for the magical treatment of AUD. This practice can have life-threatening consequences, as reflected in this case series.

Patient consent: Consent was obtained from both patients to publish the case reports, and information has been de-identified to protect anonymity.