Psychodermatology is an emerging area in dermatology that involves the complex interaction of the skin and mind.1 Dermatitis neglecta, also known as unwashed dermatosis, is a benign condition secondary to a lack of hygiene that leads to an accumulation of sebum, sweat, and corneocytes, forming a compact and adherent crust of dirt. It presents with asymptomatic brown to black plaques and resembles dirty skin. Dermatitis neglecta is described more in the context of painful and disabling conditions, which lead to neglect of appropriate skin care. However, lesions can result from neglect due to psychiatric conditions as well.2 Little is known about this condition, and it is rarely described in the medical literature or in textbooks.

A 14-year-old boy presented to our inpatient unit with brown skin eruptions on his face. Clinically, we observed symmetrical greasy, dark-brown hyperkeratotic plaques predominantly on the nose extending to the forehead and both cheeks (Figure 1). The patient reported no pruritus and no pain associated with the eruptions. Detailed psychiatric examination revealed that he had been suffering from obsessive-compulsive disorder for many years but had not received psychiatric consultation. He exhibited excessive cleanliness with increased use of water and soap and obsessive need for the same clothes, plate, shoes, etc. If his demands were not fulfilled, he would become aggressive and assaultive. He did not touch or allow others to touch his mid facial area and would not comb his hair due to fear that the comb might touch those body parts. Despite repeated questioning, the patient did not elaborate the reason for his obsessions. As he was not concerned about the facial disfigurement, his parents made the decision to bring him to the hospital. There was no family history of any psychiatric illness. Results of the physical examination and basic investigations were within normal limits. 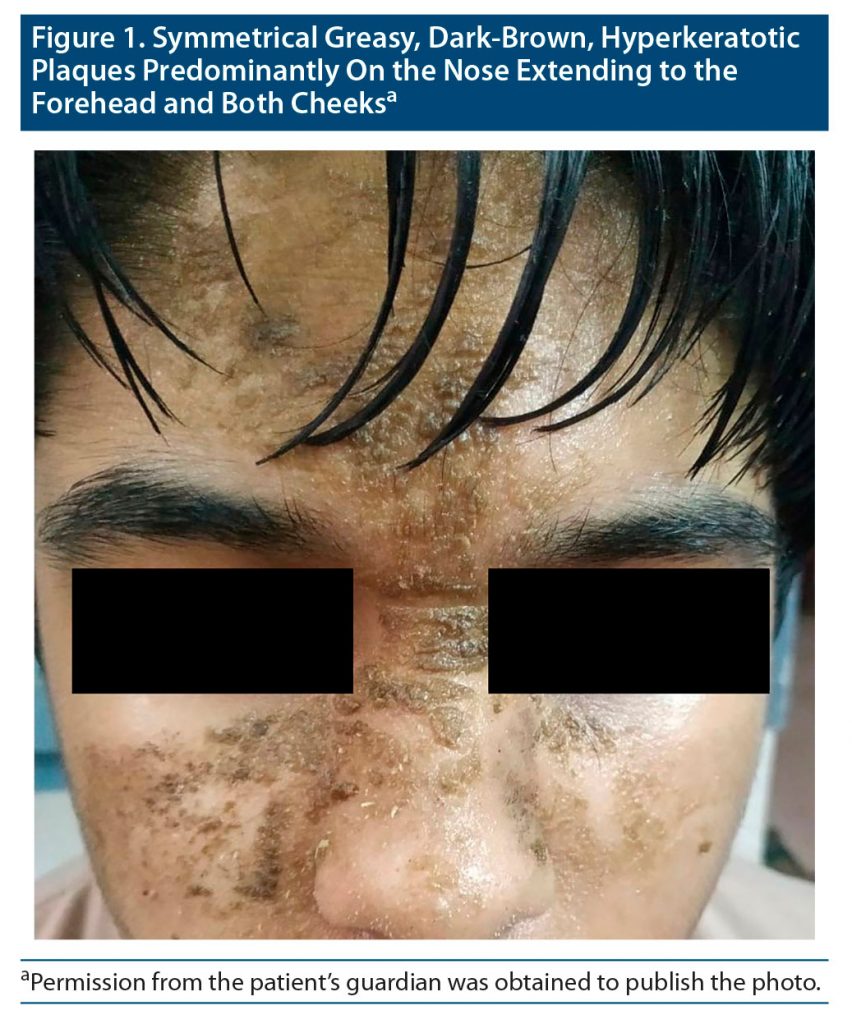 On the second day of hospitalization, he was referred for dermatologic evaluation and was diagnosed with dermatitis neglecta and was advised the skin eruptions would be rubbed with gauze immersed in 70% isopropyl alcohol. However, the patient was uncooperative for the procedure. As he was uncooperative for psychiatric evaluation and dermatologic treatment, comorbid psychotic illness was also considered, and parenteral haloperidol 10 mg plus promethazine 25 mg twice/day was given for the next 3 days followed by a gradually increasing dose of oral risperidone 6 mg, oral trihexyphenidyl 4 mg, and oral fluoxetine 60 mg by the 14th day of hospitalization. On the 21st day, the patient became cooperative and allowed the health care staff to rub the skin eruptions with alcohol, which cleared the skin lesions immediately and almost completely. However, serial mental status examinations during this period revealed no psychotic features. Considering the absence of psychotic symptoms, oral risperidone was gradually reduced. By the 28th day of hospitalization, his obsessive symptoms were also significantly reduced, and he was by himself washing face and combing his hair. On the 30th day, the patient was discharged with fluoxetine 60 mg/day, risperidone 3 mg/day, and trihexyphenidyl 2 mg/day. After 3 weeks, he presented for follow-up almost free of dermatitis neglecta symptoms with mild obsessive cleanliness symptoms (Figure 2). 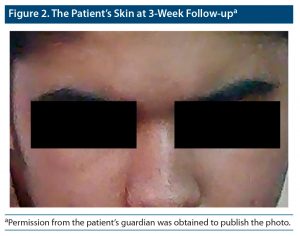 Selective poor self-care on the face due to the obsession of untouchability led to deposition of dirt, keratin, sebum, and sweat over the skin, which in turn formed crusts and scales over the skin. In many psychiatric conditions such as schizophrenia, mood disorders, mental retardation, substance use disorders, and catatonia, the individual is unable to take care of general skin hygiene due to the underlying illness and the risk for development of a cutaneous disorder like dermatitis neglecta increases. However, occurrence of this condition secondary to obsessive-compulsive disorder has never been reported.

Dermatitis neglecta was first described by Poskitt et al3 in 1995. It has no sex predilection, affects all ages, and is frequently underdiagnosed. Clinically, there are asymptomatic hyperkeratotic plaques with cornflake-like scales.4 Several differential diagnoses must be investigated, such as terra firma-forme dermatosis and dermatitis artifacta. Dermatitis artifacta may be classified as an impulsive-aggressive type of obsessive-compulsive disorder in which lesions result from self-injuries or from injuries worsened by the patient.5 Terra firma-forme dermatosis differs from dermatitis neglecta because there is no history of inadequate hygiene or response to cleansing with soap and water.6 Entities such as verrucous nevi, acanthosis nigricans, confluent and reticulate papillomatosis, and postinflammatory hyperpigmentation also have to be excluded.7 Because rubbing the affected area with gauze soaked in alcohol or soap and water leads to complete resolution of the lesions, adequate hygiene measures should be applied and are sufficient for the majority of patients.6 Other major risk factors of dermatitis neglecta include homelessness, chronic disability, and skin hypersensitivity.

After reviewing the reports2,4,8 described in the literature, we found that each case reveals different backgrounds, drawing attention to the multiplicity of lesions that this dermatosis may adopt. The majority of these cases resulted from lack of hygiene after surgical intervention or due to previous dermatosis, sunburn, or trauma.8 There are also reports in patients with psychiatric conditions, including depression and schizophrenia, or even related to religious beliefs.2,4,8 Although psychiatric conditions may present a challenge when distinguishing this condition from other entities, the diagnosis is still clinical.4 Patients should be properly counseled to maintain good personal hygiene, and keratolytics and emollients should be used judiciously when necessary.

Dermatitis neglecta is a disease that can be frequently misdiagnosed since it has many differential diagnoses. Increased awareness among clinicians and patients can reduce the rate of misdiagnosis, and proper history taking and a simple alcohol swab test can prevent invasive and expensive workup. Efforts should also be made to address the underlying cause, which in turn will be helpful for clinicians to boost the confidence of the patient regarding this harmless entity.

Published online: July 29, 2021.
Potential conflicts of interest: None.
Funding/support: None
Patient consent: Permission from the patient’s guardian was obtained to publish the case report and photos, and all information has been de-identified to protect anonymity.