Erythema multiforme is a mucocutaneous and immune-mediated disorder characterized by papules and plaques that can evolve into a target and symmetrically distributed polymorphous lesions, often accompanied by erosions mainly in the oral mucosa.1

Occasionally, erythema multiforme can be triggered by sun exposure, with lesions that converge in photoexposed areas.2,3 This is the first reported case, to our knowledge, of photodistributed erythema multiforme associated with duloxetine, a serotonin reuptake inhibitor.

A 62-year-old woman with no significant pathologic history presented for consultation with a disseminated dermatosis affecting the face on both cheeks, as well as the neck, trunk on both sides in the upper third, superior extremities on the back of the arms, and lower extremities on the thighs. Erythematous plaques were present, some with erosions and flaccid blisters (Figure 1A). Nikolsky or Asboe-Hansen signs were negative, with no mucositis. Her condition began 2 weeks prior with the diagnosis of major depressive disorder; duloxetine 60 mg orally every 24 hours was started. She denied history of depression or treatments for psychiatric conditions and had not had a similar reaction to a medication. 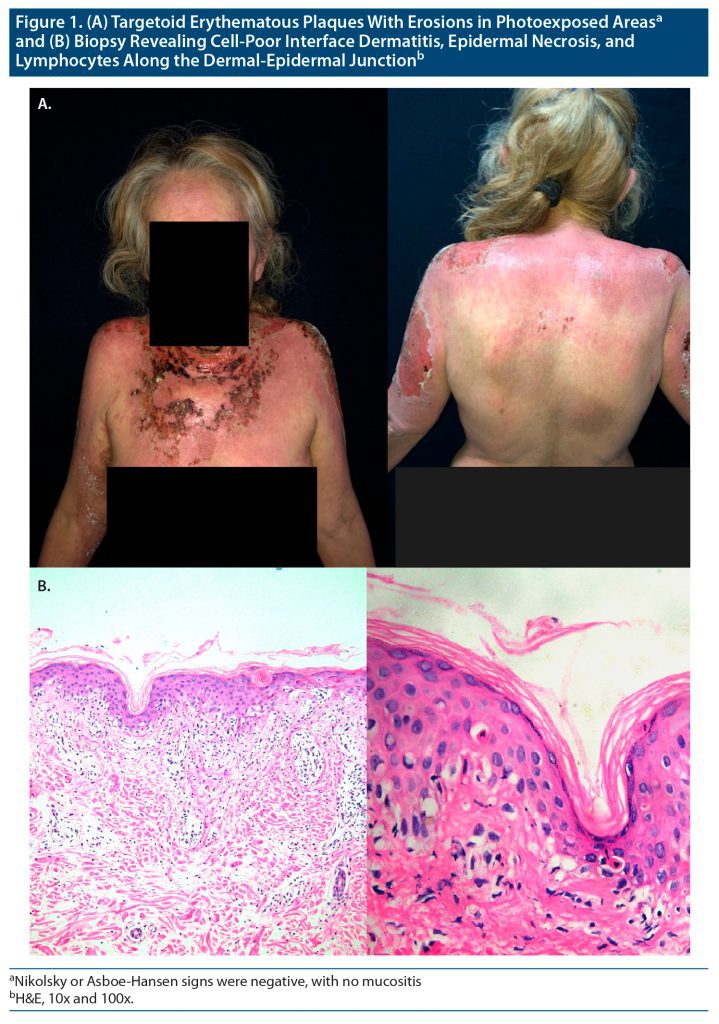 A few hours after the first intake of duloxetine, she observed a blister on the back of her right hand and rapid dissemination to the upper right limb up to the lateral face of the neck, accompanied by itching. No increase in porphyrins in blood or urine was found, and she had negative antinuclear antibodies as well as double-stranded anti-DNA antibodies. Chest x-ray showed no alterations.

A skin biopsy was performed for light microscopy and direct immunofluorescence, with foci of dyskeratotic keratinocytes, as well as vacuolization of the basal layer, confirming a diagnosis of erythema multiforme (Figure 1B). Immunofluorescence reported no IgG, IgM, or IgA deposits. The serology for HIV and the venereal disease research laboratory test were negative, as were PCR (polymerase chain reaction) results for type 1 and 2 herpes simplex virus. Duloxetine was suspended, and treatment with deflazacort 30 mg orally every 24 hours was started with clinical improvement after 2 weeks, and steroids were tapered without relapse.

Erythema multiforme is included in the photoaggravated dermatoses and can occur in the absence of ultraviolet (UV) radiation or visible light. Only some individuals will have photoinduced exacerbations, wherein the lesions will be limited to the photoexposed areas.5

Photodistributed erythema multiforme is a rare disease, described in sunburn sites after drug administration,6 along with systemic symptoms and mucositis.7 Drug reaction is probably due to a cross-hypersensitivity reaction of the skin toward multiple antigenic stimuli. The absorbed radiation can immunologically activate the drug or the drug itself can absorb photons that interact photochemically with the protein carrier to become antigenic and act as phototoxic agents, inducing cells to rupture. Furthermore, UV-induced inflammation stimulates mediators such as kinins, prostaglandins, and histamine, increasing vascular permeability, which facilitates the new antigen to enter the systemic circulation and induce the immune response in the photoexposed areas.8 Lesions can also be induced by phototest with doses of UVB and UVA. Nonetheless, as in the case of our patient, these tests are not routinely performed.

Clinically, photodistributed erythema is characterized by an erythematous macule progressing into plaques with papules and edema, developing target lesions limited to photoexposed areas. In some cases, isolated lesions may present in covered areas5 with fever and arthralgia.

The increasing use of these antidepressants has been commonly associated with drug reactions. The suspected agent should be suspended, with the addition of general and symptomatic management. Use of systemic steroids to slow the progression of the disease should be considered in each individual case.

Published online: May 5, 2022.
Relevant financial disclosure: None.
Funding/support: None.
Patient consent: Consent was received from the patient to publish the case report and photos, and information has been de-identified to protect anonymity.