Dementia with Lewy bodies (DLB) is a commonly underdiagnosed neurodegenerative disease with a known association with delusional misidentification syndromes, such as Capgras syndrome (CS), that is associated in studies1–4 with a concurrence rate between 8% and 40% in clinical cases. It is important to note that DLB rarely occurs as young-onset dementia before the age of 65 years, accounting for 4% of all patient cases.5,6 The neuropsychiatric symptoms of DLB are characterized by fluctuations in mental status, visual hallucinations, rapid eye movement sleep behavior disorder, autonomic dysfunction, and parkinsonian motor symptoms.1,7 One small study3 indicated that 81% of CS patients concurrently had a neurodegenerative disease, most frequently DLB. CS is understood to stem from disconnections in the pathway between the facial processing center in the temporal lobe and the personal/emotional stimulus centers in the limbic system8 as well as an inability to reject delusional beliefs.9 Current treatment for CS is based around the treatment of the underlying disorder.10 Some evidence suggests that patients with CS due to DLB may benefit from cholinesterase inhibitors and antipsychotics.11

Mr A is a 53-year-old Hispanic man who presented to the outpatient psychiatry department after being seen by a neurologist for a transient ischemic attack 6 months ago in the emergency department (ED). Upon outpatient presentation, he described episodes of dizziness, paranoia, and fear from feeling unsafe in his house due to rejecting that his home and family were his, insisting that they were identical imposters, all of which were concerns that his wife confirmed. He endorsed persistent visual hallucinations involving shadows taking human form and faces involving auditory hallucinations from his time in the military, which he associated with witnessed war trauma. He presented significant dysphoria and anxiety over his fluctuating condition and memory problems (Montreal Cognitive Assessment12,13 score: 16/30). Mr A displayed concern that he would be sent back to his home country to be killed despite secure immigration status.

Evaluation of the patient’s magnetic resonance image (Figure 1), which was obtained during his visit to the ED, showed multiple foci of white matter hyperintensities (increased T2 and fluid-attenuated inversion recovery white matter signal change) scattered throughout the right frontal lobe, bilateral occipital-temporal junctions, bilateral occipital horns of the lateral ventricles, and anterior margin of the body of the corpus callosum. He denied history of illicit drug use. He also reported being nonadherent to rivastigmine, citing edema and pruritus as side effects. Upon assessment, we provided psychoeducation, bilingual support for the family, and dementia resources. We initiated quetiapine, a second-generation antipsychotic with ample evidence of use in psychosis related to DLB.14–16 To further optimize his care, we used a collaborative model, consisting of a referral by a psychiatric nurse manager to a specialized cognitive neurology clinic, which coordinates with psychiatric services in the same institution. Although our psychiatric services are separate from family medicine, the psychiatrist coordinates the treatment plan with the patient’s family medicine provider through the electronic health record. 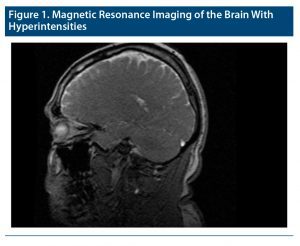 Young-onset DLB with CS presents unique challenges. Patients presenting with DLB who begin expressing signs of a misidentification disorder should be evaluated as early as possible to rule out any underlying etiology that can be effectively treated. Although posttraumatic stress disorder was considered in the differential diagnosis, Mr A denied previous history of intrusive thoughts about his trauma, reexperiencing of events, or hypervigilance prior to being seen in the ED for a possible transient ischemic attack. Usually, transient ischemic attacks are associated with non-neurodegenerative disorders and CS, occurring at a younger age3; however, Mr A’s clinical examination and documented white matter changes are consistent with dementia.

To improve care in patients with young-onset DLB dementia and CS, crisis intervention resources should be provided to the patient and caregiver since CS is associated with an increased risk for self-harm, violent behaviors, and high mortality.8,17 Collaborative care models between primary care providers, neurologists, and psychiatrists should be highly considered. Early detection of CS may also help reduce caregiver stress, thus improving both patient and caregiver outcomes.18

Published online: June 21, 2022.
Relevant financial relationships: None.
Funding/support: None.
Patient consent: Consent was obtained from the patient to publish the case report, and information was de-identified to protect patient anonymity.