If vitamin B3 was removed from our food, we would all become psychotic within 1 year because of pellagra. Pellagra is characterized by the 4 Ds: diarrhea, dermatitis, dementia, and death. The characteristic pellagrous dermatitis must be present before classical pellagra is diagnosed. The dementia of pellagra is very similar to the dementia praecox now known as schizophrenia. All these classic statements were published half a century ago,1 but should not be forgotten by clinicians, as they are still important to our daily praxis.

A 52-year-old man, living as a homeless for 2 decades, was admitted at the psychiatry emergency department for Capgras syndrome. He had a firmly held belief that his family members were killed and substituted by hermaphrodite alien doubles, assuming humanoid features.

In his clinical records, we found 5 psychiatric admissions over the last couple of years. We found information compatible with psychosis not otherwise specified, antisocial personality disorder, and drug abuse. The patient had previously been on different antipsychotics and benzodiazepines. He stayed at therapeutic communities for drug rehabilitation, but full recovery was never achieved. During his infancy, he had been a victim of child abuse, losing his left hand’s fourth finger. During adolescence, he had suffered head trauma with mild cognitive decline and had started abusing caffeine, nicotine, alcohol, cannabinoids, cocaine, and heroin. He suffered from chronic diarrhea and viral hepatitis B and C coinfection. He had been treated for luetic primary infection with benzathine benzylpenicillin. He also had been unsuccessfully treated for eczema with topical and oral corticosteroids. No psychiatric illness was known in his family.

Because of Casal necklace plus limb extremity skin lesions (Figure 1A, B, C), we suspected a diagnosis of secondary psychotic syndrome, with delusions (ICD-11 WHO 6E61.1) in dementia due to pellagra (ICD-11 WHO 6D85.8) and started treatment with oral niacin 20 mg/night, olanzapine 20 mg/night, hydroxyzine 25 mg/night, and topical lanolin, paraffin, and sunflower oil at night. Although a laboratory was unavailable with the capability of measuring the patient’s niacin levels, a fatal outcome was prevented. After 6 months of hospitalization, there was a significant remission of the patient’s dermatologic and psychiatric symptoms. He was discharged to a housing first program, with referral to dermatology and hepatology clinics. After 24 months of follow-up at the psychiatry outpatient clinic, full remission was achieved (Figure 1D). 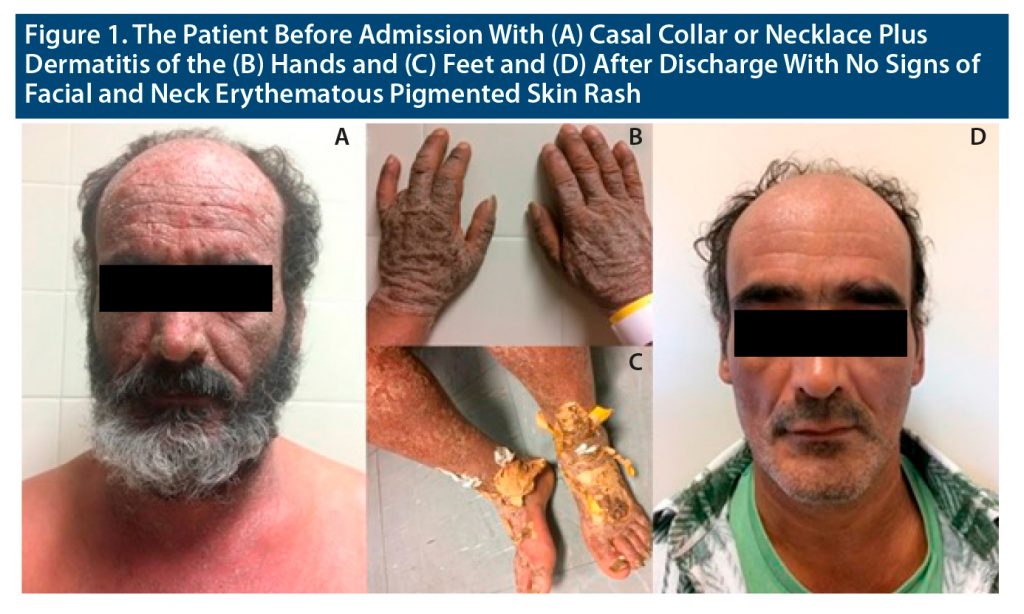 The intent of this case report is to spread a simple 3-part message: first, when treating a patient with schizophrenia-like psychosis, clinicians should take extra care on the differential diagnosis, as organic psychosis is often overlooked or underestimated, representing, in my experience, up to one-fourth of what once seemed to be schizophrenia.2 Second, there is no pathognomonic psychopathology for schizophrenia: even exquisite or bizarre phenomena such as Capgras syndrome can be found in virtually any psychiatric3 or neurologic4 condition. Third, homeless patients with schizophrenia-like psychosis still represent a true challenge to all medical specialties.5

Published online: March 10, 2022.
Potential conflict of interests: None.
Funding/support: None.
Patient consent: Written permission was obtained from the patient to publish the case report and photographs, and information was de-identified to protect anonymity.