Encephalitis is a complex and disabling neurologic disorder due to inflammation of the brain. This disorder typically presents as a subacute (up to 6 weeks) onset of altered cognition, and symptoms can include fluctuating level of consciousness, deficits in memory, seizures, and neuropsychiatric issues, which can eventually progress to coma.1 While many causes of encephalitis are infectious in etiology, there have been an increasing number of noninfectious causes of encephalitis, particularly those due to a paraneoplastic or autoimmune etiology.2 Autoimmune encephalitis (AIE) is frequently associated with antibodies against neuronal intracellular proteins, intracellular synaptic proteins, or cell-surface receptors and synaptic proteins.3 Of focus here is the antibody association with voltage-gated calcium channels (VGCCs). The N-type calcium channel antibody is not as well studied, and there is limited understanding of its clinical significance. We present the case of an elderly woman with a significantly elevated N-type VGCC antibody titer and subacute onset of confusion, visual hallucinations, paranoid delusions, and catatonia.

A 73-year-old woman with a significant past medical history of chronic back pain, hyperlipidemia, hypertension, and insomnia presented to the emergency department with confusion, fluctuating delirium, paranoid thoughts/delusions, depression, and apathy of less than 24 hours duration in December 2018. On examination, she was oriented to person, place, and time and displayed no focal neurologic deficits. She had normal sensory, motor, speech, coordination, and symmetric reflexes. Previously, the patient was in relatively excellent physiologic and cognitive health. Head computed tomography (CT) at admission was unremarkable for hemorrhage, infarction, or mass lesion. The urine assay was negative. The laboratory workup showed mild hyponatremia; however, renal function and electrolyte levels were otherwise unremarkable, and thyroid testing was within normal limits.

She was discharged home from the emergency department with instructions to follow up with the neurology department on an outpatient basis. Magnetic resonance imaging (MRI) of the brain and head was done without contrast given the lack of pathological findings on the head CT. Her MRI demonstrated mild-moderate small-vessel ischemic changes, but no atrophy or mass lesion was noted (Figure 1A). During this time, the patient vaguely endorsed a sensation of “head pounding.” Over the next week, her family noted that she developed decreased appetite, increased sleep, bizarre behaviors, and significant depressive symptoms. At her neurology appointment, her mental status examination resulted in a 19/30 on the Montreal Cognitive Assessment (MoCA)4 and a 28/30 on the Mini-Mental Status Examination.5 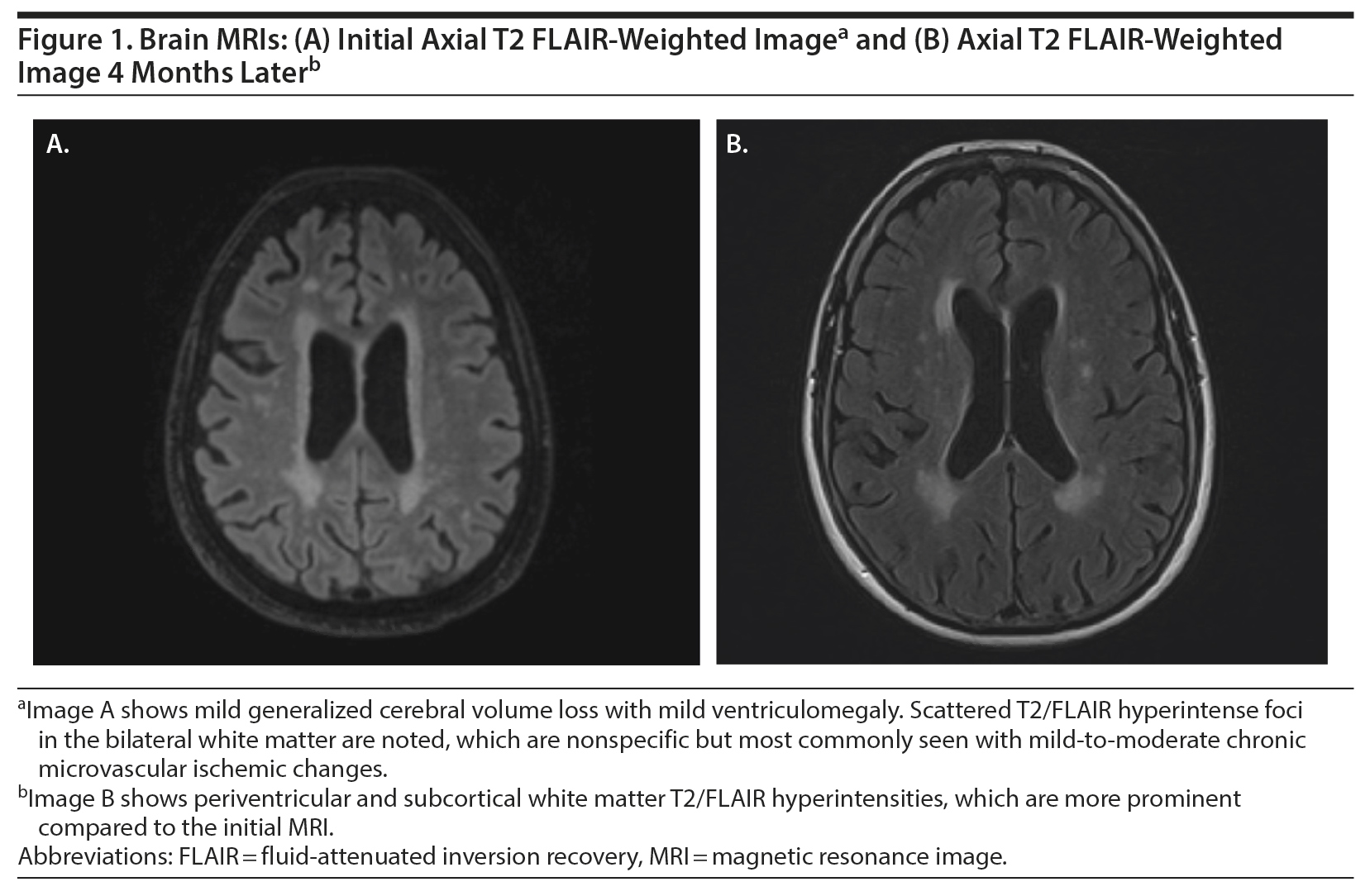 The patient was initially started on escitalopram 20 mg for suspicion of major depressive disorder with psychotic features with comorbid bereavement following the recent loss of her sister. After 2 weeks of escitalopram treatment, the patient became nonverbal and nonmotile and refused to eat, drink, or open her eyes. A blood sample was taken to assess for a possible autoimmune process given this patient’s rapid onset of psychotic symptoms and catatonia. In January 2019, a paraneoplastic panel was positive for N-type voltage-gated calcium channel antibody (0.46 nmol/L [≤ 0.03 nmol/L]).6

She was started on prednisone 60 mg 3 times daily for 30 days and received infusions of intravenous immunoglobin (IVIG) 0.4 mg/kg every other day for a total of 5 infusions, then monthly infusions of IVIG 0.4 mg/kg. Per family report, she was communicating more and smiled occasionally. In follow-up 24 days later, she endorsed dizziness since starting prednisone and continued to have delusions of persecution with visual hallucinations. She appeared very anxious, with her arms and hands shaking, and she would not open her eyes unless directly spoken to. She had no significant cognitive improvement or return to baseline personality. On repeat cognitive testing, she scored 9/30 on the MoCA, down 10 points from her testing 2 months prior.

During her progressive decline in function, she was found to have multiple pulmonary emboli after being admitted for shortness of breath and wheezing 1 month later. She was showing some improvement in cognition prior to this admission but still needed to be prompted for eating, hygiene, and other activities of daily living; however, she had no incontinence. Her laboratory values at the time were within normal limits and showed no anemia. She complained of headaches, photophobia, and vertigo; with family corroboration, she also showed increased difficulty walking, was eating too much, and had diffuse body pain and increasing confusion. Repeat CT imaging of her abdomen and pelvis demonstrated no new diagnostic abnormalities or suspicion for malignancy. Repeat brain MRI without contrast in April 2019 showed progression of cerebral volume loss and white matter disease compared to her December MRI, consistent with ongoing AIE (Figure 1B). Her cerebrospinal fluid analysis was negative for any antibodies. After stabilization of her vitals and resolution of her symptoms, she was discharged 2 days later. Since she was not responding to IVIG, she was started on rituximab 10-mg/mL infusions. Since starting rituximab, her psychiatric symptoms and cognitive functioning have improved.

Patients with AIE can present with a variety of symptoms, ranging from seizures, abnormal movements, and autonomic dysregulation to deficits in memory, behavior changes, catatonia, and psychosis. Early recognition of these patients is important, because prompt treatment with steroids and IVIG can result in a better prognosis than late treatment.1 Our patient met the diagnostic criteria for possible AIE based on the proposed guidelines2: subacute onset of altered mental status or psychiatric symptoms, MRI features suggestive of encephalitis, and reasonable exclusion of other possible causes. One type of AIE is anti—N-methyl-d-aspartate receptor (NMDAR) encephalitis, which can present with neuropsychiatric symptoms and altered level of consciousness but is more commonly associated with seizures, electroencephalogram (EEG) changes, dyskinesias, and autonomic instability.7 This type of encephalitis is frequently associated with an underlying tumor in young adults. Although this type of encephalitis does occur in older adults (aged > 45 years), it is not as often associated with an underlying tumor, and these patients have a more indolent course and a poor prognosis.8 The diagnostic criteria for probable anti-NMDAR encephalitis must include either EEG changes or cerebrospinal fluid abnormalities.7 Our patient did not have significant cerebrospinal fluid abnormalities, and an EEG was not performed given that she was not experiencing seizure activity. Confirmation of AIE can be achieved via specific antibody tests. Of note, if an antibody test comes back negative for all tested antibodies, this does not exclude an autoimmune etiology because it is possible that the antibody was not tested for.2 When the suspicion is high for autoimmune encephalitis, empiric treatment should start while awaiting antibody test results for a better outcome. The first-line treatments for autoimmune encephalitis consist of corticosteroids, IVIG, and plasma exchange.9 However, a subset of patients may remain significantly impaired despite first-line treatments. Second-line treatments involve immunotherapies that more specifically target B cells such as rituximab or cyclophosphamide. A retrospective study10 of patients with AIE with or without a confirmed antibody demonstrated rituximab’s efficacy and safety as a second-line agent for AIE.

There are 5 types of VGCC: L, P/Q, N, R, and T-type based on which tissue it is expressed in.11 VGCC antibodies are implicated in a variety of other encephalopathies, particularly paraneoplastic encephalopathies. Our patient had multiple CT scans of her abdomen, pelvis, and chest but had no discernable tumor or suspicious lesions. However, close follow-up is recommended given that encephalitis often develops before a diagnosis of cancer can be made.12 VGCC antibodies in association with small cell lung carcinoma (SCLC) can cause a paraneoplastic cerebellar degeneration syndrome. VGCC antibodies are often associated with Lambert-Eaton myasthenic syndrome (LEMS), and most patients who are positive for VGCC antibodies have SCLC.11 LEMS is a disorder of neuromuscular junction transmission, which classically presents with proximal muscle weakness, decreased tendon reflexes, and autonomic dysfunction.11 P/Q-type VGCC antibodies are found in up to 90% of patients with LEMS, but up to 39% of LEMS patients also test positive for the N-type VGCC antibody.13 However, the N-type VGCC is not as studied and is less understood when it is found alone. A review of these sporadic cases14-19 demonstrates a diverse spectrum of AIE presentations. The 6 cases reviewed describe the following patients: a 14-year-old boy with confusion, aphasia, focal seizures, and deficits in memory15; a 65-year-old woman with biopsy-proven SCLC who developed refractory generalized tonic-clonic seizures and progressive confusion18; a 37-year-old man who presented with vertigo, paranoia, tremor, and MRI findings that strongly resembled multiple sclerosis16; a 51-year-old man with new-onset seizures plus progressive and significant behavioral changes14; a 48-year-old man with refractory partial complex status epilepticus and abulia17; and a previously quiet and reserved 54-year-old man who presented with a progressive cognitive decline, frontal disinhibition symptoms, extreme emotional lability, and fluctuating catatonia.19 Our patient’s antibody titer was the highest of the reviewed cases (0.46 nmol/L) despite not having SCLC or LEMS. This finding is interesting because it is contrary to a proposed cutoff for patients with elevated N-type VGCC antibody with LEMS and SCLC (0.20 nmol/L) compared to cases with neurodegeneration or encephalopathy of other cause.20

In summary, we present the interesting case of a woman with encephalitis and predominant psychiatric symptoms with a very high titer of N-type VGCC antibodies. This case highlights the importance of broadening the differential and workup for patients with atypical presentations of psychosis. When highly suspected, empiric immunotherapy can start before confirmation for optimal management of these patients.

Acknowledgements: The authors thank Elizabeth Ann Cunningham, DO (Community Health Network, Indianapolis, Indiana), for assistance with typing the manuscript. Dr Cunningham has no conflict of interest to declare.

Patient consent: The family provided consent to publish the case report and images, and all information has been de-identified to protect anonymity.