A Very Late and Unintended “Pregnancy”: A Case of Very Late-Onset Schizophrenia-Like Psychosis

Although schizophrenia can begin at any stage of life, its usual onset is between 15 and 54 years, most commonly in the mid-20s.1 However, a considerable minority of patients first present psychiatric symptoms in old age,1 creating a diagnostic and therapeutic dilemma.2 In most cases, late-onset delusions and hallucinations tend to be associated with cognitive impairment or medical conditions.2 But, in a small portion of these cases, the origin of the psychosis is inconclusive, and when the patient is > 60 years, very late-onset schizophrenia-like psychosis is proposed as the diagnosis.3

The patient was an 80-year-old retired widow with a primary education who lived alone. She had no prior history of personal or family psychiatric or neurologic disorders and no usual psychiatric medication. She had a history of hypertension, type II diabetes, dyslipidemia, and glaucoma (all being treated with medication and stabilized).

In November 2017, she was admitted to the emergency department complaining of dyspepsia. She was observed by an internal medicine physician who ordered a complete blood count and routine urinalysis (the findings of which were unremarkable) and performed a physical examination that revealed a voluminous periumbilical hernia (confirmed by the abdominal computed tomography scan; Figure 1). When confronted with these findings, the patient denied having a hernia, saying she was pregnant instead and adding she could feel the fetal movements in her abdomen. She was sure the baby’s father was her neighbor, with whom she had never spoken, but who, according to her, would walk into her room at night and have sexual intercourse with her without anyone else noticing. She added that her neighbor would also go around the city with a megaphone, threatening and saying injurious things about her. She had never seen him doing this but was sure it was him because she could recognize his voice. A psychiatric evaluation was requested, and the mental status examination revealed the presence of somatic (of pregnancy) and persecutory delusions associated with visceral and auditory hallucinations. Her Mini-Mental State Examination4 score was within the normal range, and the brain computed tomography scan showed no major findings. She was voluntarily admitted to an acute psychiatric ward, wherein a new routine blood and urine evaluation, including thyroid function, syphilis, and HIV tests as well as folic acid and vitamin B12 levels, showed no remarkable changes. 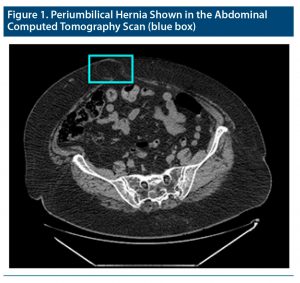 Antipsychotic treatment (risperidone 0.5 mg twice daily) was initiated and slowly titrated (until 4 mg/d), following which significant improvement was noted—first with the complete remission of the auditory hallucinations, followed by a decrease in the dynamism of the visceral hallucinations and somatic and persecutory delusions. The patient also slowly developed insight into her condition. She was discharged after 43 days with the proposed diagnosis of very late-onset schizophrenia-like psychosis, still maintaining residual persecutory delusions regarding her neighbor (without behavioral impact), and a follow-up psychogeriatric appointment was scheduled. As of October 2020, she remained stable, taking her medication as prescribed and showing no cognitive deterioration.

A wide variety of medical conditions in elderly patients can present with psychotic symptoms,5 and a thorough evaluation to exclude an underlying cause is mandatory before diagnosing very late-onset schizophrenia-like psychosis.2 It remains a controversial entity—it is unclear whether the condition is related to neurodevelopmental abnormalities or neurodegenerative mechanisms, making its follow-up absolutely imperative.3 Atypical antipsychotics are preferred so far,6,7 but additional research involving individuals with very late-onset schizophrenia-like psychosis is necessary to improve the evidence base for diagnosis and treatment.