"Hearing Voices and Seeing Sparkles": A Case of Orbitofrontal Syndrome in a 59-Year-Old Man

"Hearing Voices and Seeing Sparkles": A Case of Orbitofrontal Syndrome in a 59-Year-Old Man

To the Editor: The frontal-subcortical circuitry controls human behavior by providing a connection between the frontal lobes and their subcortical counterparts.1 Injury to any segment of the circuit can disrupt the entire pathway, producing various neuropsychiatric symptoms.1 Injury to the orbitofrontal circuit may produce behavioral disinhibition.2,3 We present a case of disinhibition and auditory-visual disturbances in a patient with frontal lobe damage, which improved after treatment with carbamazepine, phenytoin, olanzapine, and escitalopram.

Case report. Mr A, a 59-year-old white male veteran, presented to the emergency room with the complaint, "I can’ t figure it out, but something is crazy." He was reportedly sent for a psychiatric evaluation by a Veterans Affairs (VA) psychiatrist. At presentation, he reported feeling depressed for a year. In addition, he reported feeling unsafe and hearing voices stating, "Get back home, keep your mouth shut." He also claimed to be "seeing sparkle" at night. He was reportedly treated with haloperidol in the past, which was of some benefit for a short period of time. He reported that he was drinking alcohol regularly but was feeling sick with just 1 beer. He claimed that he smoked 4 to 5 marijuana joints every day. He was reportedly diagnosed with psychotic disorder secondary to head injury in 1982 and had subsequent multiple documented inpatient psychiatric hospitalizations.

Mr A was admitted to the acute inpatient unit with restriction to the unit and suicide precaution. Initially, he was started on mirtazapine 15 mg at bedtime, hydroxyzine 25 mg at bedtime, and haloperidol 2 mg at bedtime. Cogentin 0.5 mg twice/day was added for extrapyramidal symptoms. His symptoms were well controlled except for episodes of aggression lasting a few minutes approximately once or twice a day. He was receiving phenytoin 300 mg/day, which was increased to 350 mg/day, and haloperidol was increased to 4 mg at bedtime. There was no noticeable improvement in his episodes of aggressive/impulsive behavior, which continued once or twice a day. Olanzapine 5 mg at bedtime was added, and phenytoin was increased to 400 mg/day to maintain a therapeutic phenytoin level. Later, his haloperidol dose was lowered to 2 mg daily with a plan to taper him off of the drug. Attempts for care coordination with the VA medical center were unsuccessful. 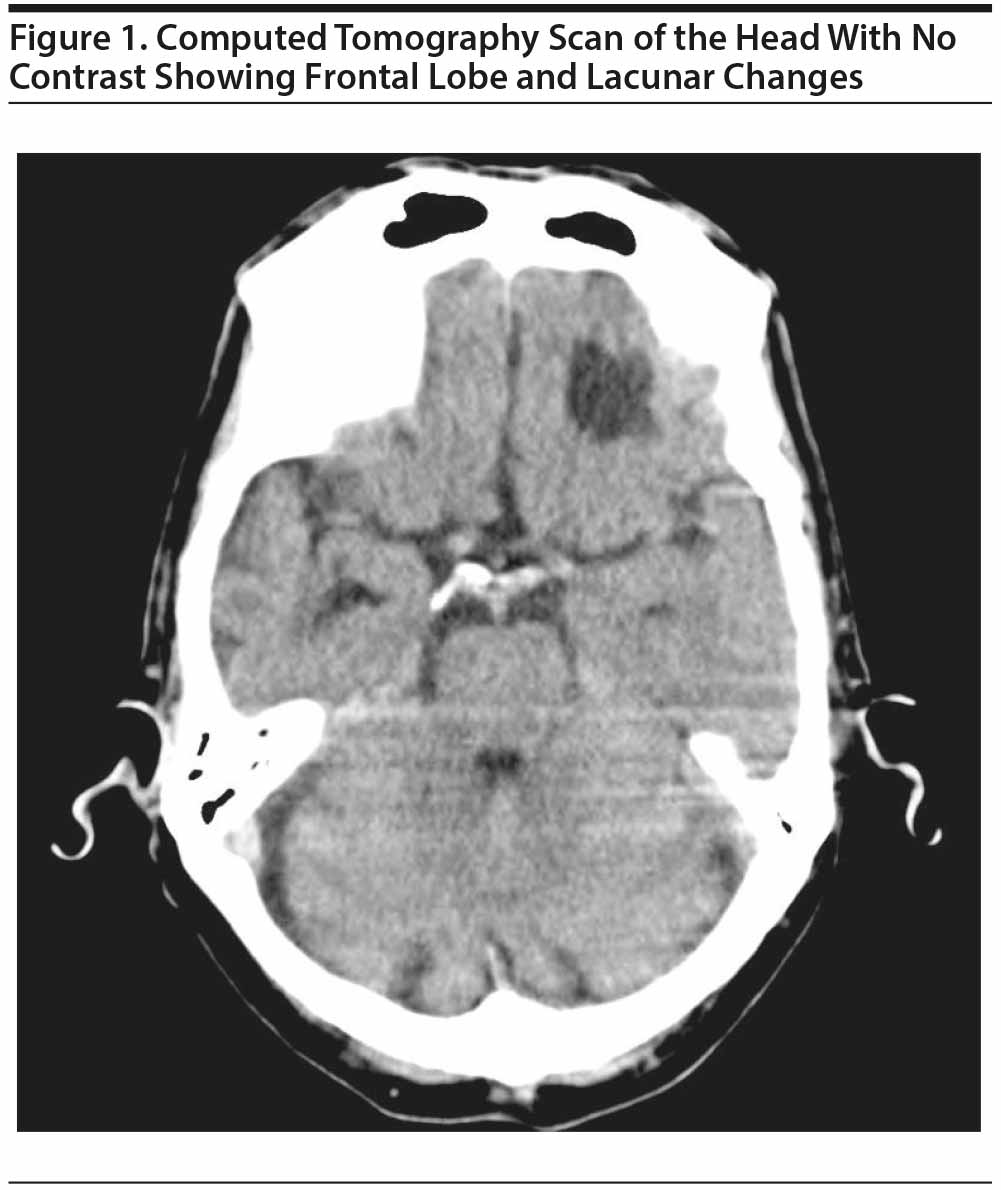 On the seventh day of admission, Mr A reported that his mood and personality changed after a motor vehicle accident in 1982. A brain computed tomography (CT) scan was ordered, and the neurology department was consulted to rule out impulsivity or seizure activity. The CT scan (Figure 1) showed changes in the frontal lobe related to his previous head injury and lacunar changes. Aspirin was added to his treatment regimen, and he was started on atenolol 25 mg twice/day for impulsivity. Mr A was started on carbamazepine 200 mg twice/day, which was subsequently increased to 300 mg twice/day, and escitalopram 10 mg/day was added.