Catatonia as Presenting Manifestation of Behavioral Frontotemporal Dementia: Insight From a PET/MRI Study

Catatonia is a frequent underrecognized symptom in the general hospital with a prevalence of 15.8% in patients admitted for medical conditions.1–3 Behavioral frontotemporal dementia (bvFTD) is a neurodegenerative disease with early and disabling changes in personality and behavior including loss of empathy and apathy. Presence of atrophy or hypometabolism of frontal and temporal regions is necessary for the diagnosis of probable bvFTD in the background of specific behavioral disturbances and functional decline.4

Symptoms of catatonia may overlap with those of bvFTD, and the diagnosis can be puzzling. Psychiatric catatonia has been misdiagnosed as bvFTD,5,6 while catatonia has been described as presentation of bvFTD.7 We report a case of bvFTD presenting with isolated, retarded catatonia and describe brain functional modifications after drug treatment investigated with 18FDG-PET/MRI (18-fluorodeoxyglucose positron emission tomography magnetic resonance imaging).

A 63-year-old man was admitted to the medical ward for stupor and marked weight loss with dehydration. The patient had a 1-year history of psychomotor retardation associated with stressful life events. Major depression had been diagnosed and treated with sertraline (75 mg/d) for 6 months with partial response. At admission, the patient had lost 30 kg (66 lb) in 6 months (body weight: 42 kg [93 lb]); he was bedridden, immobile, and mute with diffuse rigidity. At the neurologic examination, he was awake and unresponsive to stimuli with words, sounds, or movements, with no neurologic focal signs. He presented increased muscle tone of the upper and lower limbs, abnormal postures, and no repetitive or hyperkinetic movements. An extensive medical workup excluded neoplasm, metabolic/infective conditions, and autoimmune encephalitis. Brain MRI was within normal limits. Cerebrospinal fluid analysis showed normal cell count and protein level; a normal level of Aβ42 (978 pg/mL) and low levels of total-tau (118 pg/mL) and phosphorylated-tau (27 pg/mL) ruled out the diagnosis of Alzheimer’s disease. A first 18FDG-PET/MRI showed hypometabolism in the left prefrontal, temporal, and parietal cortex (Supplementary Figure 1). He was moved to the psychiatric ward with a diagnosis of catatonia. He scored 33 on the Hamilton Depression Rating Scale (HDRS),8 53 on the Montgomery-Asberg Depression Rating Scale (MADRS),9 and 24 on the Bush-Francis Catatonia Rating Scale-Severity (BFCRS-S).10 He was started on lorazepam, given orally up to 5 mg daily combined with venlafaxine extended release (titrated to 375 mg/d). He gradually restarted eating and walking; his speech became telegraphic and progressively more fluent. One-month later, his HDRS score was 18, MADRS score was 25, BFCRS-S score was 6, and MMSE score was 12/30. After 1 month, he was discharged with no catatonic symptoms (BFCRS-S = 0) and presence of mild depression (HDRS = 8, MADRS = 8). He presented with improvement on the MMSE (21/30) with persistent executive and episodic memory deficits. A second 18FDG-PET/MRI, performed 8 months after the first scan and 6 months after hospital discharge, showed persistent hypometabolism in the left temporal and parietal cortices and increased cortical metabolism in all other cortical areas, mainly the frontal lobe (Figure 1). After 36-month follow-up, his MMSE score decreased to 14/30 with progressive frontal lobe dysfunction and decreased functional independence. A diagnosis of probable bvFTD presenting with major depression and catatonia was made. Genetic analysis for C9orf72 expansion was negative. 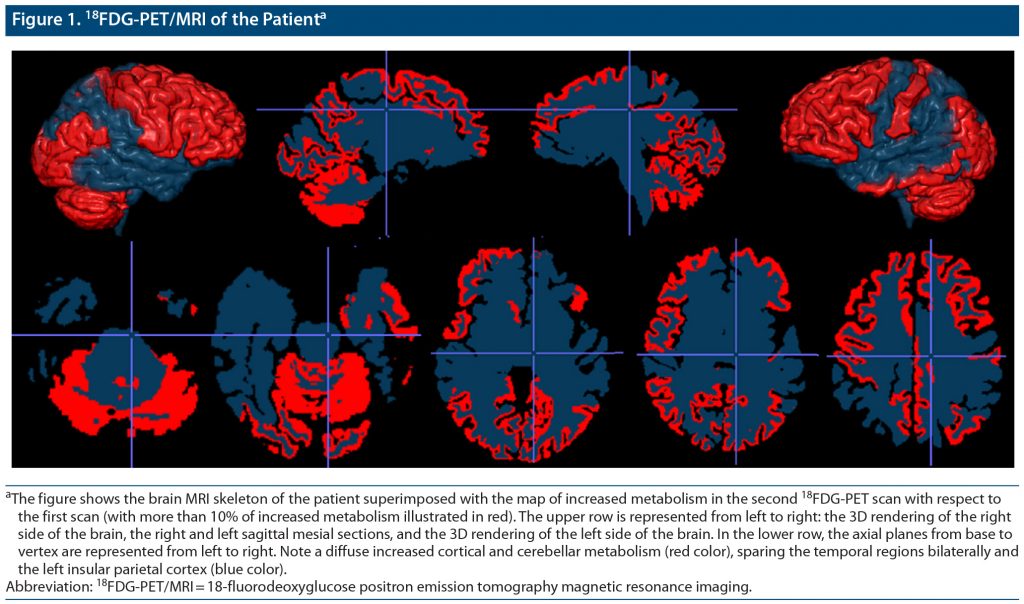 Catatonia is characterized by the inability to transform emotional data. Its neuroanatomical correlates have been poorly investigated. Frontal hypometabolism/hypoperfusion, potentially reversible after treatment, has been described in retarded catatonia.11 We reported findings from repeated FDG-PET/MRI revealing (1) a diffuse cortical and cerebellar increase of glucose metabolism after resolution of catatonia, mainly in the frontal lobe where it reached an increase of 50% with respect to the first scan and (2) persistent left temporoparietal hypometabolism. These findings suggest that transient cortical hypometabolism mainly in the frontal lobe was associated with the catatonia manifestation and support a diagnosis of neurodegenerative disease by confirming a stable decrease of temporal lobe metabolism. Longitudinal functional neuroimaging study may help in detecting a neurodegenerative condition underlying catatonia.

Published online: April 15, 2021.
Potential conflicts of interest: None.
Funding/support: Dr Bussè received a grant from the Associazione Italiana Ricerca Alzheimer Onlus (AIRAlzh) funded by Consorzio Nazionale delle Cooperative di Consumatori (COOP ITALIA S.C.). Drs Pompanin, Pigato, Roiter, Cecchin, and Cagnin report no conflicts of interest related to the subject of this report.
Role of the sponsor: The sponsor had no direct role in any part of the study.  Dr Bussè collected data and revised the manuscript.
Patient consent: The patient provided consent to publish the case report, and information has been de-identified to protect anonymity.
Supplementary material: See accompanying pages.