Delusional parasitosis (DP) is an uncommon syndrome characterized by a delusion of infestation.1 DP can be classified as primary or secondary.2 The primary form corresponds to the somatic type of delusional disorder (DSM-5). The secondary type results from another disorder (psychiatric, medical, or drug related).2

We report a case of a DP due to a mild neurocognitive disorder (mND) (DSM-5) to highlight its rarity, the nature of its presentation, and the proper therapeutic approach.

Ms A, a 77-year-old single, retired woman with a primary education, had a history of hypertension and dyslipidemia (both being treated with medication) and also had bilateral sensorineural hearing loss. No history of personal or family psychiatric or neurologic disorders was reported.

In February 2019, she was admitted to the emergency department and was observed by a dermatologist due to pruritus with 8 months’ duration. The skin examination revealed itch marks and skin excoriations in the limbs, head, and back. Findings of routine blood and urine analysis were unremarkable. No signs of a dermatologic disorder were documented, and the patient was refered for psychiatric observation. The mental status examination revealed recurrent skin-picking behavior associated with anxiety and repeated unsuccessful attempts to decrease this behavior. The patient was discharged with a provisional diagnosis of skin-picking disorder (DSM-5) and medicated with fluoxetine 20 mg/d and bromazepam 1.5 mg/d.

Upon reevaluation after 2 weeks, Ms A’s anxiety remitted, but the pattern of skin picking had only slightly improved. She admitted that skin picking was an attempt to catch small white worms under her skin. Additionally, despite the absence of limitations on activities of daily living, the patient and her family reported apathy and memory and attention complaints. Physical and neurologic examination revealed no other abnormalities. Routine blood and urine evaluation, thyroid function, syphilis and HIV tests, and vitamin B12 and folic acid dosage showed no remarkable alterations. Brain computed tomography revealed relevant periventricular and subcortical white matter lesions due to microvascular ischemic disease as well as left frontotemporoparietal and posterior cingulate cortical atrophy. A neuropsychological assessment showed moderate deficits in executive functions and visuospatial processing and mild deficits in episodic and visual short-term memory.

Ms A was subsequently diagnosed with DP secondary to mND due to multiple etiologies (DSM-5). She was advised to keep strict control of cardiovascular risk factors. Risperidone was initiated and titrated up to 1.5 mg/d. Psychotic symptoms and skin picking remitted in 2 weeks. Itch marks and skin excoriations in the limbs and head are now completely healed, and the back skin lesions are almost healed (Figure 1). 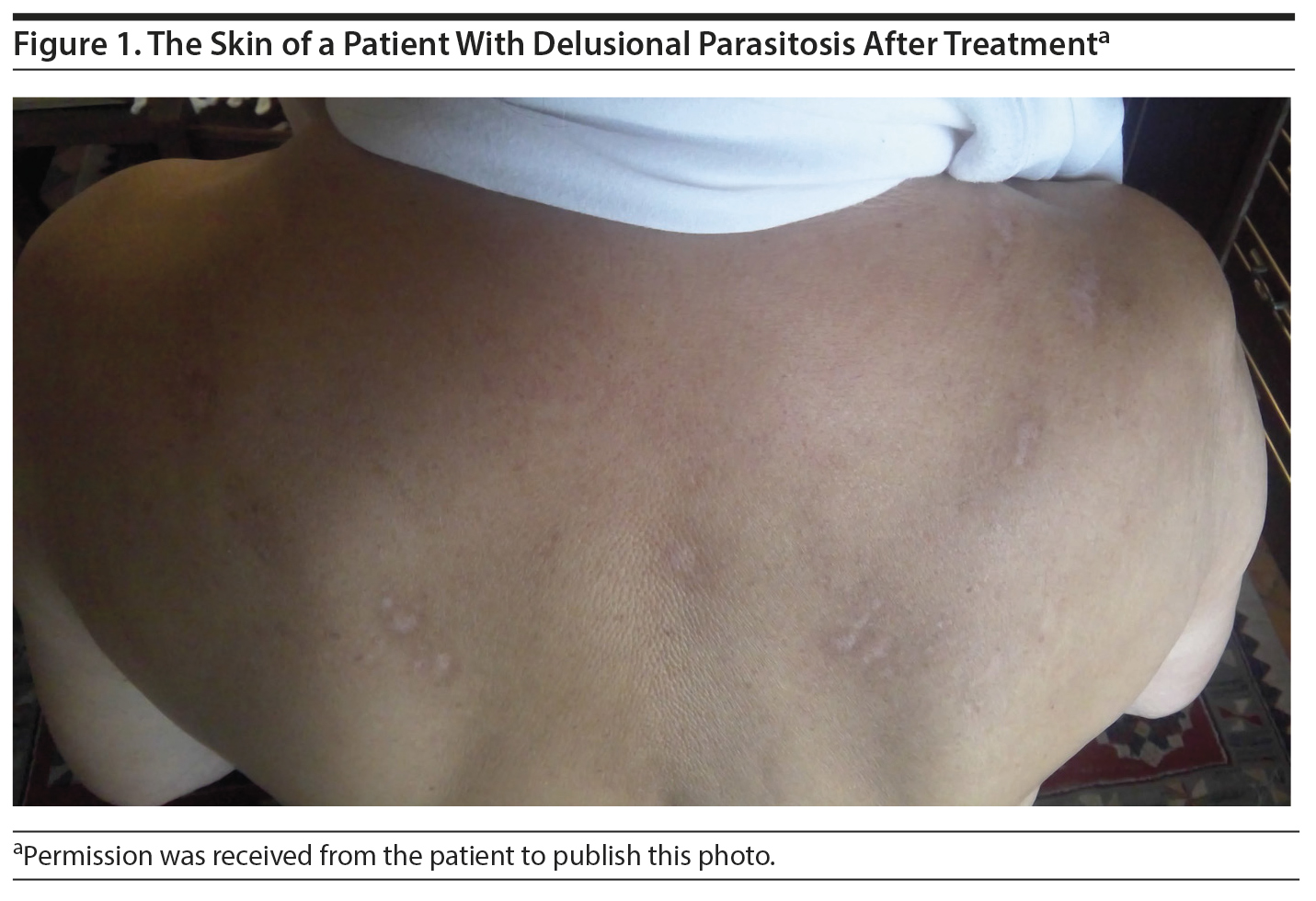 This case report shares important features with the few reported cases of DP,3 namely female sex1 and the insidious and late age at onset.4,5

Since DP can be either primary or secondary, a detailed medical investigation was performed. Mild or major neurocognitive disorders are possible secondary causes of DP, particularly in older patients.2 Since there are no approved pharmacologic treatments for mND,6 only control of cardiovascular risk factors was proposed.

Regarding the pathophysiology of DP, the deterioration of striatal dopamine transporter functioning was hypothesized to be associated with both forms of delusional parasitosis.7 Other authors3 argue that the delusion may result from an age-dependent increase in central paresthesias or from dermal changes, leading to a delusional misunderstanding of somatic sensations.

The preferred treatment for psychotic symptoms, either primary or secondary, is a second-generation antipsychotic (SGA),3,8,9 particularly risperidone or olanzapine.8 Generally, patients’ ability to function is not inhibited by the psychotic symptoms,1 but the prognosis will depend on the potential progression of mND.

In conclusion, DP is a heterogeneous condition that often presents to a nonpsychiatric medical professional. Early recognition by general physicians and dermatologists and proper treatment are of paramount importance. Moreover, in older patients, DP could be a marker of cognitive impairment. Further investigation is necessary to clarify the neurobiological mechanisms of this disorder.

Patient consent: The authors received consent from the patient to publish the report and the photograph, and the information has been de-identified to protect anonymity.