Intracranial Hypertension as the Primary Symptom of Adenocarcinoma of the Lung

Idiopathic intracranial hypertension (IIH) is characterized by increased intracranial pressure with no radiologic findings of tumor or cerebral edema.1 IIH can present clinically with the following symptoms: headache, nausea, vomiting, diplopia, progressive vision loss, and papilledema.1 In a minority of cases, IIH can lead to death due to cerebral herniation.

Cancer patients often present to physicians with symptoms unrelated to their primary cancer. In many patients, such unrelated symptoms could be the only presenting symptom when they seek help for the first time. Many such symptoms result from an abnormal immune system response to the cancerous growth. Such complications of cancer, which cannot be attributed to direct effects of the neoplasm or its metastases, are called paraneoplastic syndromes.2 Paraneoplastic syndromes associated with lung cancer can affect multiple organ systems in the human body, including the nervous system. Paraneoplastic neurologic disorders are rarely reported in lung cancer and are mainly found among patients with small cell lung carcinoma.3 Paraneoplastic syndrome presenting with IIH is relatively rare. IIH has been reported in acute promyelocytic leukemia, duodenal cancer, and gastric signet ring cell carcinoma.1,4,5 There are no reports of IIH presenting as a paraneoplastic syndrome among patients with carcinoma of the lung.

A 45-year-old male farmer who was an ex-smoker presented to the emergency department of our hospital with complaints of headache and projectile vomiting of 3-week duration and occasional diplopia while looking sideways for 2 weeks. His headache was holocranial, pulsatile, and throbbing, and he had occasional thunderclap episodes. Headache was also associated with photophobia, phonophobia, and occasional giddiness and was not relieved with analgesic medications. The headache was aggravated when leaning forward and at nighttime, which disturbed his sleep. There was no history of rhinorrhea, lacrimation, fever, skin rashes, or respiratory illness. There was associated weight loss (4 to 5 kg in the last 6 months) despite a good appetite. There was no history of sensory/motor symptoms, altered sensorium, tinnitus, or recent travel.

He presented to our hospital with persistent symptoms after extensive evaluation at another facility. His routine blood investigations were within normal limits. Magnetic resonance imaging (MRI) of the brain and magnetic resonance angiography results were also normal. A cerebral spinal fluid (CSF) study conducted previously was normal except for raised intracranial pressure. The CSF culture was sterile. The CSF study for India ink, Gene Xpert, cryptococcal antigen, and acid-fast bacillus was negative.

His physical and neurologic examination revealed bilateral lateral rectus palsy with mild ptosis in his left eye. Fundus examination showed grade 3 papilledema in the right eye and grade 5 papilledema in the left eye (Figure 1). The CSF study was repeated, which showed opening pressure of 26 mm of water with normal counts and protein. Cytology was negative. The CT thorax showed linear soft tissue in the anterior segment of the left upper lobe, with focal mediastinal infiltration, which was suspicious for malignancy with few pleural plaques in the left basal segmental region and mildly prominent left supraclavicular lymph nodes. Bronchoscopy was normal. Endobronchial ultrasound–guided fine-needle aspiration was done (Figure 2), which showed features suggestive of non–small cell lung carcinoma, adenocarcinoma of the lung. A repeat MRI of the brain was normal. A positron emission tomography CT scan showed intensely fluorodeoxyglucose (FDG) avid mediastinal pleural-based lesions in the anterior segment of the left upper lobe of the lung and FDG avid left supraclavicular and mediastinal lymph nodes, pleural nodular thickening, and sclerotic skeletal lesions in the bilateral pelvic bones, sacrum, and few dorso-lumbar vertebrae. The patient was referred to the oncology center for further treatment. He received 6 cycles of chemotherapy with pemetrexed and carboplatin and was on maintenance pemetrexed at the time of this writing. A repeat MRI was within normal limits, and there were no features of raised intracranial pressure. 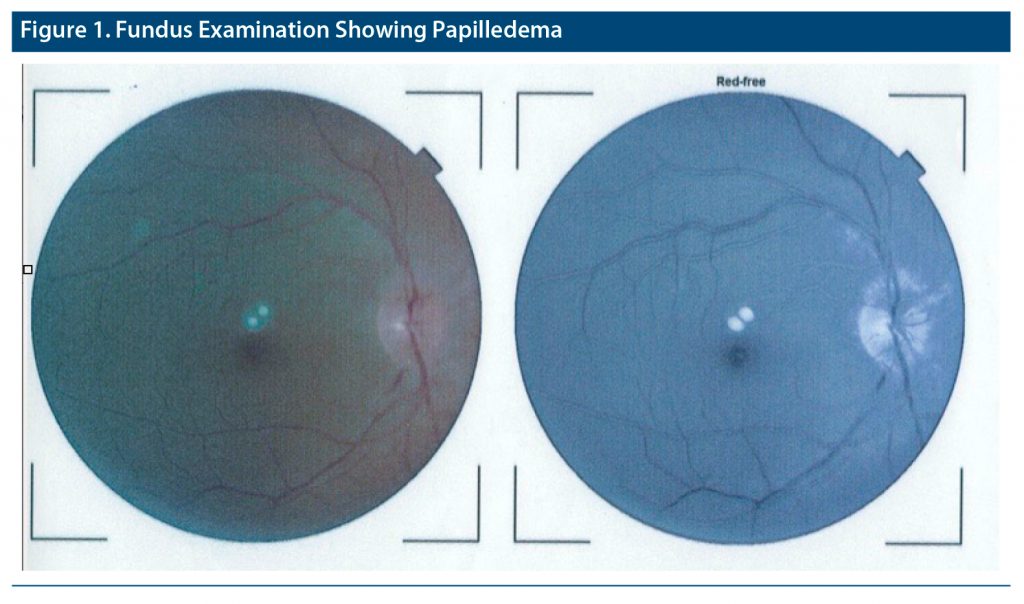 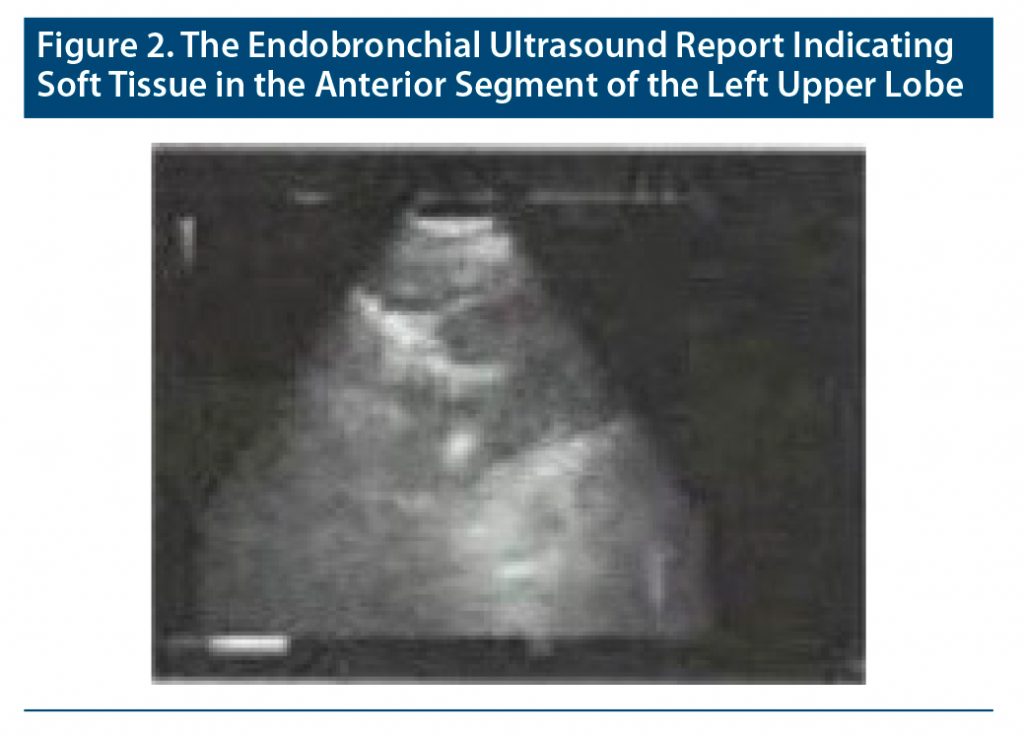 Lung cancer contributes to the majority of deaths worldwide due to cancer.6 Lung cancer is the most common cancer in Indian males, and the most common subtype is adenocarcinoma.7 Despite the high prevalence, adenocarcinoma of the lung is diagnosed very late in an advanced stage (stage IIIb and IV) among > 70% of patients.7 The diagnostic delay is attributed to patient-related factors (delay in seeking medical help), clinician-related factors (lower level of diagnostic suspicion, especially if the patient is younger), and uncommon presentation. A study6 showed that up to 6.5% of patients with lung cancer had no symptoms indicative of lung cancer at the time of their diagnosis. Although adenocarcinoma of the lung can present with a variety of clinical symptoms, including headache and vomiting secondary to brain metastasis, the primary presentation as IIH is not yet reported.

The diagnosis of IIH in our patient was made by modified Dandy criteria, which includes signs and symptoms of increased intracranial pressure; no localizing neurologic signs, except unilateral or bilateral sixth nerve paresis; CSF opening pressure ≥ 25 cm of water without cytologic or chemical abnormalities; and normal brain imaging findings.8 Our patient met all the criteria for the diagnosis of IIH. The pathophysiology of IIH in our patient is not fully clear. The proposed mechanisms of IIH include increased brain water content, excess CSF production, reduced CSF absorption, and increased cerebral venous pressure.8 One potential differential diagnosis in our patient could be that it resulted from the direct spread of tumor cells through the CSF space (carcinomatous meningitis). Adenocarcinoma of the lung is a highly malignant neoplasm that often metastasizes to organs including the brain through hematologic spread.9 However, repeated brain MRI and CSF cytology showed no features suggestive of carcinomatous meningitis in our patient.

This case of adenocarcinoma of the lung presenting as IIH highlights the significance of keeping malignancy in the differential diagnosis while evaluating patients with IIH.

Published online: October 18, 2022.
Relevant financial relationships: None.
Funding/support: None.
Patient consent: Consent was received from the patient to publish the case report, and information has been de-identified to protect anonymity.