A 41-year-old woman had experienced left trigeminal neuralgia for 6 years. She had also suffered from depression for a couple of years and was treated with escitalopram 20 mg/d and trazodone 12.5 mg/d. Her mother had a history of depression, and her cousin committed suicide. Her symptoms of trigeminal neuralgia were well controlled with carbamazepine; however, they gradually became difficult to control with the medication. She thus underwent microvascular decompression for left trigeminal neuralgia. Auditory hallucinations such as hearing men and women talking to her appeared on the day after the operation. She was suspected to have delirium after surgery and was thus consulted by the department of psychiatry. The psychiatrists observed no disturbance of consciousness, which was supported by normal electroencephalogram findings. The patient had insight into her psychiatric symptoms and agreed to treatment. She was tentatively diagnosed with acute transient psychotic disorder or schizophrenia according to the DSM-5. Aripiprazole 12 mg/d and quetiapine 25 mg/d in addition to carbamazepine were prescribed for her psychiatric symptoms.

Four days later, she was admitted to the hospital’s psychiatry department. After admission, the dose of aripiprazole was increased to 24 mg/d, but the hallucinations continued. Head magnetic resonance imaging (MRI) 2 weeks after the operation revealed a small amount of fluid pooled outside the dura mater under the opening in the skull, and T2-weighted and fluid-attenuated inversion recovery images showed the presence of a region of high signal intensity in the left cerebellar hemisphere immediately below the dura mater under the opening in the skull (Figure 1). Since akathisia symptoms were observed, aripiprazole 24 mg/d was changed to brexpiprazole 2 mg/d. Thereafter, her auditory hallucinations gradually ameliorated, and the auditory hallucinations disappeared about 2 weeks after admission to the psychiatry department. The previously mentioned abnormal MRI findings were also improved at that time (Figure 2). Ten days later, she was discharged from the hospital. There has been no relapse of psychiatric symptoms with the prescription of brexpiprazole 2 mg/d for 4 months at the time of this writing. 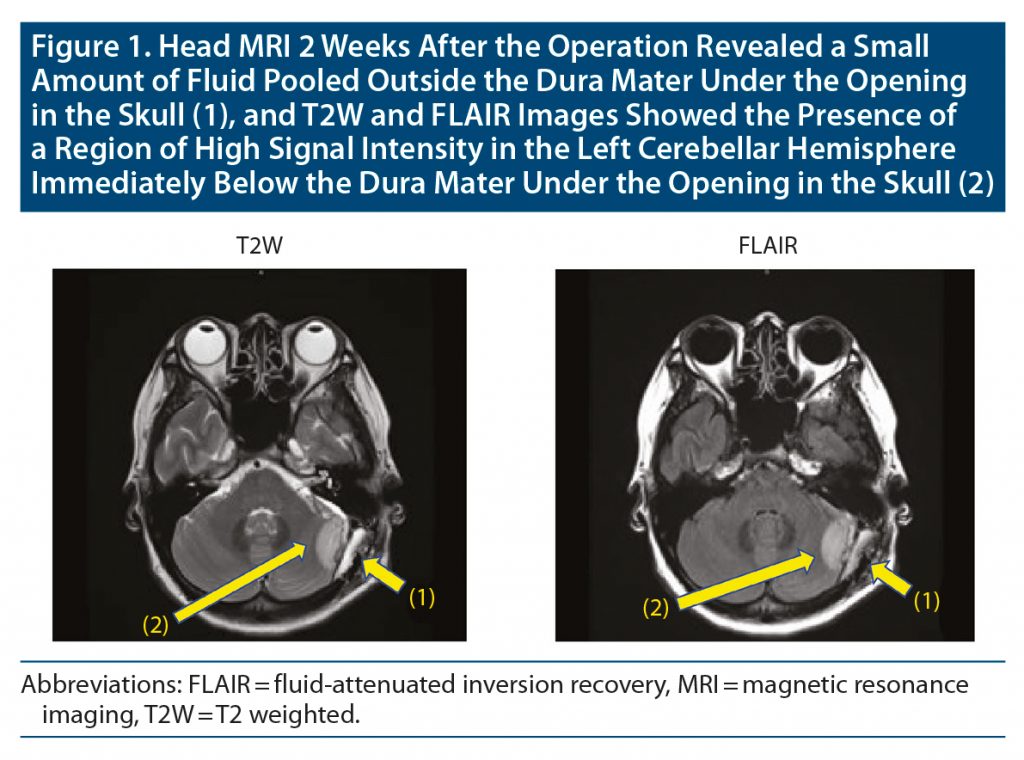 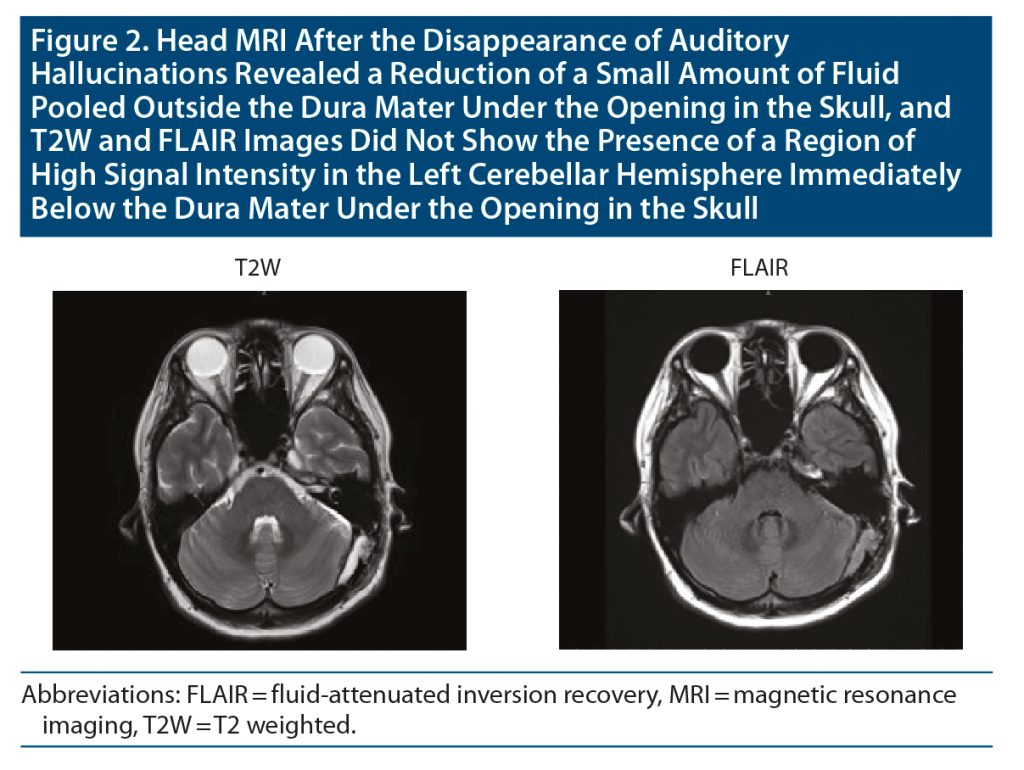 In the present case, auditory hallucinations suddenly appeared after microvascular decompression for left trigeminal neuralgia. Initially, acute transient psychotic disorder or schizophrenia was suspected, but abnormal lesions were observed on the postoperative follow-up head MRI. The same MRI lesions had almost disappeared at the time that her psychiatric symptoms improved. Therefore, her auditory hallucinations may have been induced by the abnormal lesions detected by the MRI, which may have been caused by microvascular decompression.

Miyazawa et al5 reported a case of a 68-year-old woman with visual hallucinations diagnosed as peduncular hallucinosis following microvascular decompression without direct brain stem injury. CT and T2-weighted MRI in their case revealed a high-intensity lesion on the surface of the left hemisphere suspected to represent ischemic edema due to retraction. These neuroimaging findings are quite similar to those of the present case. Miyazawa et al5 suggested that the mechanism of visual hallucinations may be similar to cerebellar cognitive affective syndrome.6 Cerebellar feedback pathways through the thalamus to the cerebral cortex may contribute to peduncular hallucinosis.7 A report8 suggested that microglia-related cerebellar inflammation may be related to psychiatric symptoms. Strong connectivity between the VIIb and IX vermis areas and the visual network has been noted, and this area is also known to have reduced blood flow in schizophrenia patients, which in turn could be a factor in visual hallucinations experience by the patient. The same can be said with hemispheric areas VI, VIIb, and VIII, which show connectivity with the auditory network and could explain auditory hallucinations present in some schizophrenia patients.9,10 It is thus possible that the patient in the present case had a lesion in a different part of the cerebellum than those patients in previous case reports. The patient’s psychiatric and family history may also be related to the emergence of auditory hallucinations in the present case. However, it is unclear as to why no visual hallucinations were observed, and this should be clarified in detail in future studies.