Central and Extrapontine Myelinolysis in the Setting of Hyperglycemia

Osmotic demyelination syndrome (ODS) was first described by Adams et al1 in 1959 as a combination of quadriparesis, pseudobulbar paralysis, and the distinctive myelin loss in the pons, attributable to alcoholism or malnutrition. ODS has since been commonly attributed to rapid correction of chronic hyponatremia. Other reported etiologies include alcohol withdrawal, liver transplantation, hypokalemia, hypernatremia, as well as severe hyperglycemia2–6 (Supplementary References [e1–e20]). Here, we describe a case of ODS associated with diabetic ketoacidosis and review the existing literature on hyperglycemia-related ODS.

A 61-year-old right-handed man with type II diabetes mellitus, hypertension, hyperlipidemia, and necrotic fasciitis of his right lower extremity was found unconscious and brought to the emergency department. On presentation, the patient was lethargic and hypotensive (blood pressure: 85/50 mm Hg). Initial laboratories showed hyperglycemia (700 mg/dL), high anion gap (25 mEq/L), elevated serum ketones (3.37 mmol/L), and hyperlactatemia (5.8 mmol/L). He was treated for diabetic ketoacidosis and sepsis, followed by a right above-knee amputation. The neurology service was consulted on day 7 due to persistent dysarthria, disorientation, and quadriplegia despite resolution of hyperglycemia and sepsis.

On neurologic assessment, the patient was alert and oriented to self but unable to provide a clear timeline for his symptoms. His cranial nerve examination was intact. The motor examination was notable for quadriplegia with trace movements in the legs, hyperreflexia, and a positive Hoffman sign. The sensory examination was intact to light touch, pin prick, and proprioception.

The cervical-spine magnetic resonance image (MRI) was unremarkable. Brain MRI showed symmetric diffuse bilateral diffusion restriction and T2 fluid-attenuated inversion recovery abnormalities in the bilateral perirolandic regions, occipital lobes, and pons without contrast enhancement suggesting ODS (Figure 1). Cerebrospinal fluid analysis was within normal limits (white blood cells = 1/mm3, red blood cells = 1/mm3, protein = 46 mg/dL, glucose = 73 mg/dL with a serum glucose = 102, negative gram stain and meningitis/encephalitis panel). His serum sodium levels were within normal limits at admission and remained stable throughout hospitalization. There was a drop in serum glucose levels from 700 mg/dL to 245 mg/dL and change in osmolarity from 377 to 347 mOsm/kg on the first day of hospitalization (Supplementary Figure 1). Based on clinical and radiologic features, and in the absence of other etiologies, we suggest that the findings were due to the hyperosmolar state secondary to diabetic ketoacidosis. 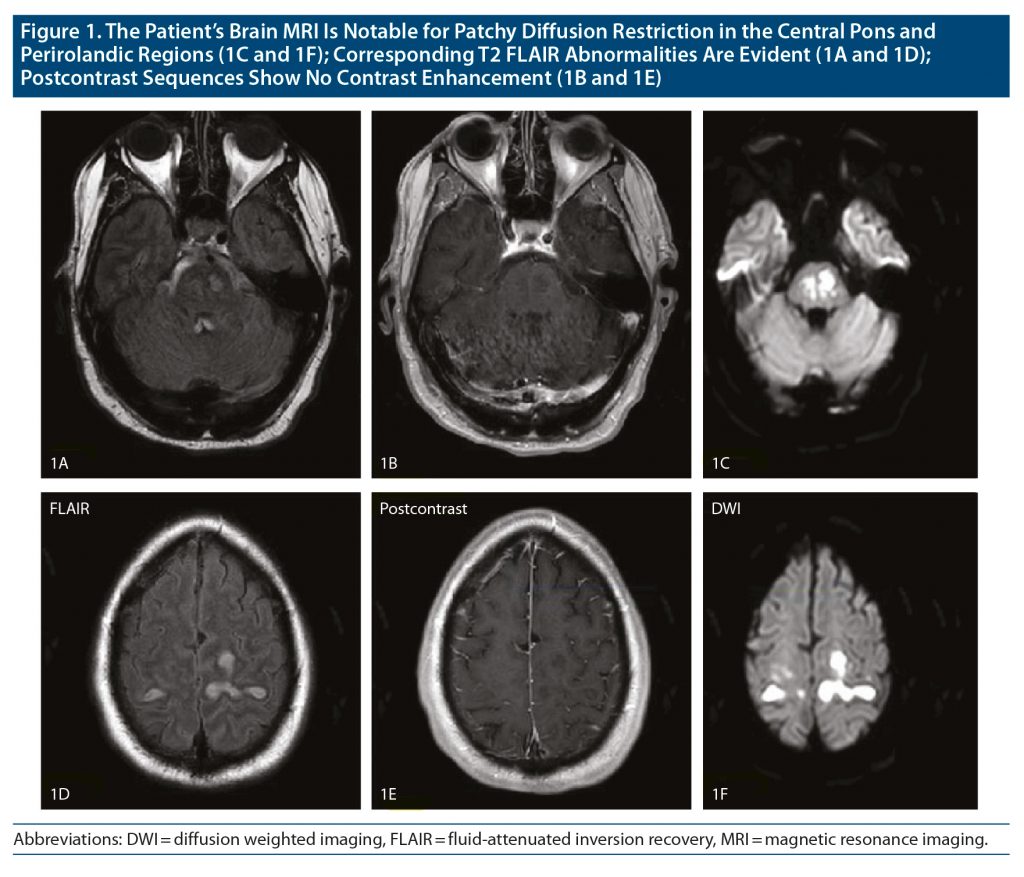 He was discharged for intense patient rehabilitation after 24 days of hospitalization. Upon discharge, he was completely alert and oriented and able to lift the amputated stump of his right leg and move his left leg within the plane of gravity. He demonstrated trace movements in his left arm. No significant improvement was seen in the right arm at discharge. No further clinic follow-up is available at the time of this writing.

There are 2 possible explanations for the pathogenesis of ODS, osmotic shifts due to rapid correction of the hyperosmolar state, or a hypertonic insult that overwhelms the neuronal compensatory capacity. Rapid osmotic shifts resulting from rapid correction of a hyperosmolar state lead to an efflux of osmolytes or influx of water into brain cells and cause neuronal damage. This is the proposed mechanism in the rare instances of ODS in the setting of rapid correction of hypernatremia.3,7 An alternative explanation is a hypertonic insult in which the serum or extracellular space becomes hypertonic, overwhelming the compensatory mechanism of neuronal cell bodies and leading to astrocytic lesions and demyelination.3,6 Serum glucose does not contribute to osmolality as much as serum sodium. However, both mechanisms have been proposed to cause ODS with dramatically elevated serum glucose levels4 (Supplementary References [e1–e20]). The duration of glucose and sodium elevation is unclear in most of these cases given their rarity and absence of laboratory data prior to presentation.

ODS prevention is focused on slow correction of the hyperosmolar state.1–3 Treatment of ODS includes supportive care and treating the underlying condition. The outcomes are variable, ranging from near complete recovery to a completely dependent state or even death (Supplementary Table 1). Treatments with glucocorticoids, intravenous immunoglobulin, intravenous thyrotropin-releasing hormone, and plasma exchange have been tried, but additional studies are warranted before their implementation in clinical practice5 (Supplementary References [e8]).

Severe hyperglycemia is an uncommon and possibly underreported cause of ODS. The proposed underlying mechanisms are a direct hyperosmolar insult or the osmotic shifts resulting from the rapid correction of the hyperosmolar state.

Published online: October 11, 2022.
Relevant financial relationships: None.
Funding/support: None.
Patient consent: Verbal consent was obtained from the patient to publish the report, and information has been de-identified to protect anonymity.
Supplementary material: See accompanying pages.