Diogenes syndrome is not a specific disease but a real neuropsychiatric syndrome, characterized by severe domestic squalor, pathological hoarding, lack of insight, and no need for help.1 It was first described almost 50 years ago.2 Since then, many variant descriptions have been proposed, such as senile breakdown, social breakdown, senile squalor syndrome, or syllogomania.3 On the other hand, some do not approve of Diogenes syndrome as an eponym, named after a Greek cynic philosopher that lived in the fourth century before Christ, arguing it has little historical basis.4 At least, 2 alternative eponyms have been proposed. A masculine alternative version would be Plyushkin syndrome, inspired by a man from Nikolai Gogol’s book Dead Souls.5 The feminine alternative version would be Havisham syndrome, named after a woman from the novel Great Expectations by Charles Dickens.6

A 67-year-old woman, living alone in an urban area, was brought to the emergency department for domestic hoarding and squalor in the last 6 months. At reception, a psychiatric disorder was hurriedly assumed by nurses, following the Manchester triage system. The patient looked disheveled and untidy. The interview was difficult because of moderate deafness, mental confusion, and perseverant speech. Vertigo, ataxic gait, and finger-to-nose dysmetria were also present. In her clinical file, there were no psychiatric records, but she was allergic to penicillin and suffered from arterial hypertension, gastritis, and constipation. Two months earlier she had fallen at home, resulting in a traumatic ischiopubic fracture, and was treated conservatively without surgery with dipyrone only. No neurologic or psychiatric disorders were known in her family.

Blood and urine tests, electrocardiography, and chest radiograph were unremarkable. A magnetic resonance imaging brain scan revealed ventriculomegaly plus a 50-mm left cerebellopontine angle tumor (Figure 1). The patient was diagnosed with hoarding disorder and delirium due to a primary neoplasm of meninges (World Health Association, ICD-11 revision codes 6B24, 6D70, 2A01) and transferred to neurosurgery. Brain surgery revealed a giant left petroclival tumor partly compressing the left cerebellum and the cranial nerves of the left brain stem. Pathology confirmed World Health Organization benign (grade I) transitional meningioma. After 4 months in the general hospital ward, the patient was discharged to a continuous care unit. She was submitted to intensive physiotherapy for postsurgical sarcopenia and speech therapy for dysphagia and hoarseness. Nine months later at a follow-up appointment, she was on daily oral omeprazole 20 mg/d for chronic gastritis, bisacodyl 5 mg for constipation, amlodipine 5 mg for arterial hypertension, levetiracetam 1,000 mg for seizure prevention, and quetiapine 100 mg for insomnia. At that time, complete remission of psychiatric and neurologic symptomatology was achieved. 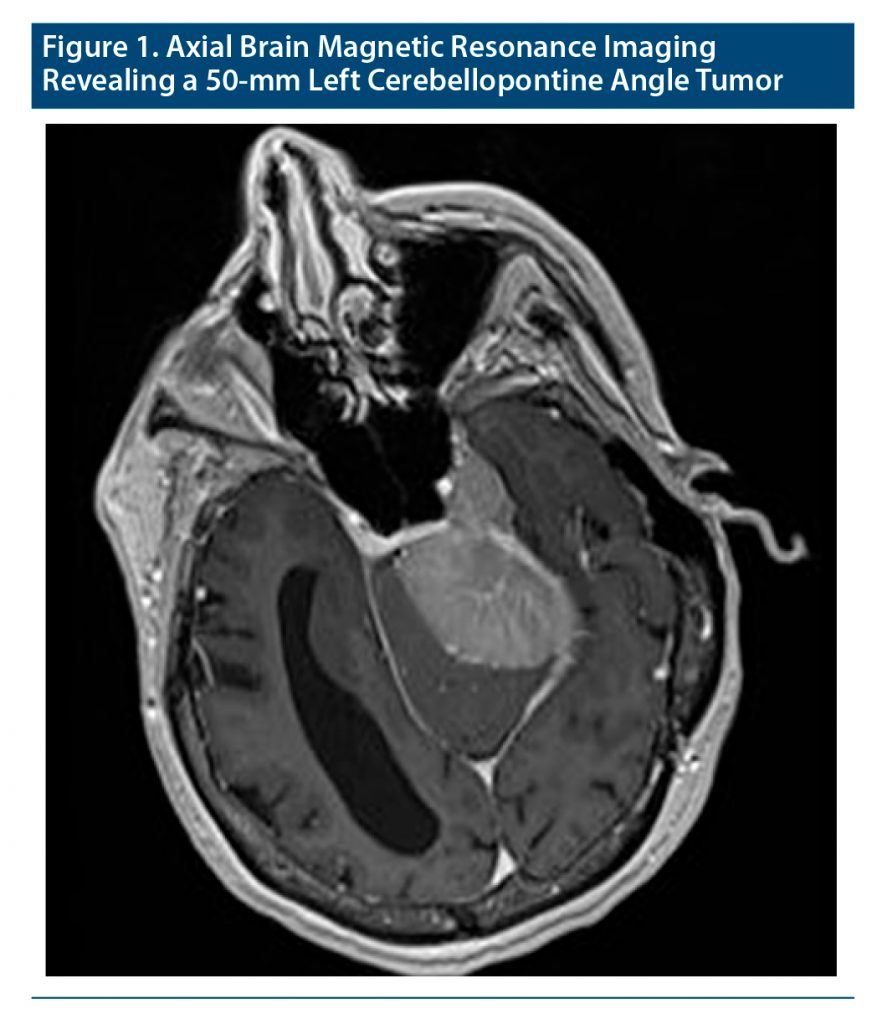 According to a systematic review,7 Diogenes syndrome can be easily associated with dementia (19%) and compromised mobility (19%) but also, less frequently, with falls (9%) and tumors (6%). Diogenes syndrome was also recently described by Sacchi et al,8 16 years after craniotomy for excision of a left parietal meningioma, in a patient with alcohol abuse and frontotemporal dementia. Both cases (Sacchi et al8 and the present case) will most likely become the first of many others to come, as this syndrome spectrum is getting more recognition. Many meningiomas are slow-growing neoplasms.9 But, as cerebellopontine angle is a sensible neuroanatomical area (especially compared with the parietal lobe), it is easy to understand the (years versus months) differences in the natural history of disease between these 2 cases. Indeed, the patient presented here most likely suffered a faster sequence of events involving the local neurocircuits that would correspond to her symptomatology. Presurgical cerebellum compression would explain dysmetria and ataxia, while vestibulocochlear nerve (VIII cranial nerve) compression would explain vertigo and left-side deafness. Indeed, petroclival meningiomas are regarded as one of the most formidable challenges in neurosurgery.10 Therefore, postsurgical damage at glossopharyngeal and vagus nerves (cranial nerves IX and X) could explain transitory dysphagia and hoarseness. Finally, although there were no signs of hydrocephalus, intracranial hypertension would compress frontal lobes, causing not only mental confusion, but also loss of self-awareness with a failure to discard and an innate impulse to take environmental items.11

This case is just another example of many patients sent to our care due to a psychiatric misdiagnosis with no previous brain-imaging examination.12–17 Yes, we are still paying the price for the Cartesian catastrophe.18 But, still, why? Why, in the age of brain scans, is a brain tumor mistaken for a psychiatric disorder?19

Published online: October 13, 2022.
Relevant financial relationships: None.
Funding/support: None.
Patient consent: Permission was obtained from the patient to publish this case report, and information was de-identified to protect anonymity.