When Tears Keep Falling: A Case Report of Pseudobulbar Affect

Pseudobulbar affect (PBA) is a disorder of affect regulation or of emotional expression. The phenomenon was described as early as 1872 by Charles Darwin.1

Since 1969, 3 groups of diagnostic criteria have been described: those of Poeck (1969),2 Cummings et al (2006),3 and Miller et al (2011).4 Clinically, PBA is characterized by paroxistic sudden episodes of exaggerated and uncontrolled emotional expression, usually of laughter or weeping, not necessarily congruent with the patient’s mood, feelings, or situational context.5 We revisit the concept of PBA in this case report.

A 54-year-old man with medical history of high blood pressure, dyslipidemia, and McArdle disease who was a smoker and who was usually medicated with a calcium channel blocker, an angiotensin-converting enzyme inhibitor, and a statin was admitted to the neurology ward (and remained there for 91 days) following an ischemic stroke of the vertebrobasilar territory (Figure 1). 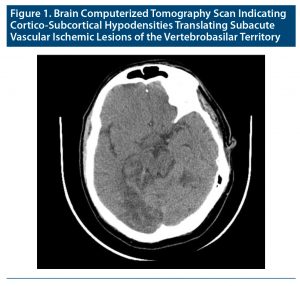 Due to recurrent psychomotor agitation and emotional lability, a liaison psychiatry evaluation was requested. Observation showed the presence of de novo psychotic symptoms (persecutory delusions and complex visual hallucinations) and of PBA (intense emotional lability characterized by episodes of incontinent and copious crying, without any precipitant factor).

PBA mainly occurs in patients with neurologic disorders. It has also been reported in patients with secondary brain lesions of other etiologies, such as brain tumor, aneurysm, or herpetic encephalitis.6 The most commonly associated disorders are Alzheimer’s disease, lateral amiotrophic sclerosis, multiple sclerosis, Parkinson’s disease, stroke, brain trauma, and brain tumor.1,5,6 The exact prevalence of PBA is unknown, and it is reported as being largely underdiagnosed. In stroke patients, PBA is a common disorder, affecting about 1 in 5 survivors in both acute and post-acute phases and 1 in 8 survivors beyond 6 months post-stroke.7 Our patient had a medical history of McArdle disease; however, the association between McArdle disease and stroke or PBA is unknown. McArdle disease is a genetic disorder with an autosomal recessive pattern. Also known as glycogen storage disease type V, it is characterized by a deficiency or complete absence of the enzyme glycogen phosphorylase.8 The most common symptoms are fatigue, weakness, and muscle cramps. McArdle disease has a stable disease course. Complications are usually associated with intensive exercise, which may result in acute rhabdomyolysis followed by acute renal failure.8 This case illustrates the co-occurrence of PBA and psychotic symptoms in a stroke patient.

The likely pathophysiologic mechanism of PBA is the disruption of the cortico-ponto-cerebellar pathway.5 Creating proper affect depends on the involvement of multiple interconnected regions: executive functions in the prefrontal cortex, movement control in the motor cortex, cerebellar coordination, and brain pons (integration, conduction, and emergence of most of the cranial nerves).1 This mechanism postulates that affect expression is modulated by multiple cortical areas, with afferent connections between the motor cortex, the prefrontal cortex, and the cerebellum, through the ventral portion of the pons. Thus, any disorder, either degenerative or traumatic, that interrupts these connections might result in affect dysregulation. Cerebellar cortex also has an important role in cognition, empathy, and affect modulation.1

PBA is sometimes misinterpreted as a psychiatric disorder (depressive disorder, bipolar disorder, or posttraumatic stress disorder). Even though mood disorders may share some common symptoms with PBA, presentation and evolution are often different, and their diagnosis requires the exclusion of a medical condition.9

Although none of these disorders exclude PBA diagnosis, treatment usually directed against these disorders most likely will not improve affect dysregulation symptoms.1 The only approved pharmacologic treatment for PBA is dextromethorphan and quinidine (none are approved in Portugal for PBA treatment). Whenever possible, underlying conditions to PBA should be treated. Antidepressant treatment and behavioral approaches are also described in the literature.1,10

Interdisciplinary work is fundamental in mental illnesses, and neuropsychiatric disorders are a representative paradigm of the necessity of a unified vision of mental disorders. In this case report, proximity work between liaison psychiatry and neurology services allowed a correct diagnosis of the neuropsychiatric disorder (PBA) and an individualized and targeted therapeutic approach.