Effect of Tandospirone, a Partial Agonist of the 5-HT1A Receptor, in a Patient With Chronic Poststroke Emotional Incontinence With Anxiousness

Effect of Tandospirone, a Partial Agonist of the 5-HT1A Receptor, in a Patient With Chronic Poststroke Emotional Incontinence With Anxiousness

Mood and emotional disturbances might occur after a stroke and can be classified into several clinical phenotypes.1 Poststroke emotional incontinence (PSEI) is one of these clinical phenotypes and is characterized by excessive and inappropriate emotional expressions. A recent review1 posited that damage involving serotonergic fibers ascending from the raphe nuclei to the hemispheres is probably important in the pathogenesis of PSEI, and administration of selective serotonin reuptake inhibitors (SSRIs) is effective in treating PSEI in acute or subacute patients. To the best of our knowledge, however, there are no reports about patients with a chronic course of PSEI. We report a case in which tandospirone,2 a partial agonist of the 5-hydroxytryptamine-1A (5-HT1A; serotonin-1A) receptor, was effective for a poststroke patient with SSRI-resistant chronic emotional incontinence with anxiousness. The drug is a member of the azapirone class of drugs such as buspirone and gepirone.

Mr A, a 70-year-old man, had a hemorrhagic stroke in the brain stem at the age of 62 years, then he began to have right hemiplegia. Emotional incontinence and unexpected excessive anxiousness appeared about 4 months after the onset of the stroke. These symptoms disappeared after treatment with 100 mg/d of sertraline. As the discontinuation of the drug rendered the patient to relapse into the PSEI after several months, treatment with 20 mg/d of escitalopram was then continued for about 6 years.

When Mr A was 69 years old, emotional incontinence gradually became noticeable despite the continuation of the escitalopram. At the age of 70 years, he became aggressive to the extent that he hurt his family. He was subsequently admitted to our hospital.

At the time of admission, the treatment medication had already been changed in the clinic from escitalopram to sodium valproate 400 mg/d, but he still had the symptoms of emotional incontinence and excessive anxiousness. We administered lorazepam 1.0 mg/d, but no clinical response was obtained. Therefore, we changed his medication to tandospirone 60 mg/d, and all of the symptoms disappeared within several days. He was later discharged home.

A marked atrophy was observed in the white matter of Mr A’s brain stem (Figure 1A). The MRI image findings of the case indicated old hemorrhage stroke lesions in the left paramedian region of the upper pontine, involving the median raphe nucleus (MRN) (Figure 1B and 1C). The atrophic change in the brain stem could be mainly caused by axon injury due to Waller degeneration that originated from the primary stroke lesions during the clinical course. The axon injury is more clear in comparison with the control (Figure 1C and 1D). 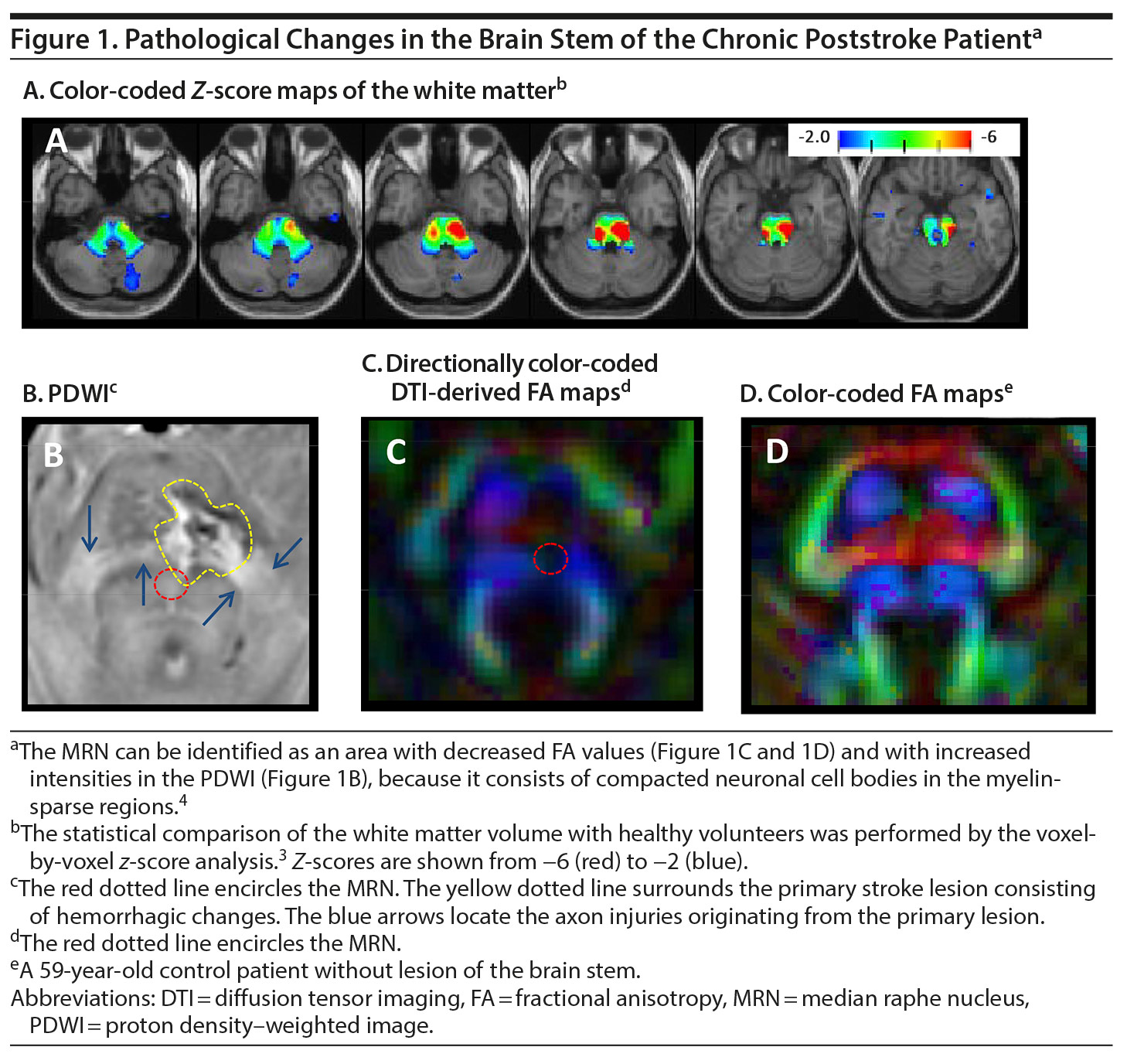 It is likely that the serotonergic nerve dysfunctions occurred due to the stroke lesions involving MRN, resulting in the development of PSEI in the subacute stage. The image findings revealed significant white matter injury in the brain stem, suggesting highly damaged projections of the serotonin nerve fibers from the raphe nuclei to the hemispheres.

In this case of chronic PSEI, tandospirone exhibited a remarkable clinical effect on the symptoms after the clinical response of the SSRI had disappeared during the treatment over several years. In other words, the progression of brain stem lesions in the chronic course might require changing drugs therapeutically effective to the symptoms of PSEI from the SSRI to the 5-HT1A partial agonist. Even after the degeneration of the presynaptic serotonergic neurons targeted by the SSRIs, postsynaptic 5-HT1A receptors in the limbic cortex still remained as action sites of the partial agonist. In addition, the presynaptic nerve damage might induce an upregulation of the postsynaptic 5-HT1A receptors, accumulating clinical responsiveness to the drug.

In summary, this case report suggests that 5-HT1A partial agonists could be one of useful clinical drugs in neurologic disorders involving the serotonergic systems in the brain stem and even in cases when SSRIs are clinically ineffective.

Patient consent: Consent was received from the patient to publish the case.

A. Color-coded Z-score maps of the white matterb