Objective: The number of prescriptions for antidepressants in England has almost doubled in the past decade. The objective of this study was to examine if this growth and seasonal variation in prescribing rates of different antidepressants by general practice are linked.

Method: The number of prescriptions and quantity of antidepressants prescribed each month between January 1, 2014, and December 31, 2019 from the general practice prescribing data reports for each British National Formulary code and practice were analyzed. The data were aggregated to obtain the monthly total and analyzed to identify patterns by medication.

Results: We included all oral antidepressant medications prescribed in England in 2019 for a total of 74 million prescriptions, which was equivalent to 2.36 billion defined daily doses. Monthly variation in daily prescribing percentage of the annual average over the year in total and antidepressant medications showed small but generally consistent seasonal variation, an average of up to 1.61% in total items and 1.47% in defined daily dose (highest prescribing in November/December). The seasonality varied by agents, with agents having highest seasonality also showing the most growth (r2 = 0.5, P = .002). This relation was strongest for mirtazapine and sertraline. There was a clear relation between average seasonality and year on year growth in antidepressant medication prescribing for 2016–2019 (r2 = .536, P = .002).

Antidepressant medication is widely used in primary care. In a recent article,1 we considered how the quality of the patient-practice relationship influences the antidepressant prescribing rate in a primary care general practice in England. One factor not considered was the variation of use within the year, the “seasonality,” which may be a significant factor for local levels of prescribing to treat relatively short-term mood disorders.2,3 Seasonality is in the context of antidepressant prescribing increasing by an average of 4% each year.4

Previous work4 has described month-by-month antidepressant prescribing. Here, we provide an update in relation to the latest available data from England. Some mood disorders can be linked to reduced access to daylight, and our question was whether such seasonal changes link to the volume of antidepressants prescribed. For this analysis, we calculated the seasonality factor for each medication and determined if it could be used to describe the growth in their prescribing.

We examined the way that agents licensed to treat major depressive disorder were prescribed in primary care between January 1, 2014, and December 31, 2019 (the National Health Service publishes these data monthly). The analysis was at a general practice level not at the level of individual patient data. Our focus was the month-to-month variation and to determine any patterns.

Monthly general practice prescribing data reports5 for each British National Formulary (BNF) code and practice6 and the prescriptions, quantity, and costs prescribed were examined for all general practices in England. Data from the Quality Outcomes Framework7 returns were utilized. We used the BNF drug name. The amount of active chemical in each item of the prescribed quantity was identified. Defined daily dose,8 which is the assumed average maintenance dose per the World Health Organization Annual Therapeutic Classification,8 was used to estimate the number of individuals on each therapy month on month during that period.

Data are collected from all registered primary care practices in England including some “dummy” practices, which are created to identify prescribing in environments or circumstances outside of general practice, such as specialist clinics, hospices, prisons, out-of-hours services, and training units. Other channels including hospital prescribers are not captured.

All items with a BNF code beginning with 04 (central nervous system) and 03 (antidepressant drugs) were included. To adjust for length of each month, we standardized the prescribing rate by the total number of days in each month including the 29 days in February of 2016 (leap year). To ensure that growth or decline was not a factor, the monthly amount was adjusted by the appropriate proportion of annual change to make all amounts equivalent to a midyear month.

Annual seasonality was then defined as the sum of prescribing in low daylight months in the calendar year (January to March + October to December)/days in the period (182) divided by long daylight months (April to September)/days in period (183). This method was applied to the total in each year and to the individual medications over the whole period. Since average annual growth compounds up over the 5-year period, it was calculated for each medication by dividing the number of prescriptions written in 2019 by those in 2014, taking the fifth root of this ratio and then subtracting 1 to give an annual average percentage increase. No ethics approval was needed, as all data are available and in the public domain.

We considered in detail the medication being prescribed in items, quantity, and defined daily doses during the study period from between 7,876 and 8,568 locations each month. There was little difference between the seasonality calculated using 3 measures, so items (number of prescriptions) was used as the metric.

Monthly variation (Figure 1) was seen in daily prescribing, with the greatest number of prescriptions issued in November and December of each year and the consistent least number in August and July. 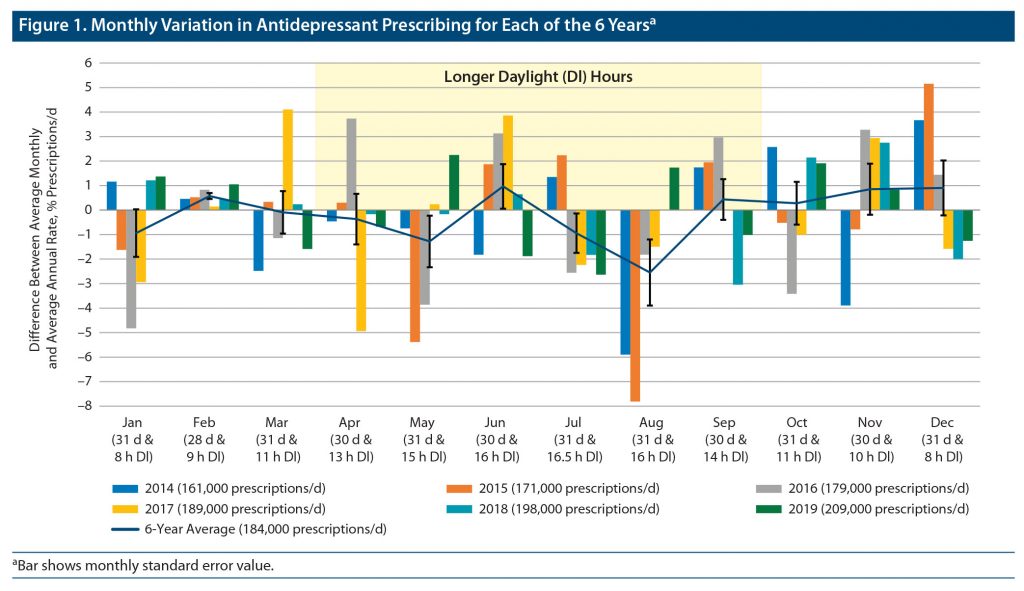 The overall average seasonal variation over the 6 years was 1% and was present in all years except 2016 (Figure 2A), wherein April and June were unusually high and January and October unusually low, which requires further investigation.

There was a clear relation between average seasonality and year on year growth in antidepressant medication prescribing for 2014–2019, which is shown in Figure 3. The univariate analysis resulted in r2 = .536 (P = .002). The relation was strongest for mirtazapine and sertraline. Over the period examined, there was a decline in prescribing for clomipramine, dosulepin, and lofepramine.

Our study shows seasonal variation in antidepressant prescribing, with the peak in November/December and consistent trough in July/August, but also troughs in January and April/May. The seasonal variation was strongest for mirtazapine and sertraline and, if anything, is less than might be expected.

We recently described the pattern of antidepressant prescribing at the general practice (family doctor) level in England and found that selective serotonin reuptake inhibitors were the most prescribed class of antidepressants, with sertraline the most prescribed,9 in keeping with National institute for Health and Social Care Excellence10 guidance. Many factors may relate to the seasonal variation that we have seen, such as return to work after the summer vacation, start of the academic year in the United Kingdom (influencing not just students but their parents as well), and shortening in the length of the day and less clement weather in November/December in the United Kingdom.

We were unable to see new prescriptions, only all prescriptions. Thus, we cannot differentiate prescribing for new presentations versus longer-term prescribing. The small degree of seasonality that we have seen in overall prescribing may point to much greater seasonal variation in new prescriptions. One might expect more initiations in autumn and winter and more discontinuations in the lighter months. Also, something that may be relevant to look at would be light box sales—sales of light boxes to reduce the impact of seasonal affective disorder (SAD) may peak in September/October.

The best evidence in terms of antidepressant use for the treatment of SAD is for the use of sertraline, citalopram, or fluoxetine.11 In SAD, it is usual to start antidepressants in the autumn and discontinue them in the spring, as we have seen here. Cochrane has recently reported that the best evidence for prevention of SAD symptoms is bupropion, although this agent is associated with a greater risk of headaches.12 We were unable to review new antidepressant prescriptions for this study. A recent Cochrane review13 looked at psychological therapy versus no treatment, or any other type of psychological therapy, light therapy, second-generation antidepressants, melatonin, agomelatine, or lifestyle changes to determine efficacy and safety of interventions to prevent SAD and determined that the evidence on psychological therapies to prevent the onset of a new depressive episode in people with a history of SAD is inconclusive. The review13 concluded that the treatment selected should be strongly based on patient preferences.

The relation between growth in the prescribing of antidepressants year on year and seasonality in prescribing has not been described previously. We speculate that this seasonal variation may occur because patients self-modulate their requirement for repeat prescriptions in the spring and summer months if they feel that things are going in the right direction

We analyzed national prescribing data. However, this is at the general practice level, not the individual level. We were unable to view new prescriptions from England’s prescribing register. This capability would enhance the visibility of what is happening month to month in the general practices in relation to new presentations of depression or depression/anxiety of such nature and degree as to require pharmacologic intervention.

Submitted: August 5, 2020; accepted October 30, 2020.
Published online: April 1, 2021.
Potential conflicts of interest: None.
Funding/support: None.
Additional information: Any requests for data extracts will be considered by Dr Heald (adrian.heald@manchester.ac.uk) as the corresponding author. As publicly available and general practice–level data were used, with no individual patient data, it was not deemed necessary to seek ethics approval for this study.