Exanthematous Rash With Lurasidone in an Elderly Woman With Schizoaffective Disorder

Exanthematous Rash With Lurasidone in an
Elderly Woman With Schizoaffective Disorder

Alow percentage (2%-5%) of the individuals who are prescribed psychiatric medications have been reported to experience adverse effects.1 This report presents an elderly woman diagnosed with schizoaffective disorder whose psychotic symptoms improved with lurasidone after multiple failed trials of other neuroleptics. However, she developed a rash after taking it. To my knowledge, this side effect has not been previously reported. 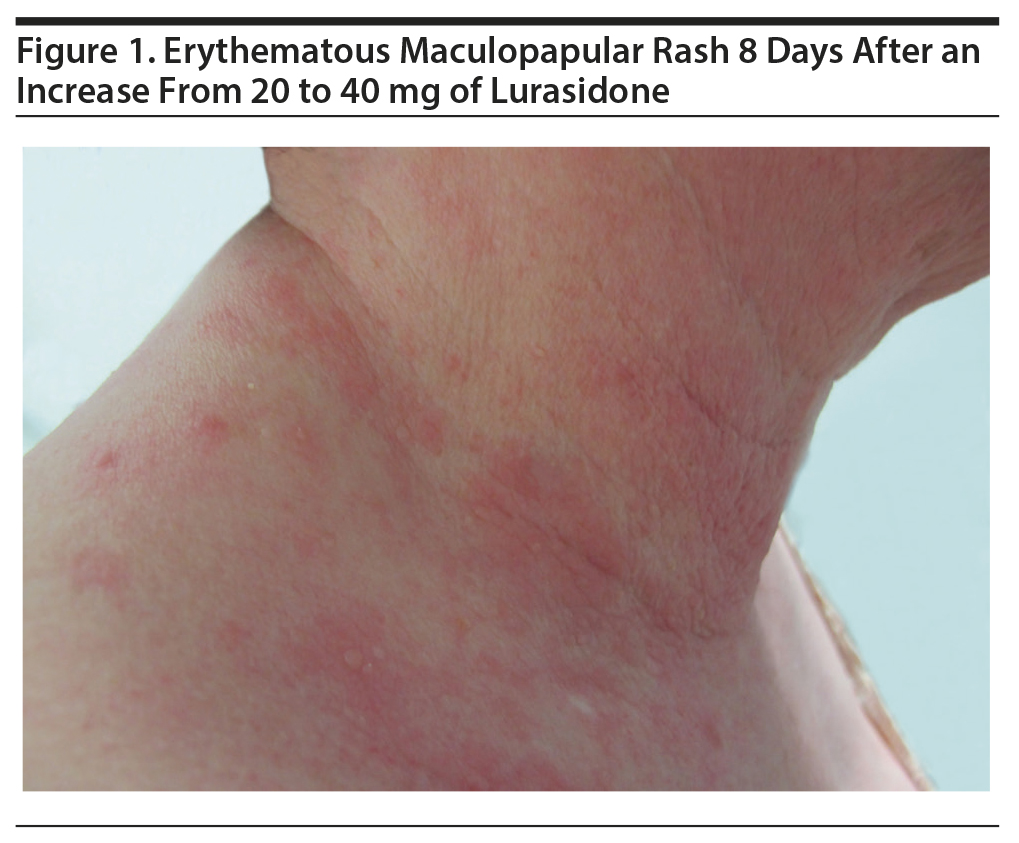 A 72-year-old white woman with schizoaffective disorder was started on lurasidone 20 mg daily on January 27, 2014, and, on February 5, 2014, the dose was increased to 40 mg daily to further help with symptoms. About 8 days after this increase, an itchy, erythematous, maculopapular rash appeared mainly around the neck, upper trunk, and armpits (Figure 1). On February 15, 2014, the dose was decreased to 20 mg, and the patient was given oral diphenhydramine and topical hydrocortisone. This treatment significantly decreased the rash, which gradually resolved.

Given the initial positive response of psychosis with lurasidone, it was postulated that the reaction could have been due to contact dermatitis (possibly due to the excessive use of detergent) or possibly a synergistic effect of topiramate that the patient was concurrently taking. Thus, the dose was increased again to 40 mg on February 19, 2014, and topiramate was stopped. 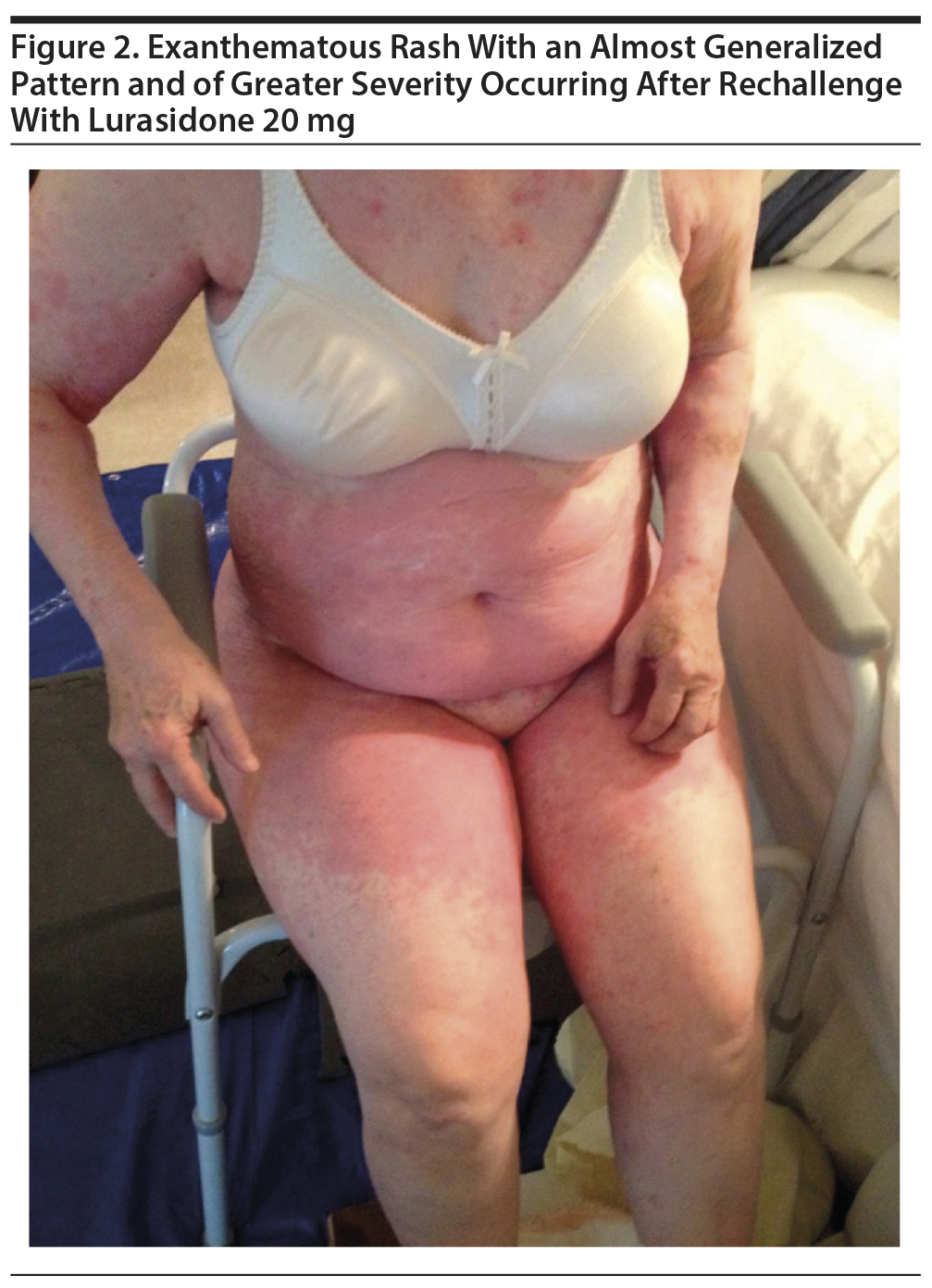 On February 26, 2014, the patient was admitted overnight for sepsis and pneumonia and started on levofloxacin and prednisolone 60 mg with a tapering regimen. However, due to worsening symptoms and altered mental status, she was readmitted to the hospital for pneumonia on March 3, 2014. The dose of lurasidone was decreased to 20 mg due to significant tremors and shaking. No rash was noted at that time. During her hospitalization, the patient continued to be treated with prednisolone with gradual tapering of the dose to 10 mg. However, following its discontinuation, the rash returned with greater severity and had an almost generalized pattern with sparing of the face (as before). The abdomen, thighs, and arms were affected as well, in addition to the neck, trunk, and armpits (Figure 2). Lurasidone 20 mg was stopped and ziprasidone 40 mg twice a day was started on March 9, 2014. The rash gradually resolved after stopping lurasidone. Triamcinolone cream was applied topically. Unfortunately, she developed significant tremors with ziprasidone and was finally stabilized on aripiprazole 4 mg.

This patient remains under my treatment currently. She had been taking topiramate for a year prior to her first presentation until it was stopped to simplify medications after she developed the rash while taking lurasidone. The additional medications received during her two hospitalizations included benzonatate, levofloxacin, mometasone/formoterol, and prednisolone. The patient had taken these medications in 2010, 2013, and 2016 with no adverse cutaneous effects. She remained stable on aripiprazole 4 mg following her discharge in 2014, but over time developed neuroleptic-induced parkinsonism. She was subsequently switched to quetiapine 4 years after her second hospitalization in March, which caused resolution of parkinsonian side effects.

The atypical antipsychotics such as olanzapine,2,3 paliperidone,4 risperidone,5 and aripiprazole6 have been documented to cause skin reactions. Angioedema has been reported as a rare, cutaneous side effect of risperidone,7 clozapine,8 ziprasidone,9 and paliperidone.10

An almost generalized erythematous maculopapular rash is reported with lurasidone in a 72-year-old woman with schizoaffective disorder. The rash initally occurred 8 days after increasing the dose from 20 mg to 40 mg daily and later reappeared with greater severity when rechallenged at 20 mg. Parkinsonian symptoms developed at 40 mg.

Potential conflicts of interest: The author has no financial or other relationships that have influenced the content of this report or could lead to a conflict of interest.

Patient consent: Permission was obtained from the patient’s guardian to publish these photographs. Patient information has been de-identified as much as possible to protect anonymity.