The patient, Ms A, was a married 53-year-old woman, who had completed 6th grade and was working at a pig farm. She had no prior history of personal or family psychiatric disorders. She reported no known medical disorders and was not taking any medication.

In June 2020, she was taken to the psychiatry emergency department complaining that her skin was infested by bugs. She first noticed this in April and believed she had caught the bugs at her work. Ms A stated that she could feel the bugs making tunnels under her skin, adding she could see the “little black bugs” and even had removed some with a tweezer. She had already seen a dermatologist in May, who suggested she had a mental disorder and offered to refer her to a psychiatric appointment, but she refused.

At first glance, Ms A looked very thin and disheveled. On further inspection, there were several self-inflicted lesions all over her body, at different healing stages, produced as an attempt to remove the bugs. A particularly prominent lesion with inflammatory signs on her thigh (Figure 1) warranted an evaluation from a general surgeon, who prescribed piperacillin/tazobactam intravenous for 7 days. The mental status examination revealed the presence of delusional ideas of infestation, visual and haptic hallucinations (formication), insomnia, and a complete lack of insight into her condition. 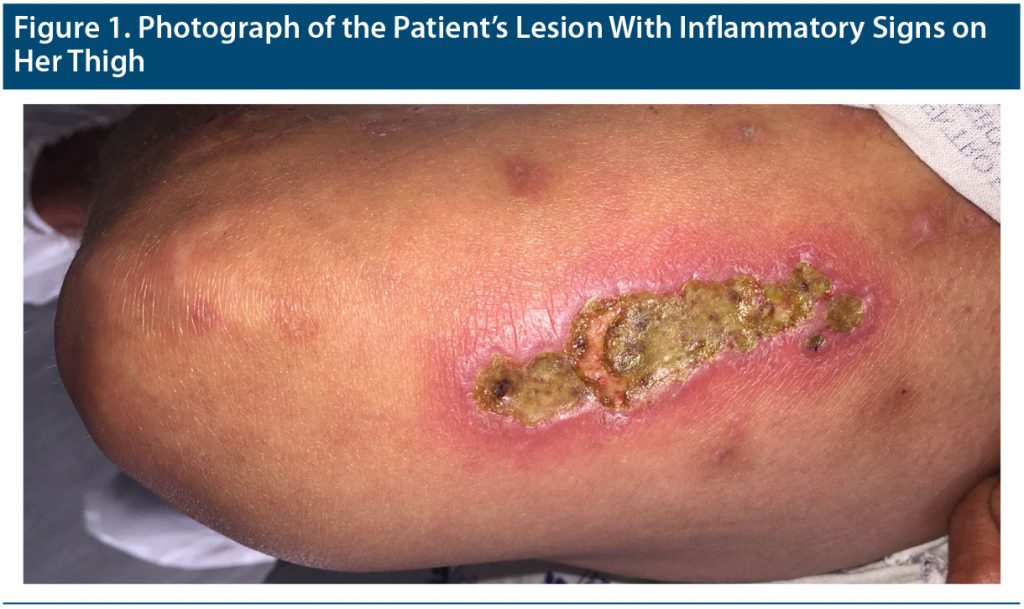 Findings of routine blood and urine analysis were unremarkable. The Mini-Mental State Examination3 results were within the normal range, and the brain computed tomography showed no major findings.

She passively accepted admission to an acute psychiatric ward with the proposed diagnosis of primary delusional parasitosis (per DSM-5 criteria). Antipsychotic treatment with olanzapine was initiated and slowly titrated. During her hospitalization, she revealed that, 1 year prior (June 2019), she started having feelings of sadness and worthlessness, accompanied by a significant loss of appetite (and later weight) and onset of insomnia. She attributed these symptoms to her 1-year-old grandson’s motor deficiency and her daughter being a victim of domestic violence. Major depressive disorder was diagnosed (per DSM-5 criteria), and she was started on mirtazapine, which was later titrated to 30 mg/d.

After 10 days, Ms A asked to be discharged. By then, she achieved partial remission of the depressive symptoms, restoration of the sleep pattern, and decrease in the conviction and dynamism of her delusional ideas of infestation. She had also stopped picking and scratching her skin, and the lesions were healing favorably. Ms A had developed some insight, albeit fragile, into her condition and consented to be referred to a psychiatry appointment. She was discharged with the diagnosis of delusional parasitosis due to a major depressive disorder (per DSM-5 criteria) and prescribed mirtazapine 30 mg/d and olanzapine 15 mg/d. Three months into her follow-up, both the depressive and psychotic symptoms, had fully remitted.

First, the diagnostic process in this case highlights the importance of taking a complete medical and psychiatric history for delusional parasitosis, with obvious implications in its treatment. This case report shares some features with the few reported cases of delusional parasitosis, namely female sex and the insidious onset.1,4 Second, it also exemplifies how these patients, reluctant to see a psychiatrist, often visit other doctors first (namely dermatologists and general practitioners),5,6,7 making the awareness of this entity important for all clinicians. Finally, this case report provides additional evidence to the efficacy of second-generation antipsychotics, namely olanzapine, in delusional parasitosis.1,4,8 Further investigation is necessary to clarify the coexistence of depression and delusional parasitosis.